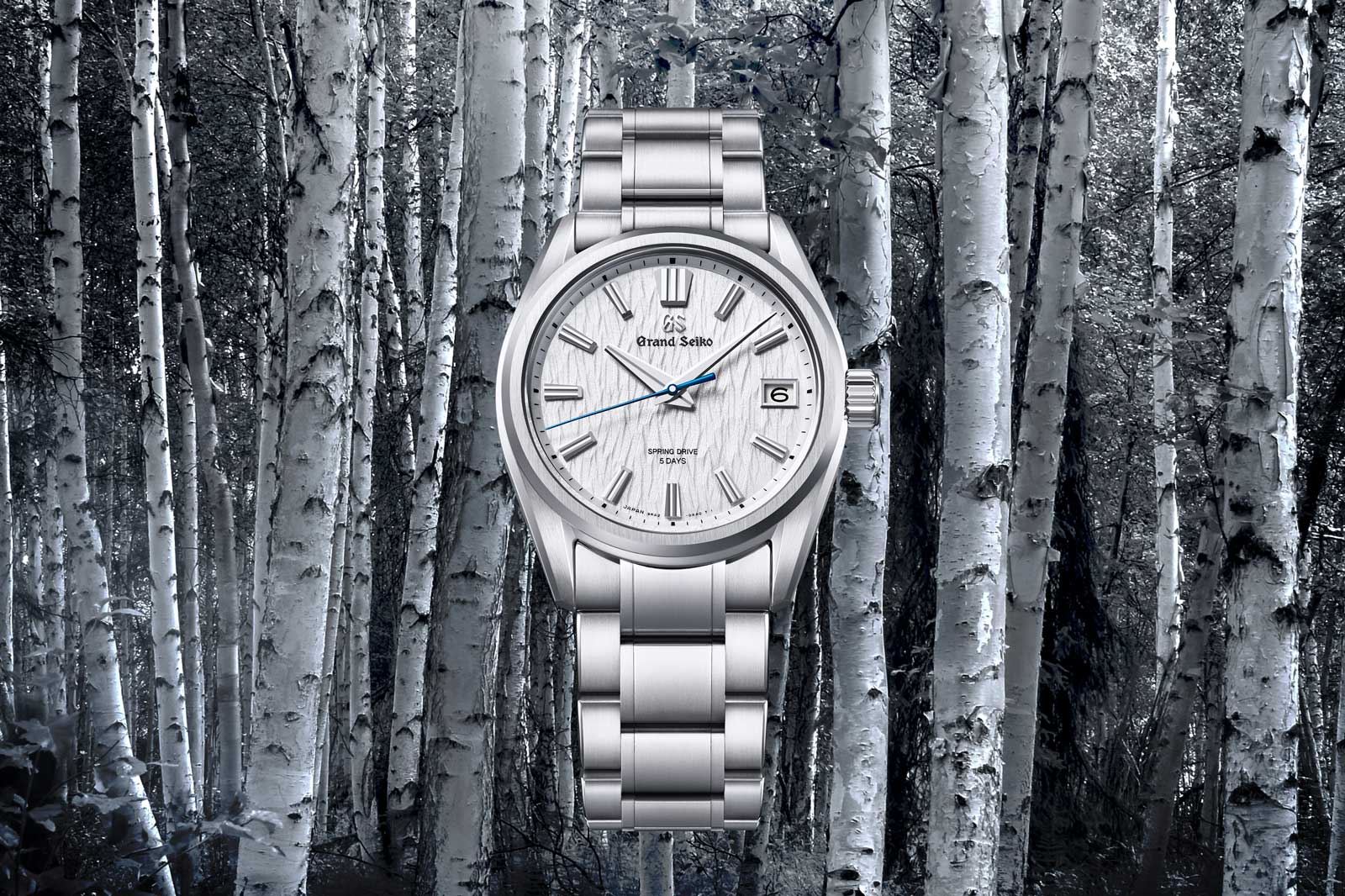 In early 2021, Grand Seiko unveiled reference SLGH005, the first continuous model powered by the groundbreaking 9SA5 Hi-Beat caliber. SLGH005 pulled visual inspiration from the white birch trees (shirakaba) of the Hiraniwa Plateau in northern Japan, informing the distinct texture and pattern on the watch’s dial. With its powerhouse movement and striking aesthetic, SLGH005 was awarded the Men’s Watch prize at the 2021 Grand Prix d’Horlogerie de Genève.

Grand Seiko’s latest, SLGA009 is another interpretation of the white birch theme, this time evoking the white birch tree forests near Shinshu where Grand Seiko Spring Drive watches are produced. It is a natural companion piece to SLGH005, and together the two watches form the foundation of what will be known as the Evolution 9 Collection. 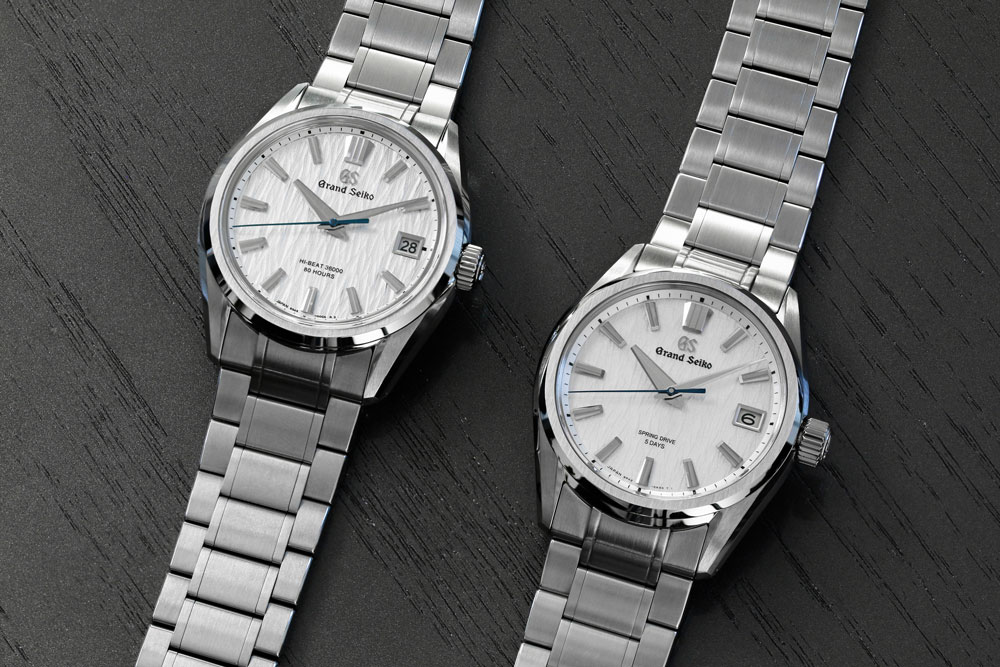 SLGH005 next to the new SLGA009, two expressions of white birch.

The number 9 is used in the naming of all modern Grand Seiko calibers and is featured prominently in the new Evolution 9 Collection. 9 in Japanese is pronounced kyu, and it is represented by the kanji symbol 九. But there is another kanji symbol that is also pronounced kyu, and it translates to “the ultimate.” This link between the number 9 and the idea of the ultimate informs Grand Seiko’s naming convention, emphasizing this new collection as the pinnacle of precision, legibility, durability, and beauty.

Though Evolution 9 certainly pulls from Grand Seiko’s past, namely the “Grammar of Design” or “Grand Seiko Style” standard first embodied by the iconic 44GS from 1967, it is undoubtedly a new, forward-thinking approach to Grand Seiko’s contemporary design language. 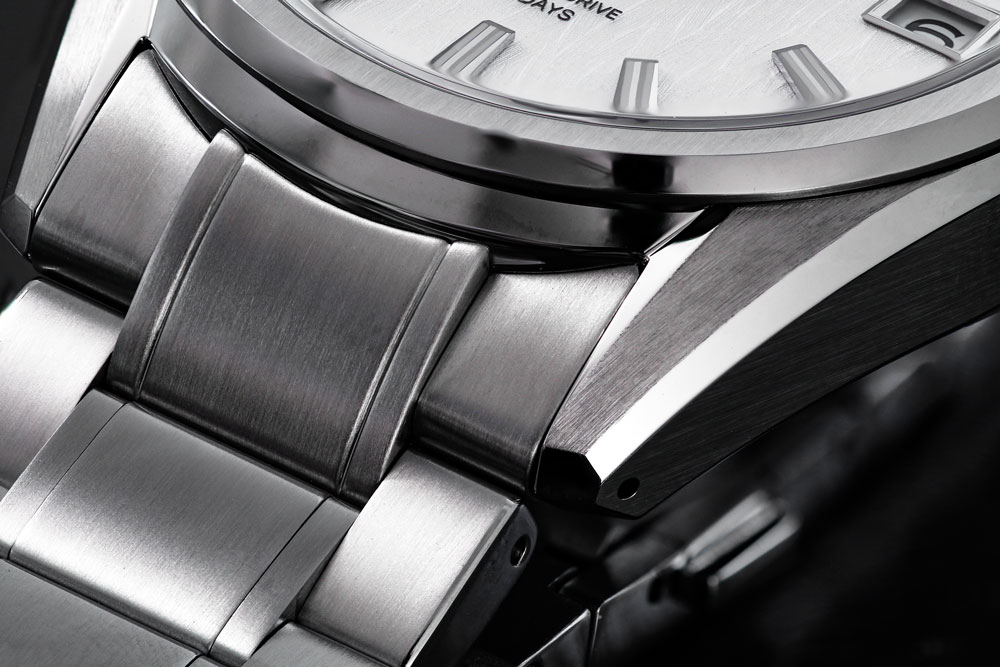 With SLGA009, the Evolution 9 guiding principle emphasizes sharp defined angles, as well as an eye-catching mix of distortion-free mirror polishing placed alongside hairline finishing for the case. Furthermore, the 40mm stainless steel case has been designed to have a lower center of gravity, and the bracelet has just the right width and depth to ensure that the watch sits easily and securely on the wrist. These details together give the watch a sportier feel and make it ideal for daily wear. 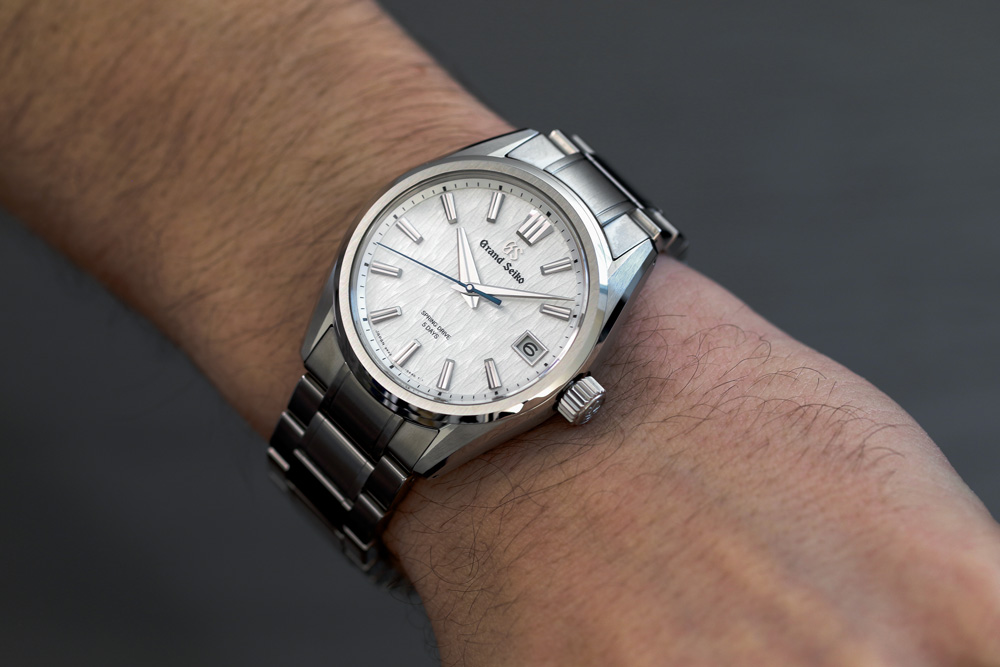 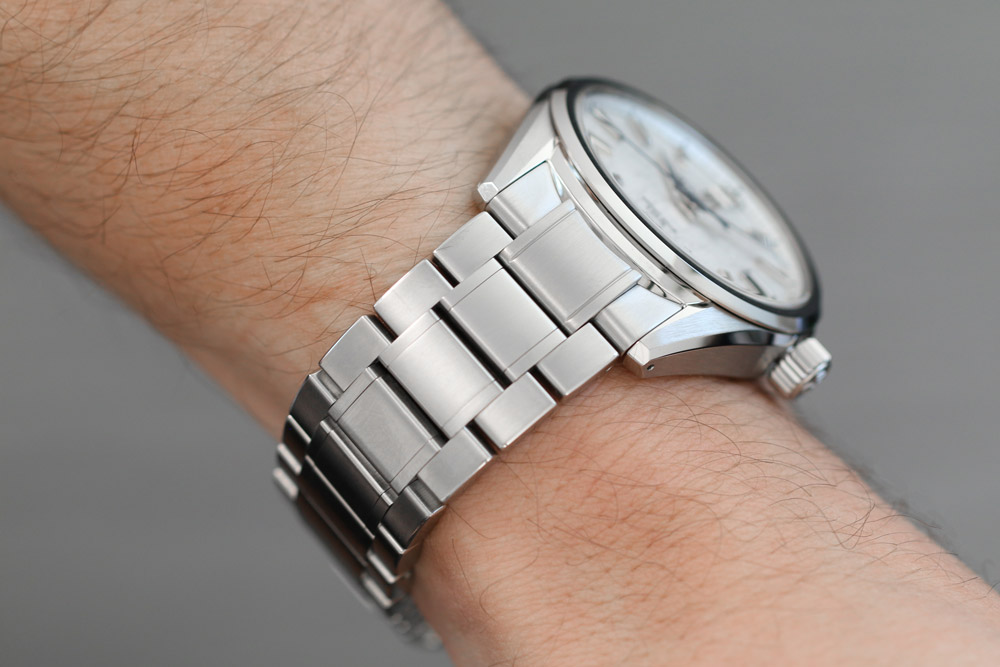 The design’s powerful hands and grooved, prominent markers offer perfect legibility. The hands on SLGA009 are diamond cut and faceted at an angle to capture light, and the granulated stripe running down the center of the hour hand provides contrast against the mirror finishing that covers the rest of the hand. The tip of the hour hand matches the width of the indexes at their tapered end, and the indexes are perfectly faceted to provide contrasting shadows and glimmers of light to enhance their visibility. 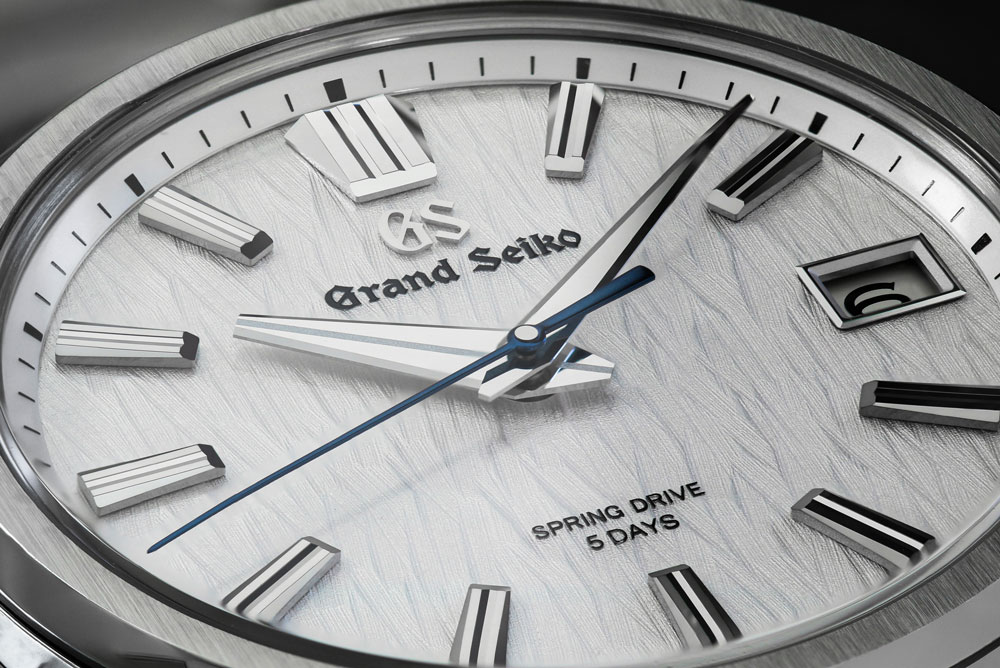 Visible though a dual-curve sapphire crystal with anti-reflective coating, the dial of SLGA009 captures the quiet mood of the white birch tree forests near the studio in Shinshu, where all Grand Seiko Spring Drive watches are crafted and this dial is produced. Unlike the deep, grainy waves of the SLGH005 dial, Shinshu’s interpretation of shirakaba features a dial texture that is subtler and more delicate, evoking Grand Seiko’s brand philosophy, The Nature of Time. This dial treatment pairs beautifully with the “frost” finishing of the movement, whose beauty is clearly visible through the sapphire case back. 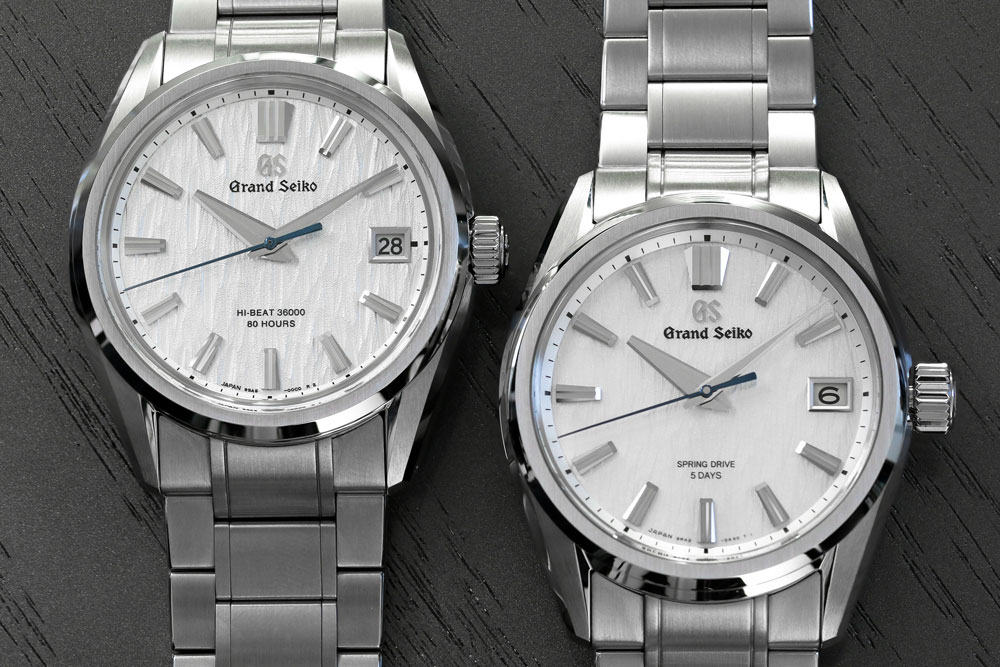 SLGH005 next to the new SLGA009, both the cornerstone of the Evolution 9 Collection. 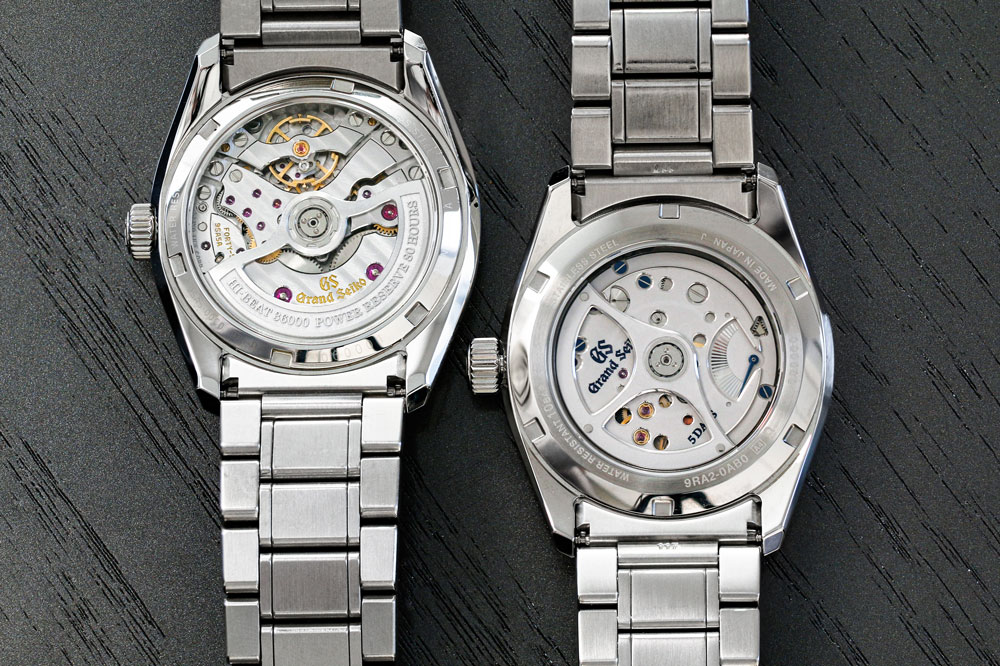 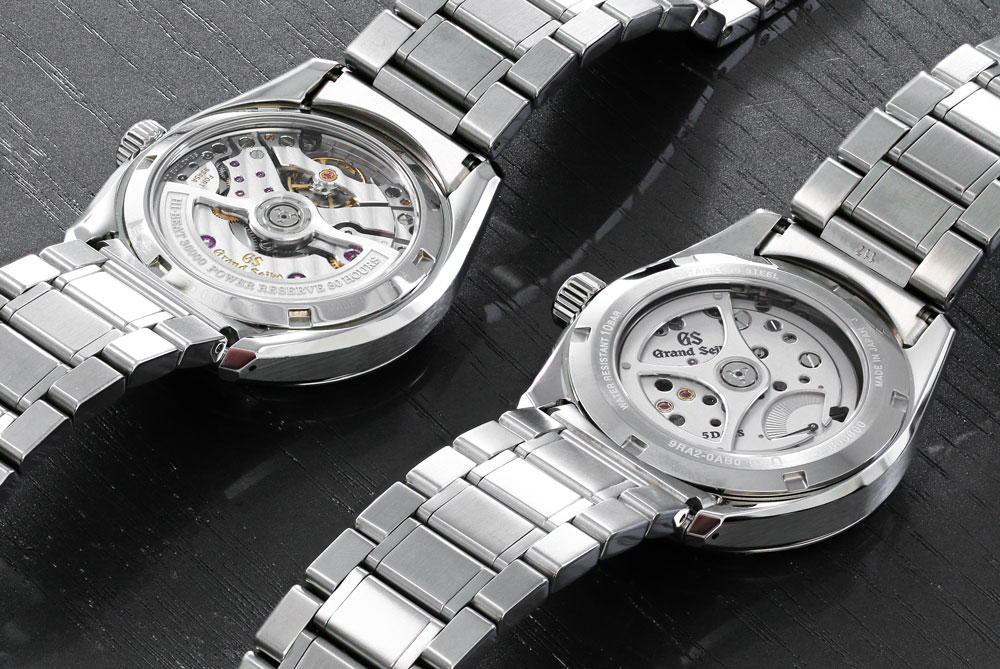 Powering SLGA009 is a caliber that was first introduced in 2021, 9RA2, which itself is an adaptation of the celebrated 9RA5 caliber that Grand Seiko unveiled in 2020. The major difference between the two is the placement of the power reserve indicator, which is removed from the dial on 9RA2 and brought to the movement side so that it is only visible through an exhibition case back.

On a technical level, caliber 9RA2 features the same impressive specs as 9RA5. Through its implementation of two barrels, one of them larger and the other smaller, 9RA2 delivers a power reserve of up to 120 hours without having to make the movement bigger. The +-10 seconds per month accuracy rate is the result of a new Integrated Circuit with a built-in temperature sensor and a highly stable quartz oscillator that has gone through a three-month aging process. Both the quartz oscillator and the temperature sensor are vacuum sealed into a single package, which removes even the slightest temperature difference between the two and ensures the watch’s accuracy at the highest possible level. 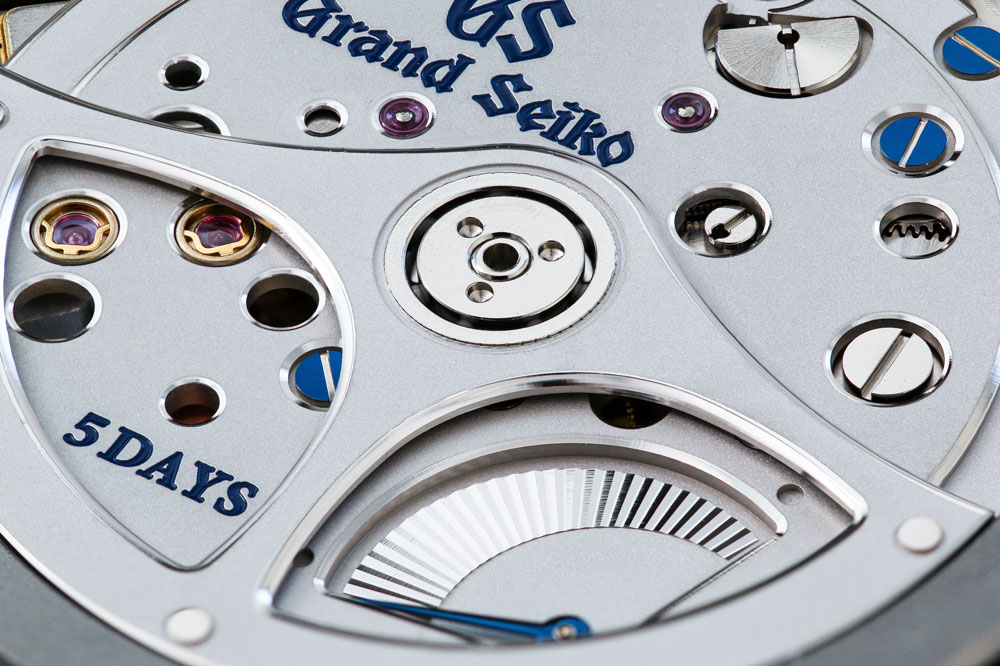 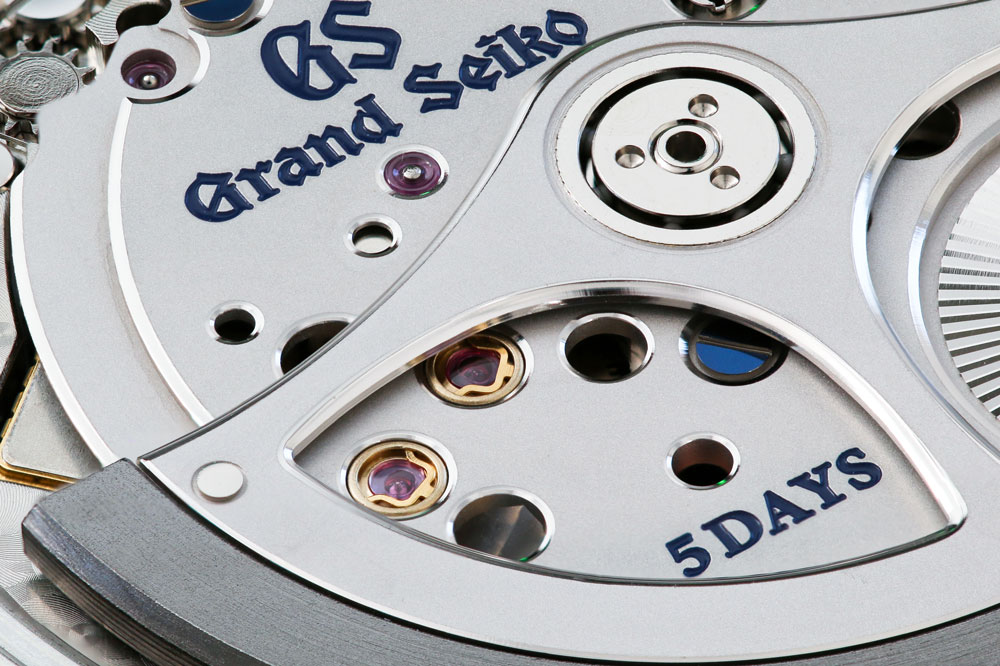 The movement is also notably thinner than past Spring Drive calibers, coming in around 5mm. This in turn allows the watch itself to come in at just 11.8mm in thickness. This notable reduction in thickness is made possible largely due to the re-design and re-positioning of the Magic Lever. Additionally, the new setting of the hands contributes to the slimmer profile of the watch as well. Finally, the gear train was redesigned to fit along the central horizontal axis of the movement and to lock under a one-piece center bridge. This better stabilizes the wheels in the event of a shock, and this was a critical consideration when Grand Seiko’s engineers aimed to make a thinner movement. 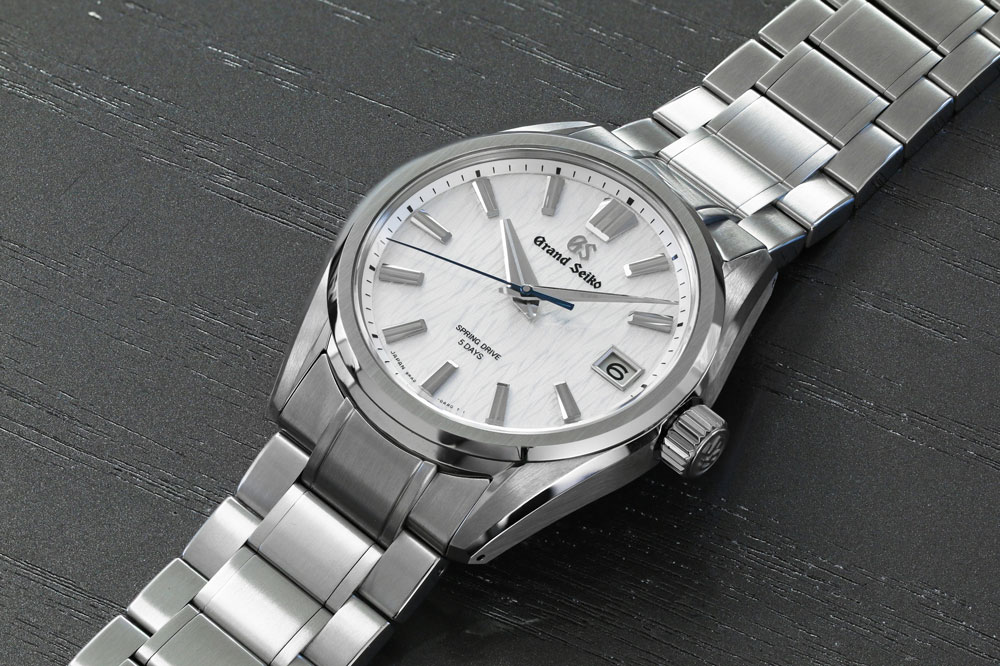 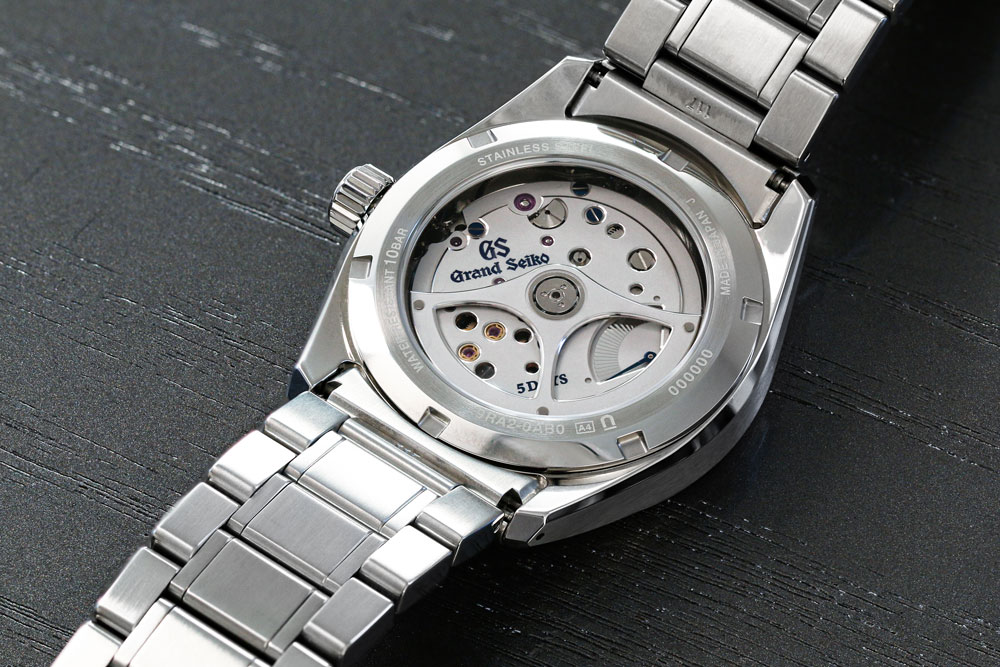 On top of being technically robust, the caliber is also beautifully executed. The delicate texture of the movement’s finish reflects the frost that winter brings to the trees in Shinshu. The bridge lines and hole edges are diamond-cut to reflect light from all angles, and the jewels and tempered blue power reserve indicator add a quiet sparkle that is mesmerizing in person.

SLGA009 will be available at Grand Seiko Boutiques and selected retail stores worldwide in February 2022. 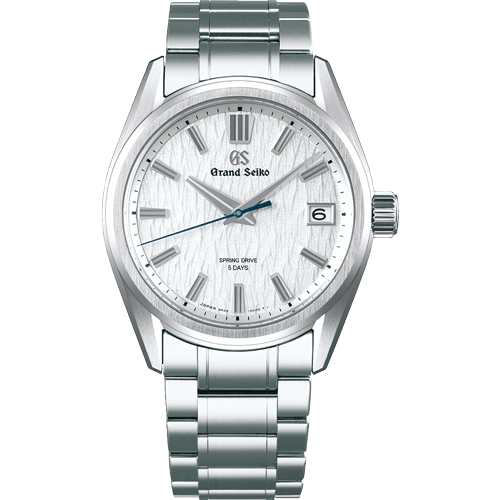 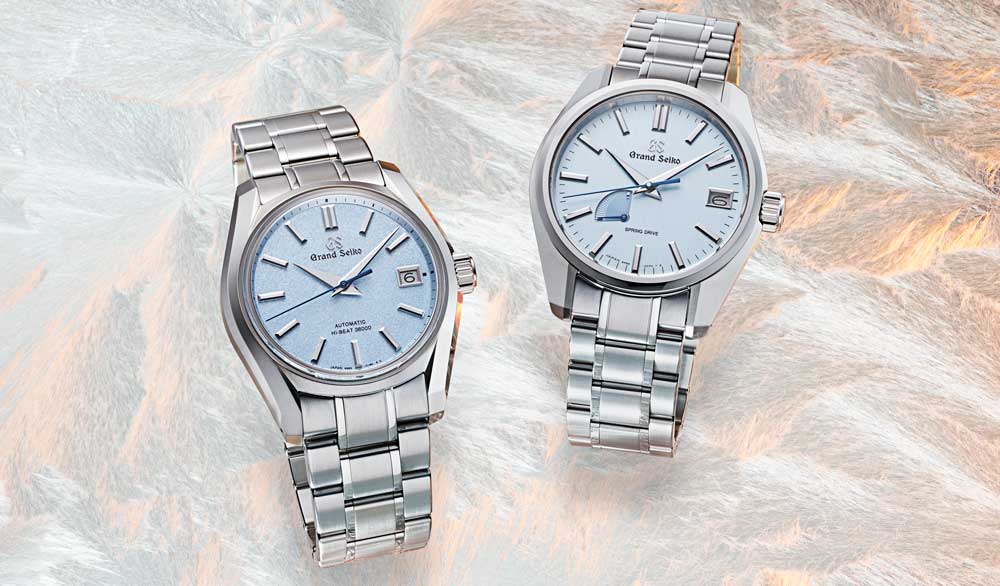 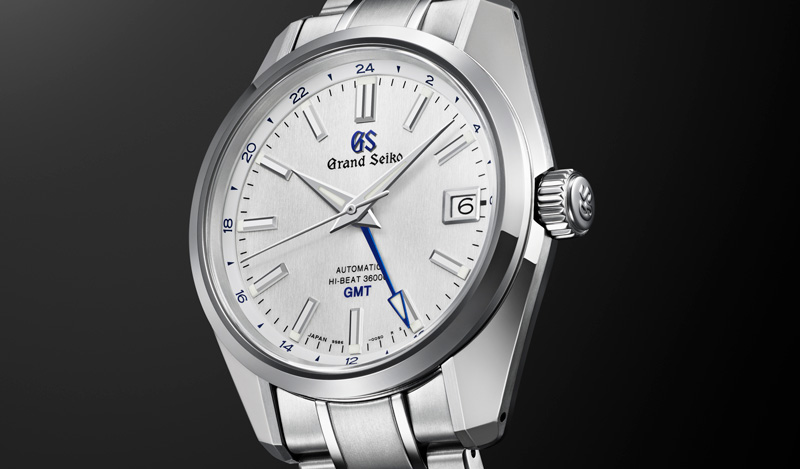 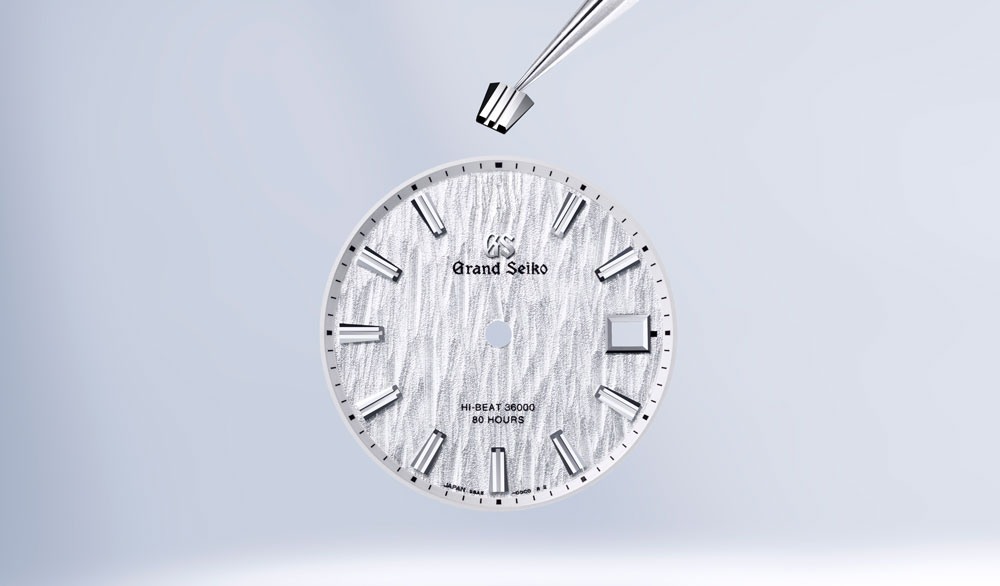 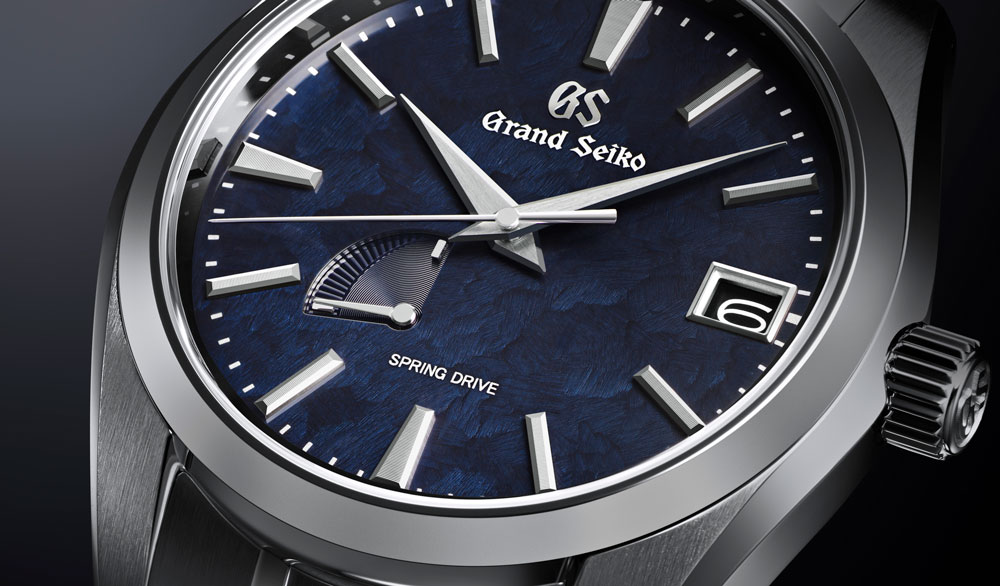