With its tallest summit measuring 3,190 meters high, the renowned Hotaka mountain adorns the skyline from Grand Seiko’s Shinshu Watch Studio in Nagano prefecture, the home of Spring Drive. Formed from volcanic activity and carved by wind and snow over a millennia, its dark peaks and slopes feature sharp ridges and sheer cliffs. This scenic vista serves as inspiration for Grand Seiko reference SBGE277, a Spring Drive GMT in the Sport Collection.

The dial texture here may be familiar to many Grand Seiko collectors. It was previously used on SBGA413, SBGA415, SBGA469, and most recently on SBGE275, a limited edition rendered in stark white with accompanying vibrant blue accents. Where SBGE275 captured the essence of the snow-covered Hotaka mountains, SBGE277 is inspired by the mountain’s visually striking geology. SBGE277 measures 44mm in diameter, 14.7mm in thickness, and 50.8mm in length. Despite its larger dimensions, the case of SBGE277 wears smaller than the numbers might suggest. Several reasons contribute to this. One, for example, is that the case has down-turned lugs that hug the wrist and give the watch the appearance of being shorter from lug to lug. Additionally, normally at three, the crown here is moved right off four o’clock, which makes the case look smaller along its horizontal axis and allows for a more comfortable fit on the wrist. The watch is rated to 20 bar, has a magnetic resistance of 4,800 A/m, and has a see-through case back for admiring the movement. The case is stainless steel, and it features a combination of Grand Seiko’s signature Zaratsu polishing and hairline finishing techniques marking different planes. The rotating bezel bears a hard-wearing sapphire overlay, and underneath the overlay is an application of LumiBrite for nighttime legibility. At 2,500-3,000HV, synthetic sapphire is the hardest of all known oxide crystals, making it almost impervious against scratches.

The dark, rock-pattern dial has large indexes and hands and features Grand Seiko’s LumiBrite compound to ensure nighttime visibility. Framing the dial is a 24-hour chapter ring that can be used in conjunction with the red GMT hand to track a second time zone. Additionally, the 24-hour track on the bezel makes it possible to track a total of three time zones. SBGE277 is powered by Grand Seiko’s Spring Drive caliber 9R66. The power reserve is 72 hours when fully wound and is visible on the indicator next to the eight o’clock index. The hour can be independently adjusted, making it very simple to reset a watch upon arriving in a new time zone.

Available May 2022, the new Grand Seiko Sport Collection model SBGE277 retails for $6,200 and will be available for purchase at Grand Seiko Boutiques and Grand Seiko authorized retailers worldwide. 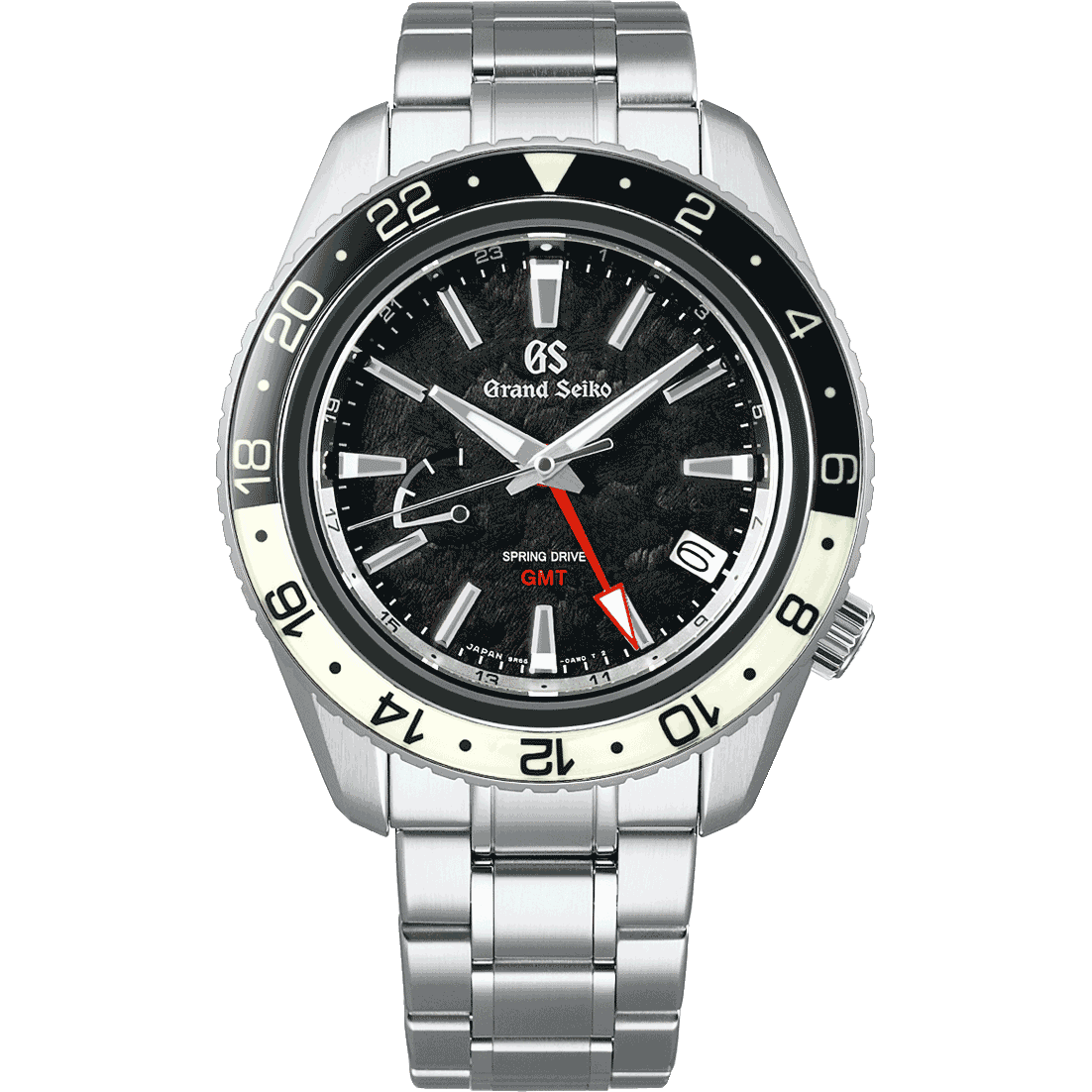 Grand Seiko "Flow of the Seasons" SBGW283 and SBGW285
A pair of classically styled timepieces inspired by the changing seasons of Japan.
Read Article