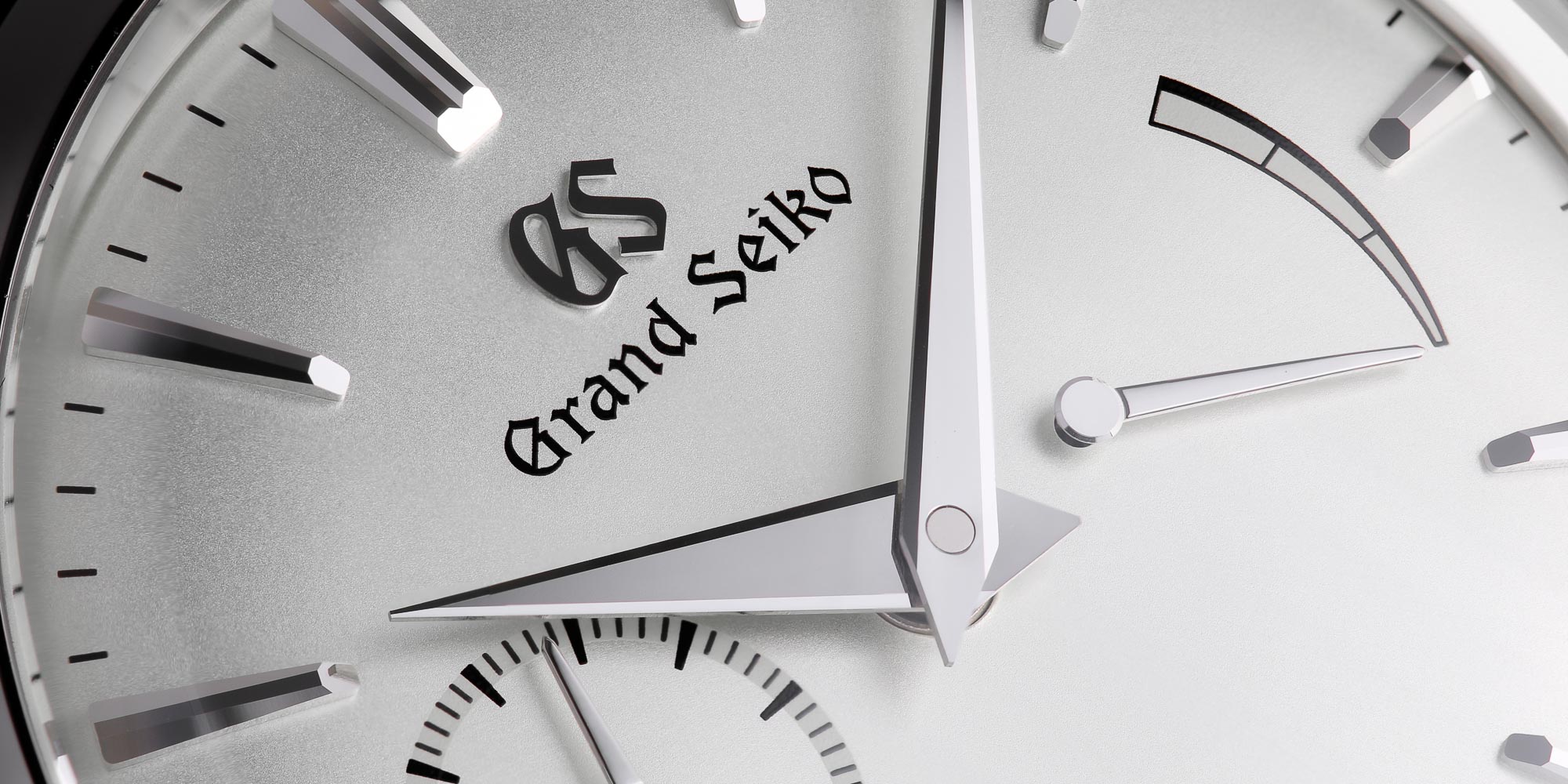 In 2019, Grand Seiko unveiled globally a new series of watches through its Elegance Collection called the “Thin Dress Series.” Featuring an entirely new case and dial design, the Thin Dress Series was produced by the full spectrum of Grand Seiko’s ateliers. References SBGZ001 and SBGZ003 were crafted by the talented watchmakers of the Micro Artist Studio, and references SBGY002 and SBGY003 were produced by the Shinshu Watch Studio, home of Spring Drive. References SBGK002, SBGK004, SBGK005, and SBGK006 – all boasting a new mechanical movement with a small seconds register and power reserve indicator, positioned horizontally on the dial at nine and three, respectively – were produced by what is now Grand Seiko Studio Shizukuishi. (Worth noting is that the latter are the first Grand Seiko watches not to feature a central seconds hand.)

In 2020, Grand Seiko expanded the mechanical line to include two more models, SBGK007 and SBGK009. Today, we’ll be taking a closer at the design of the Thin Dress Series, with a special focus on SBGK007. 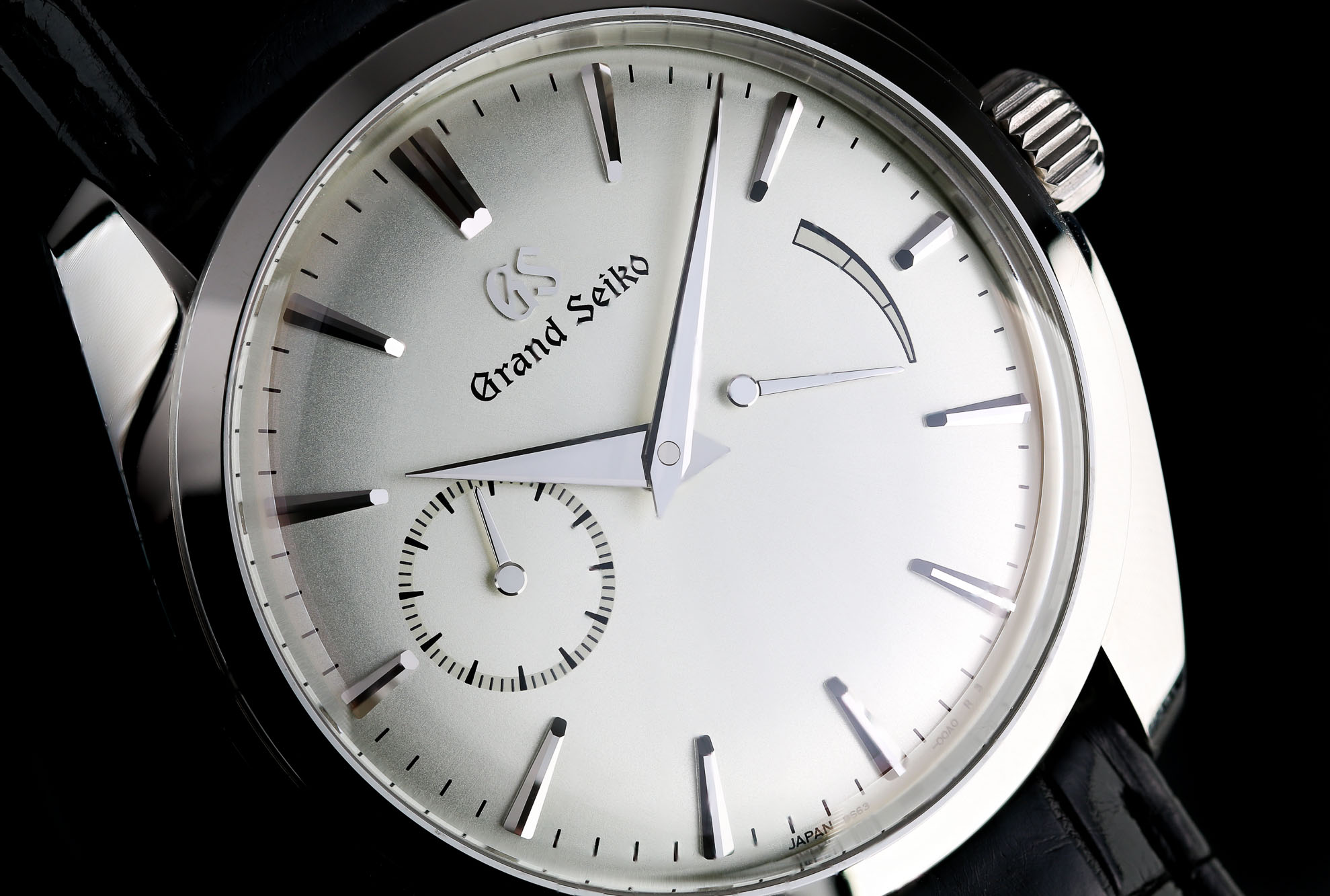 With the Thin Dress Series, Grand Seiko’s goal was to create a slimmer timepiece that could easily slip under a shirt cuff. With the mechanical line, the case measures 39mm in diameter, 11.6mm in thickness, 44mm in length, and 19mm in lug width. Fitted on a two-piece crocodile strap, SBGK007 weighs just 70 grams. From the measurements alone, it is evident that Grand Seiko achieved its aim, but there is much more to the case than just its dimensions that speaks to the success of the design. 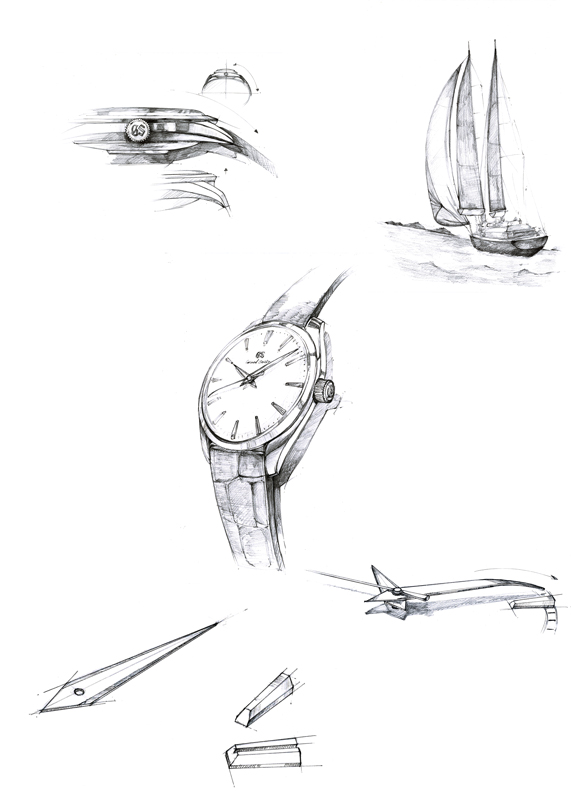 The inspiration for the case comes from the shape of a wind-filled sail. In effect, what we have here is a case without a single straight line. In profile, this curvature is most pronounced, emphasizing the organic nature of the design. What you’ll also note in profile is the complexity of the case despite its relative thinness, especially where the lugs meet the mid-case, and that the underside of the case is concave, which forces the watch to sit closer to the wrist.

The dual-curved sapphire crystal was specially designed for this case. While it adds to the on-paper height of the watch (it is over 2mm in height), due to the way it’s designed the crystal doesn’t actually add anything to watch’s perceived height. This is one of the most challenging crystals for Grand Seiko to produce, and it is carefully polished to prevent distortion of the dial. 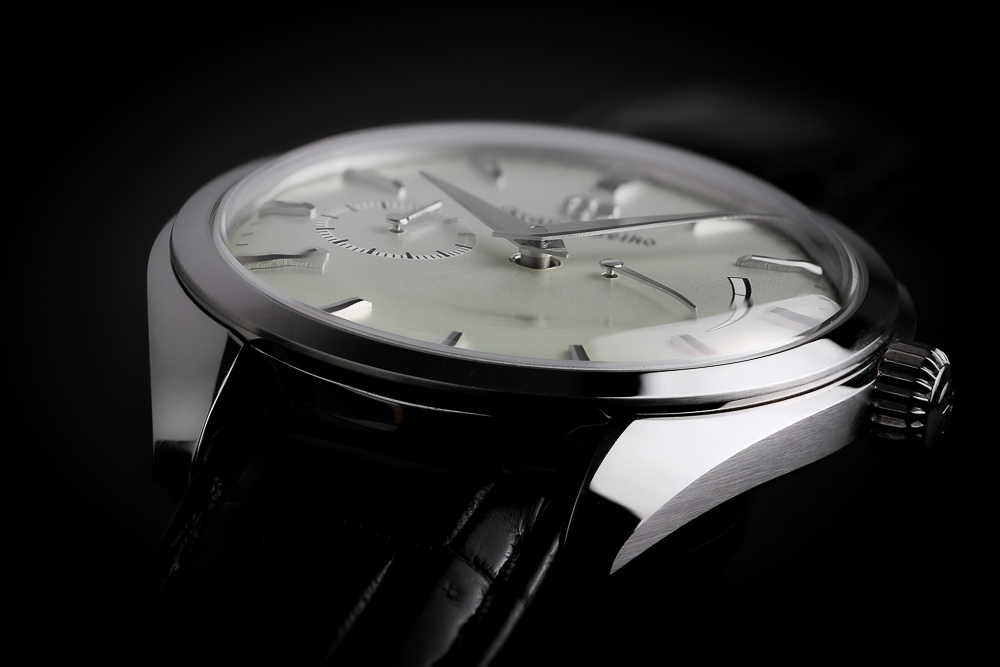 A new adaptation of Zaratsu polishing was developed for this case design.

The case features a mix of high-polish and hairline-finished surfaces. A new adaptation of Zaratsu polishing was developed for this design specifically to address the challenge of creating a distortion-free finish on a curved surface. Generally, a distortion-free mirror finish is relegated to flat surfaces (think of the large, flat lugs of the 44GS case). This makes sense, because the front of the rotating polishing disc is flat, so the craftsperson is polishing a flat case surface against a flat disc. This new method, which involves polishing a curved surface against a flat disc, is far more labor intensive and requires even greater dexterity to get just right. The case sides feature a fine hairline finish, deemphasizing their visual weight. This is another design element that makes the case appear even slimmer, a boon for a dressier timepiece. 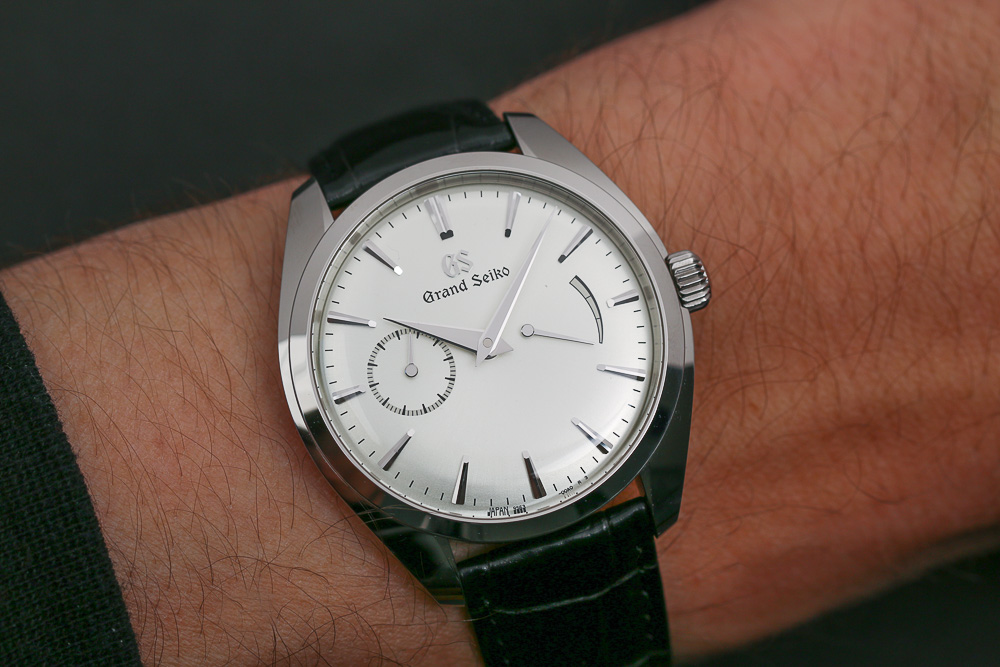 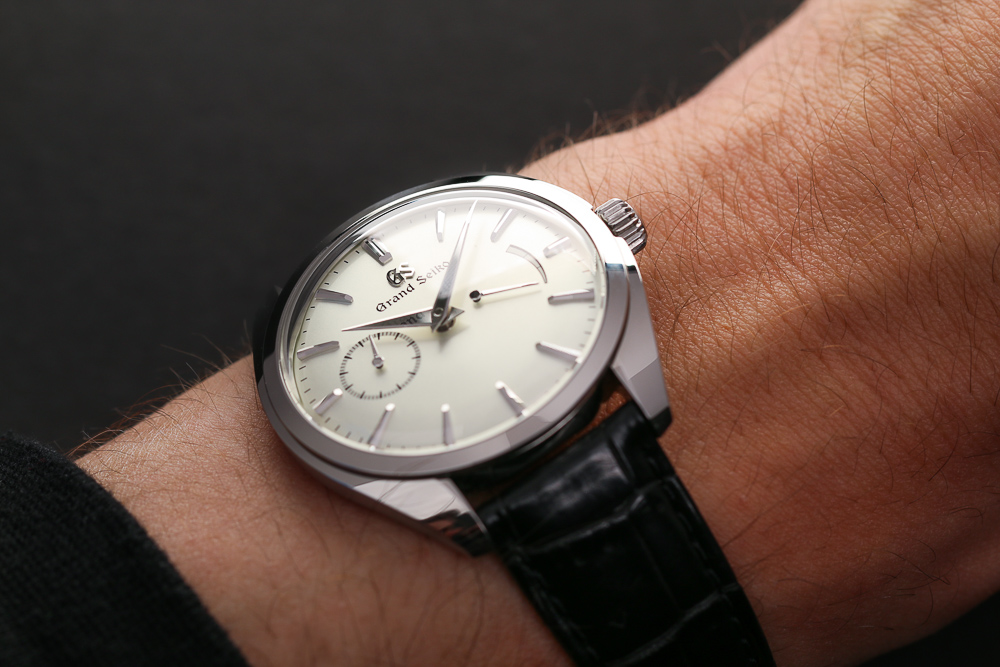 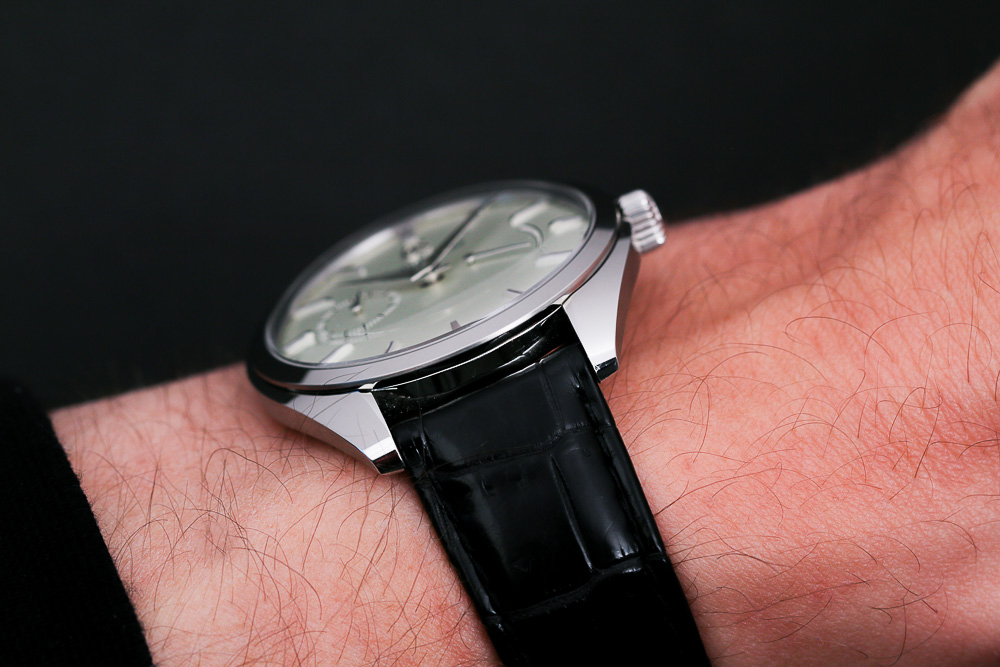 The silver sun-ray dial features many signature Grand Seiko elements – the large, sharp hands; the multi-faceted indexes; etc. – but there are some notable differences in the execution. A new handset and indexes were created specifically for the Thin Dress Series.

Because the dial is curved, the indexes, which are straight and angular along the top, are curved along the bottom to the match the curvature of the outer edge of the dial. Similarly, the power reserve hand and the long minute hand are curved along the edge (this is done by hand). This serves two purposes. The first is aesthetic; like the indexes, the hands are curved to match the curvature of the dial, creating congruity between the two elements. The second is to provide clearance for the hands, especially the minute hand. Without this curve, the crystal would have to be taller, which would then make the watch thicker. As a result, tolerances here have to be extremely tight, both in terms of manufacturing and assembly. 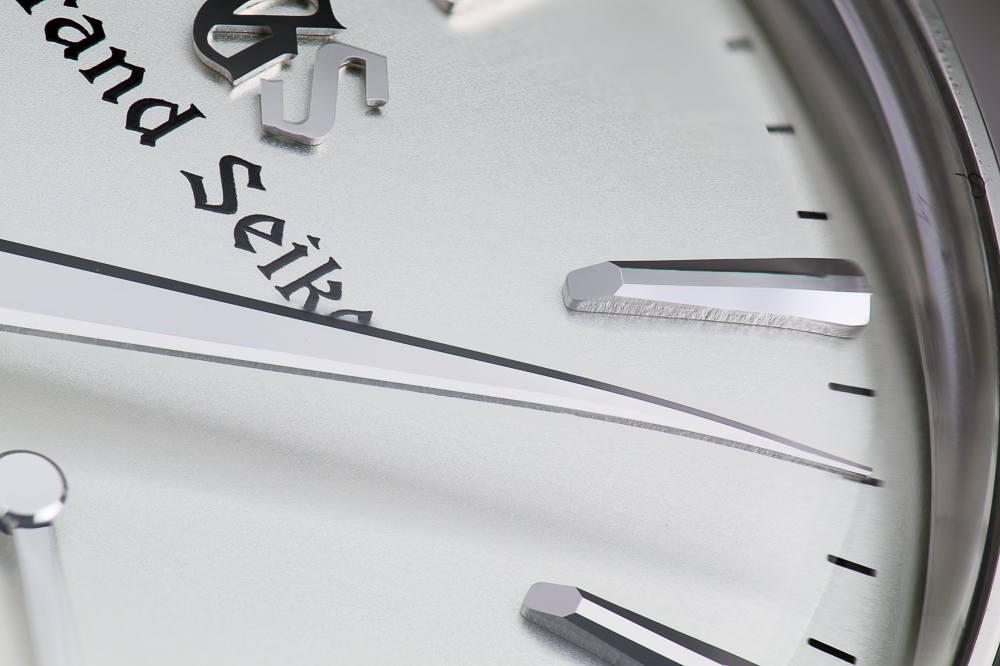 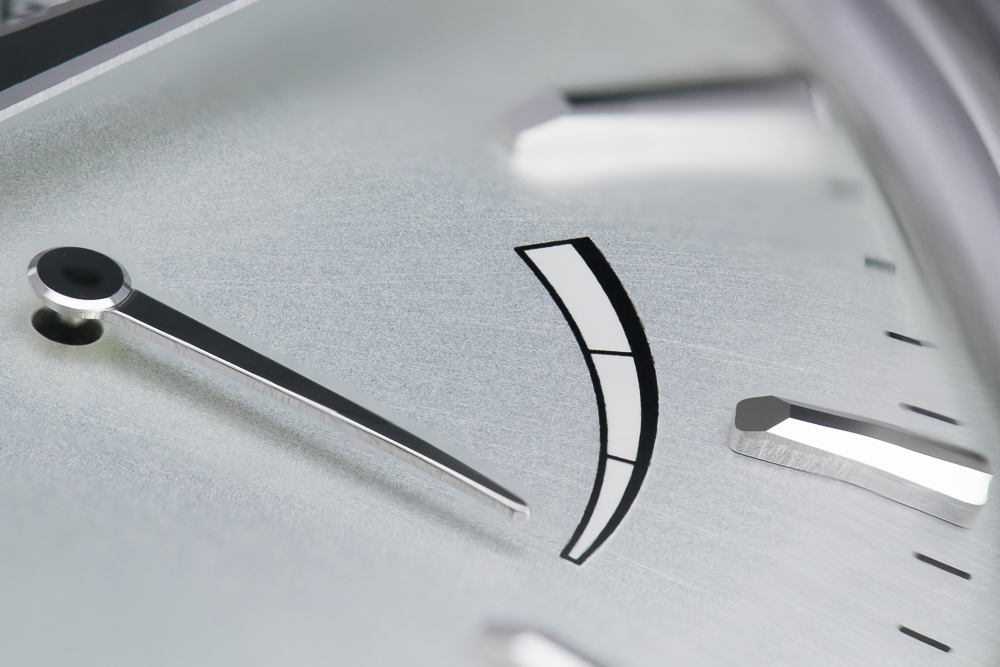 9S63 is a manual-winding caliber based on other 9S6 series movements, specifically the 9S64. However, in order to achieve the unique dial layout with a small seconds register and a power reserve indictor, Grand Seiko had to completely redesign the train. As a result, caliber 9S63 has nearly 20% more components than 9S64.

The movement features 72 hours of power reserve, 33 jewels, accuracy of -3 to +5 seconds a day, and a frequency of 28,800 bph. It also has a magnetic resistance rating of 4,800 A/m or 60 Gauss. It is visible through an open case back fitted with a sapphire crystal. Finishing here is excellent. Grand Seiko’s distinct striping, called Line Gradation Stripes, is front and center, and edges are barrel polished to be perfectly smooth. 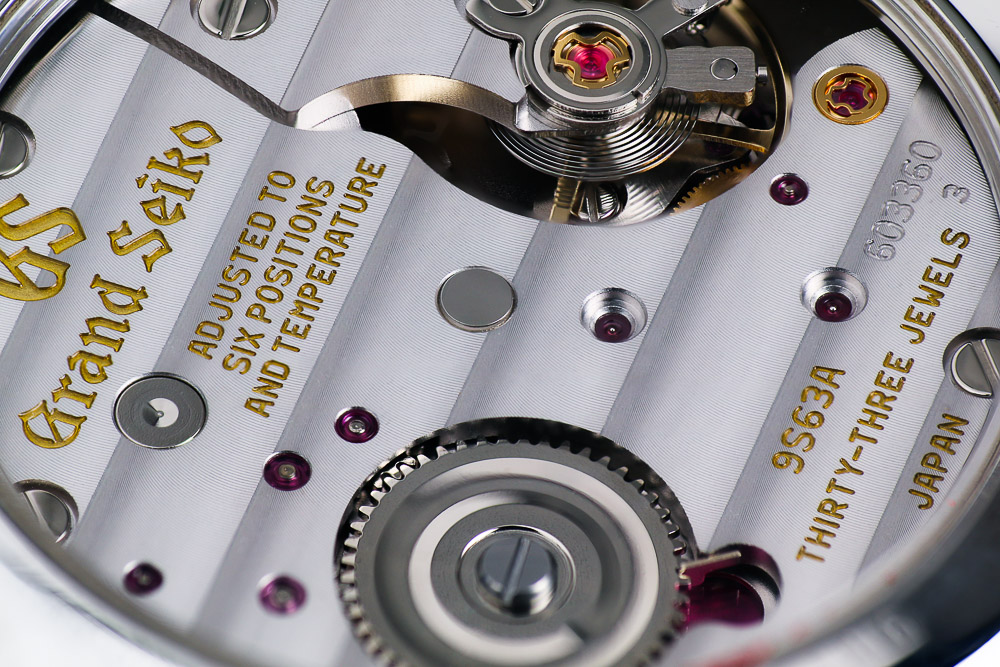 SBGK007 is $6,900, and it is available from Grand Seiko Authorized Dealers (Master Shops and Salons), Boutiques, and the GS9 Club Shop for members only. 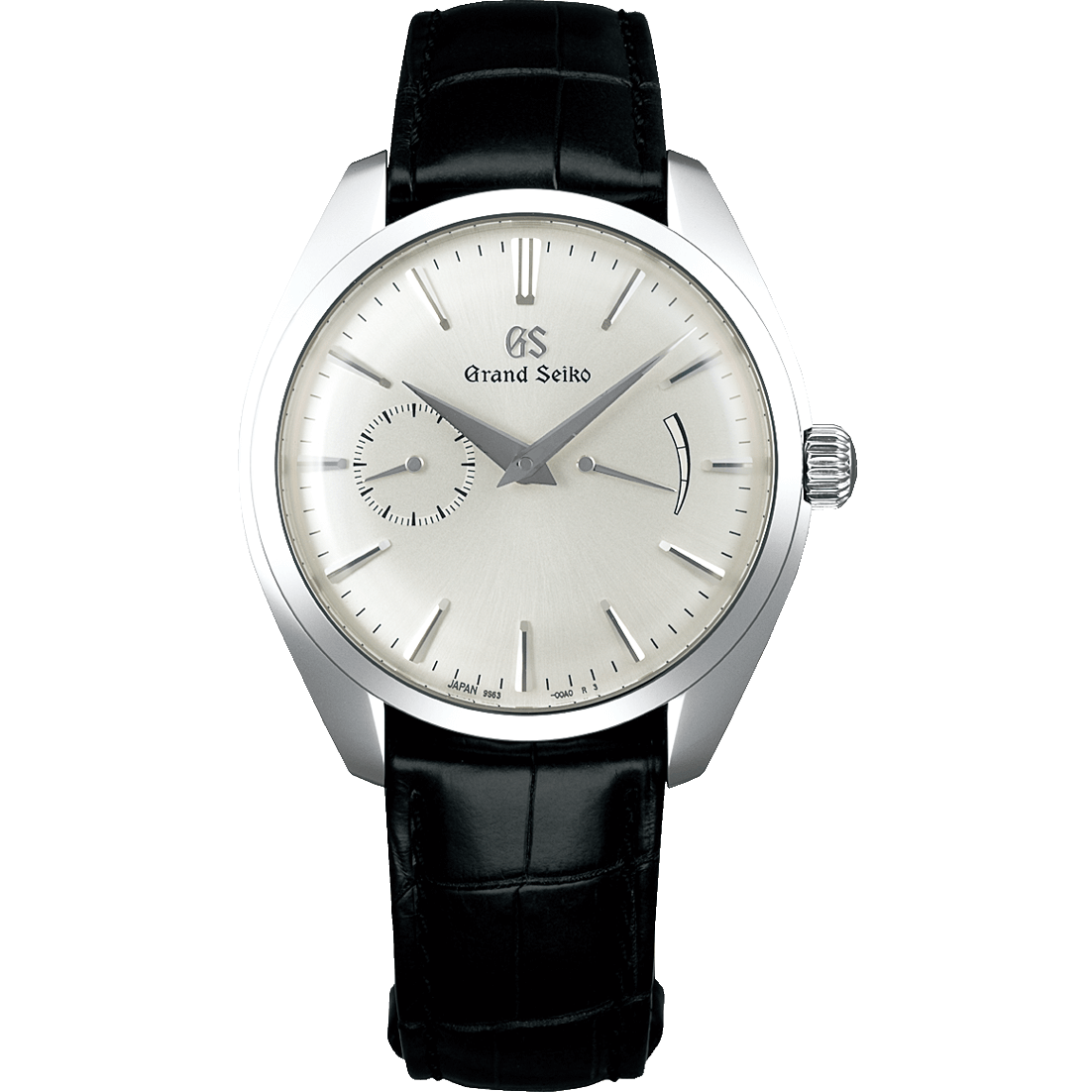 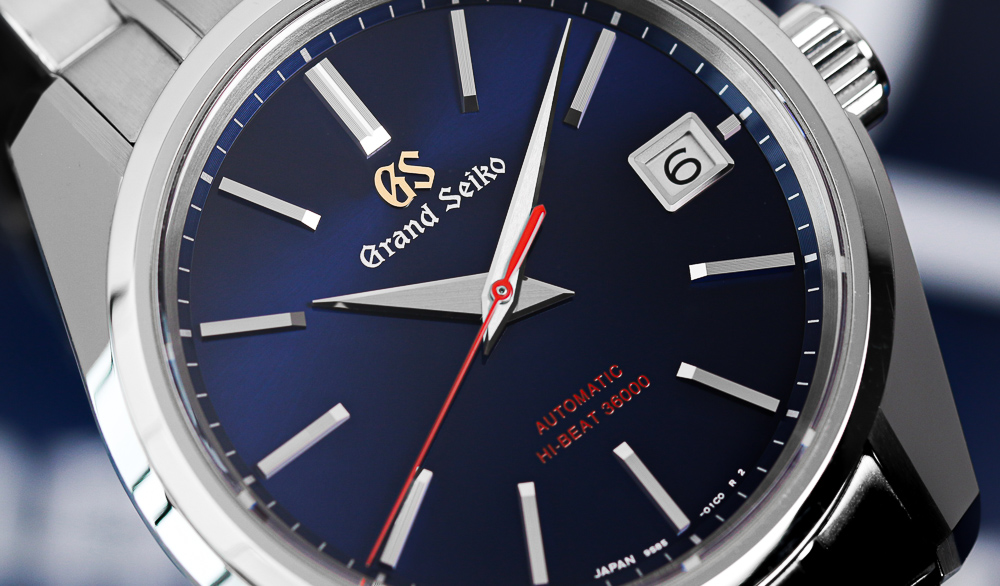 Celebrating Grand Seiko's Kanreki with the Limited Edition Ref. SBGH281
We take a closer look at another one of Grand Seiko's 2020 releases celebrating the brand's 60th anniversary.
Read Article 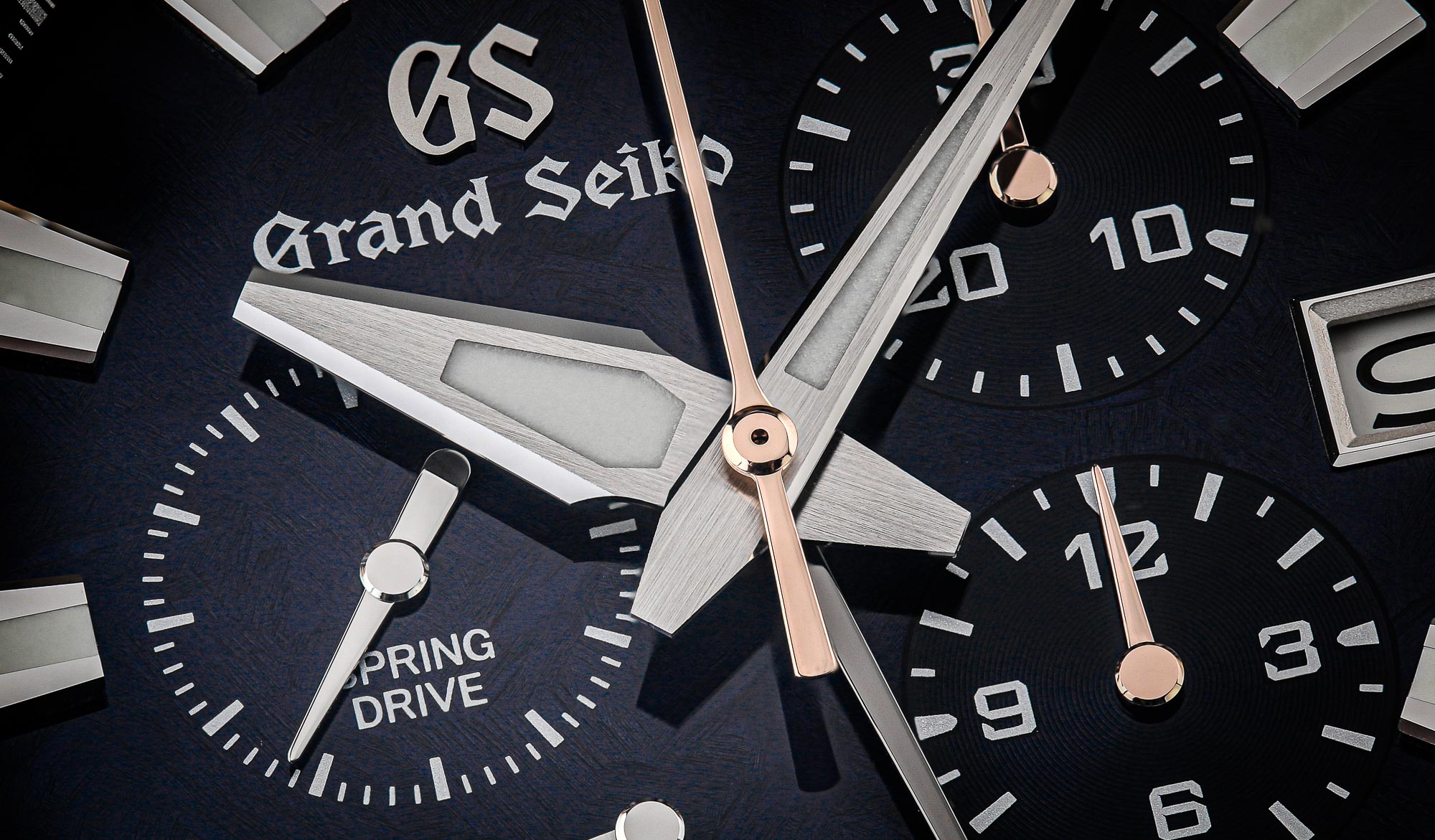 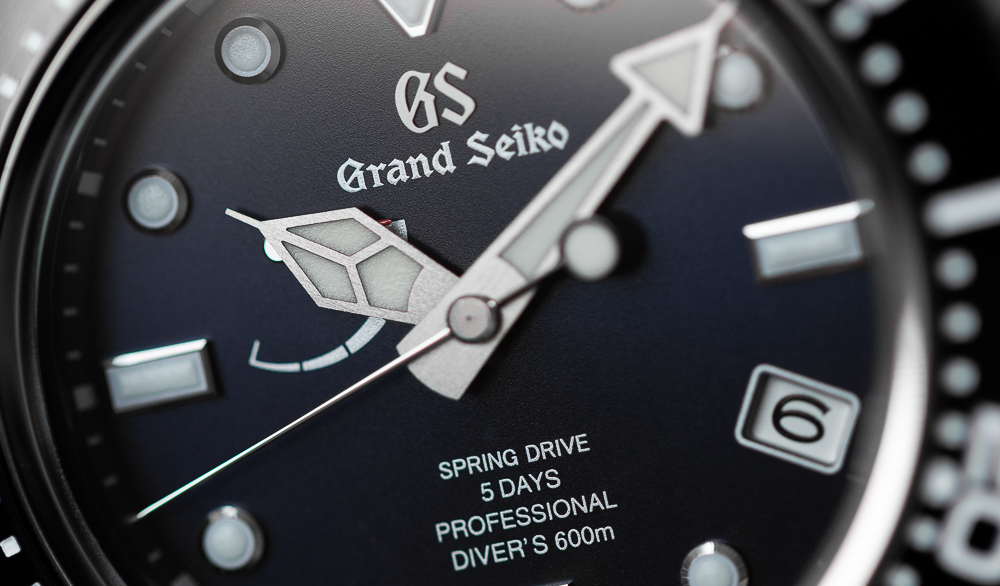 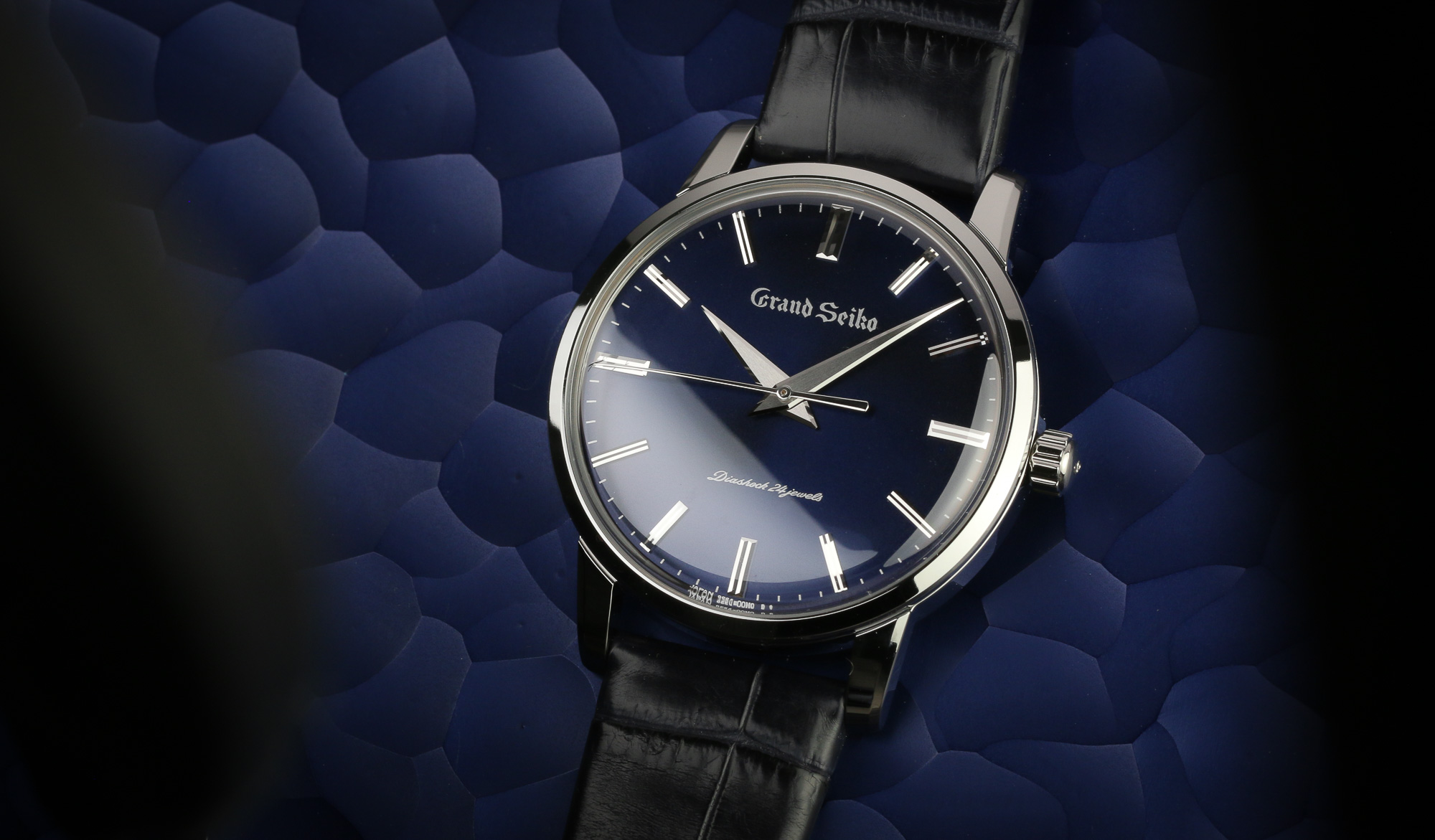