2020 marks the 60th Anniversary of Grand Seiko.  In Japanese culture, turning 60 is seen as the beginning of a new life. Similarly, this anniversary is a sort of re-birth for Grand Seiko. A new era has begun for the brand, and one of the biggest steps towards ushering in this new era was the development and release of the first Grand Seiko to incorporate the new 9SA5 caliber. A Hi-Beat running at 36000 bph with an 80-hour power reserve, 9SA5 has a completely new movement design, not limited to only the layout and aesthetics, but even the escapement, balance, and hairspring have evolved into their own unique forms unlike anything else in the industry. 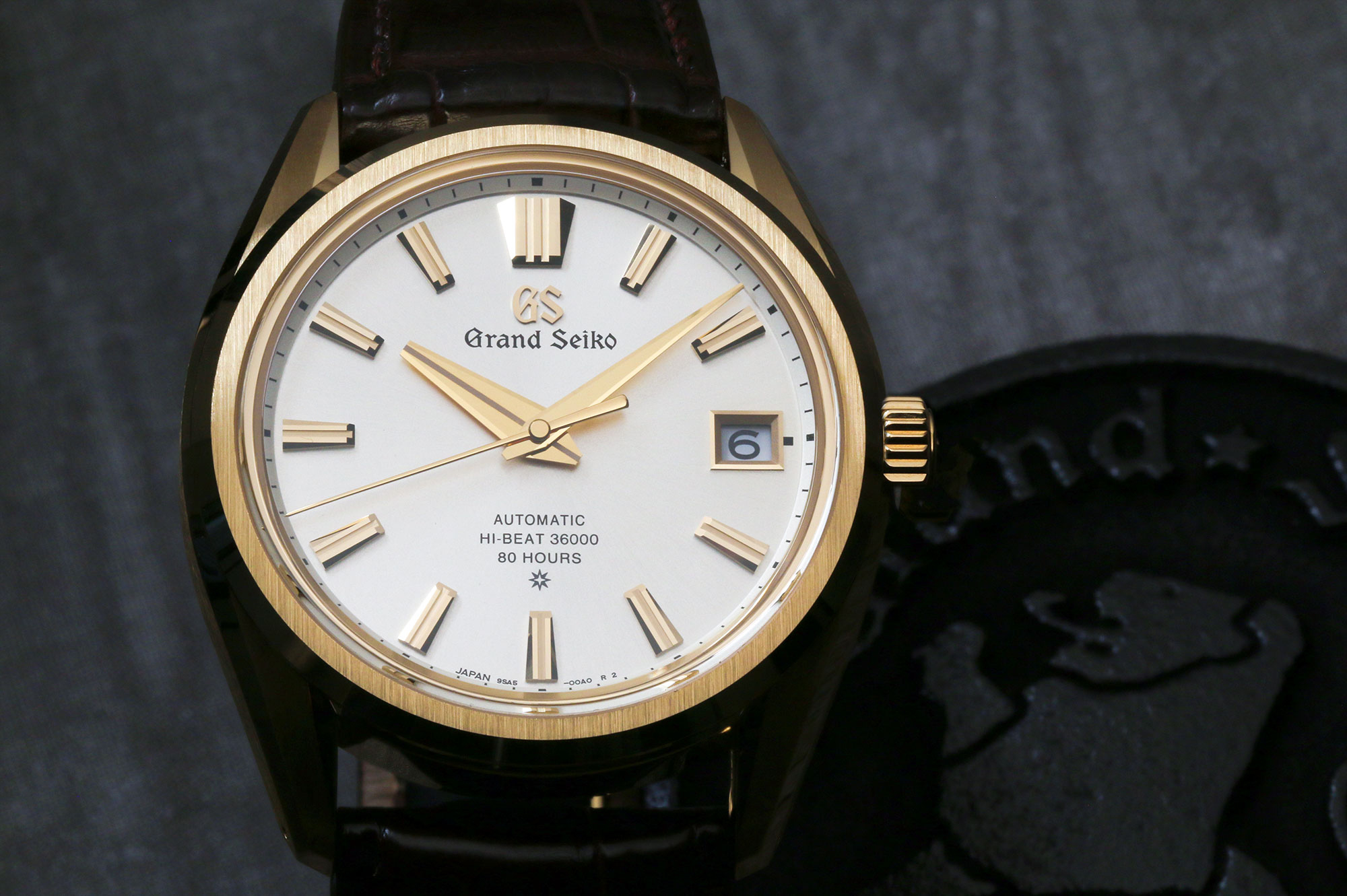 It would be inadequate to create a new and innovative caliber without considering its impact on the look and feel of the watch on the wrist. To that end, the launch of the 9SA5 was introduced in a completely new design for Grand Seiko while still retaining the elements that the brand is known for. The aim was to take the best elements of Grand Seiko design and improve on them in every way possible—to respect the past, but to also embrace the future. It is a Grand Seiko for the modern era. 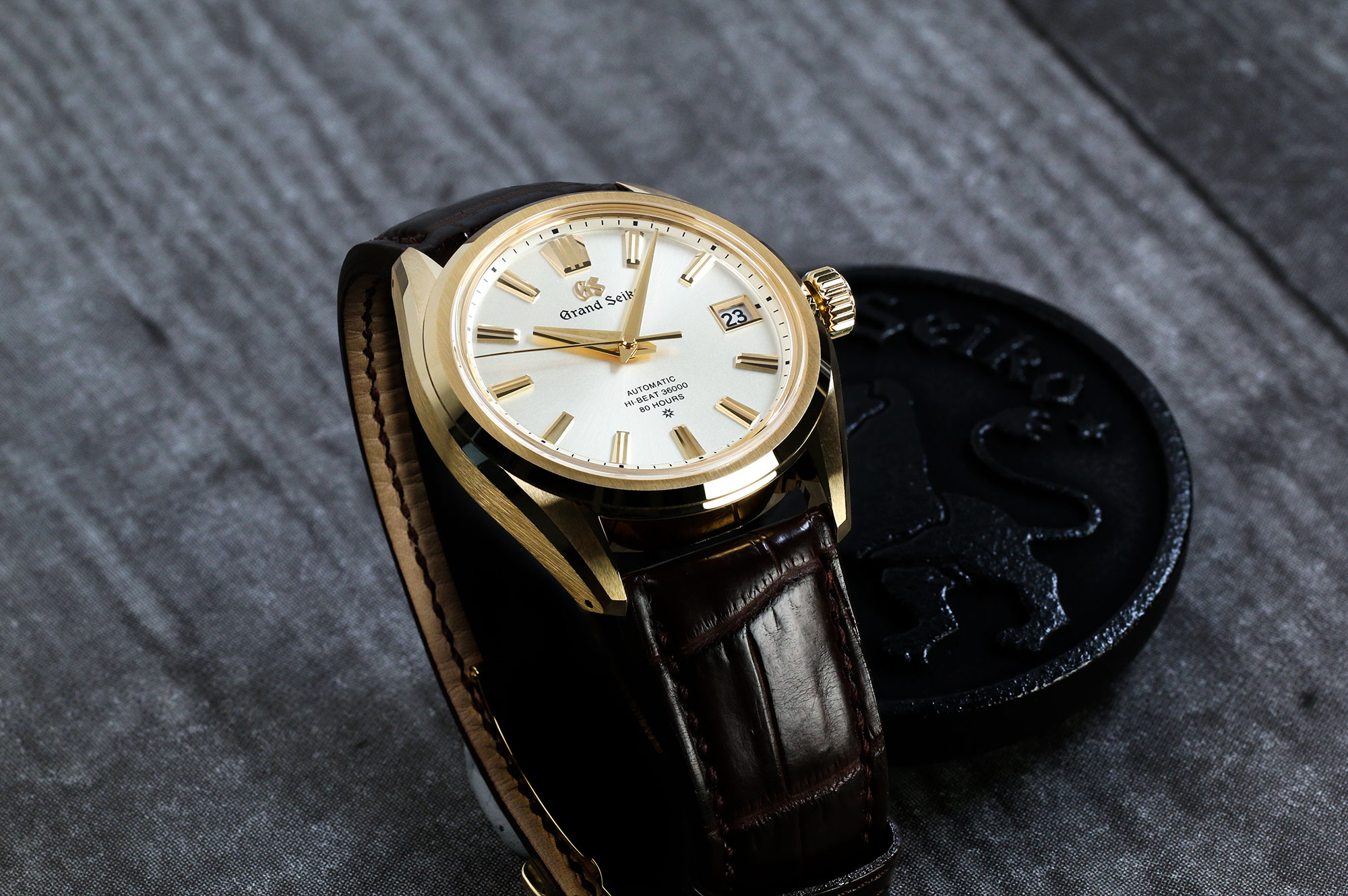 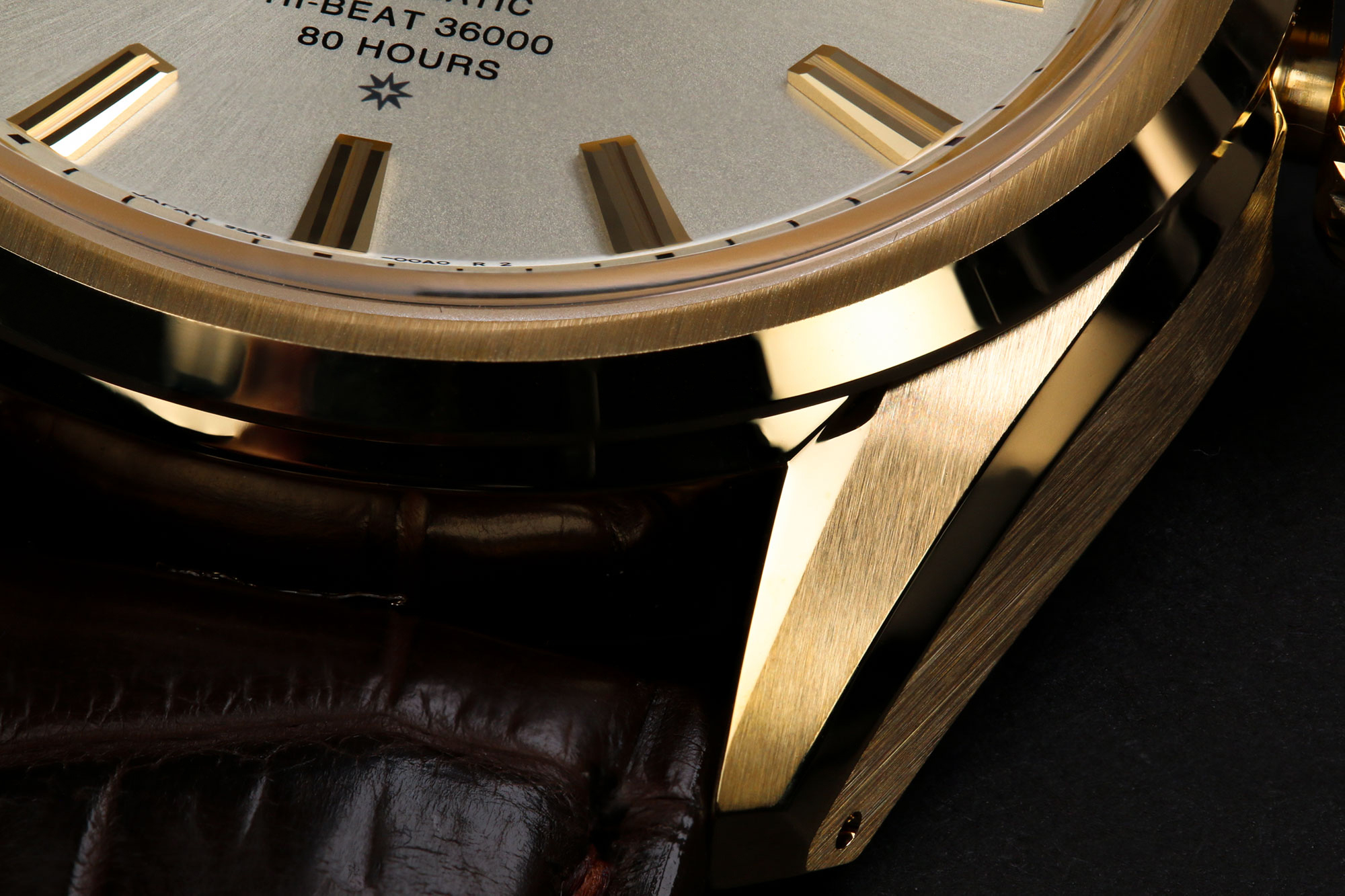 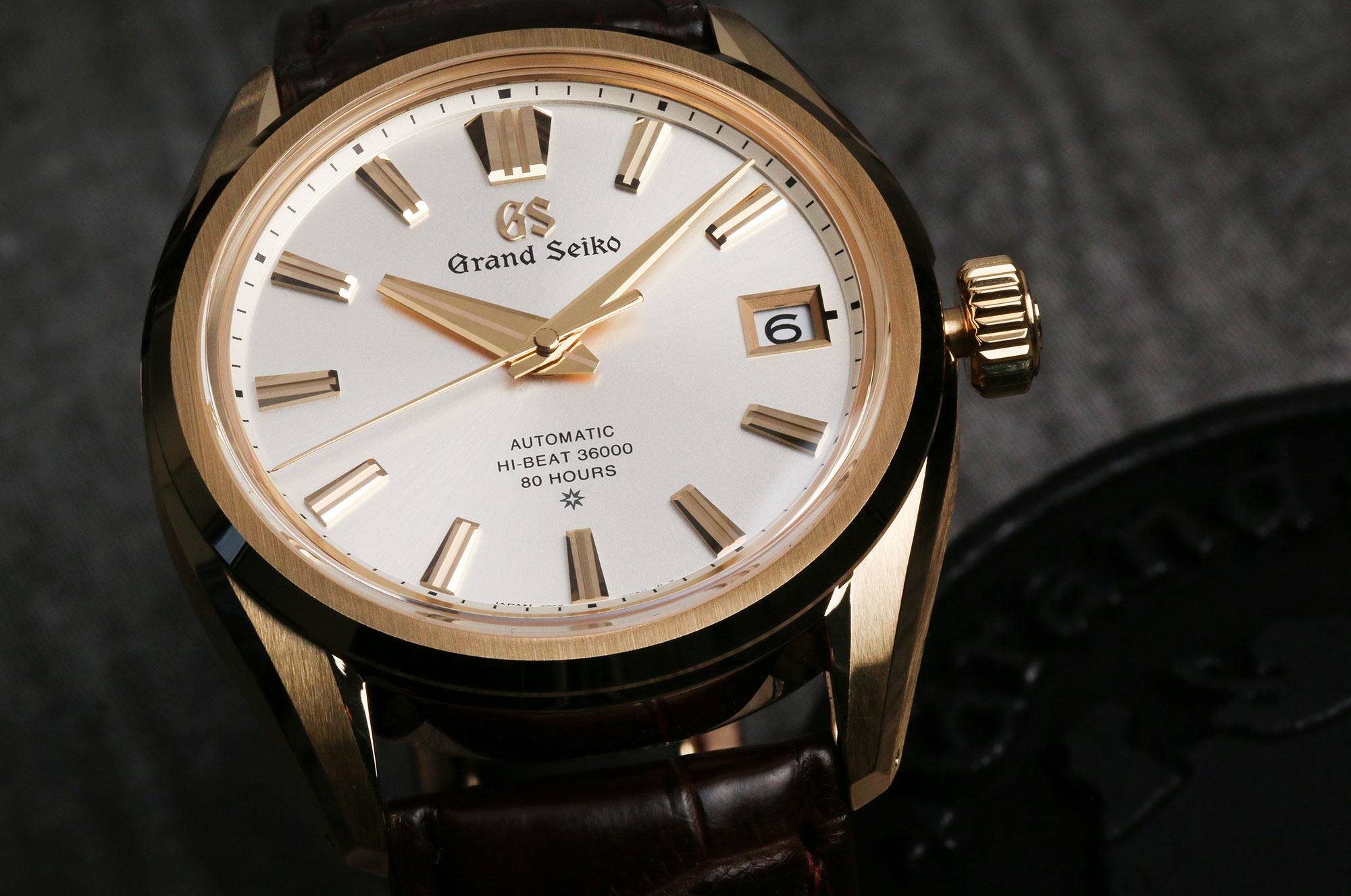 Most notably, the case design of the SLGH002 pulls inspiration from the 44GS. This includes the flat surfaces and sharp beveling of the case, rendered in 18k yellow gold and finished to have a totally distortion-free surface. It takes tremendous work and skill to attain such a high level of polishing on a complex design with multiple angular planes intersecting at sharp points, and it’s something that can only be executed, by hand, by the most skilled Zaratsu case polishers. It differs from the 44GS with the thinner, though still relatively broad, lugs on the 40mm case. The lugs hold a wide 22mm brown crocodile strap that gives the piece a feel unlike any Grand Seiko before it, stabilizing and securing this contemporary design on the wrist. 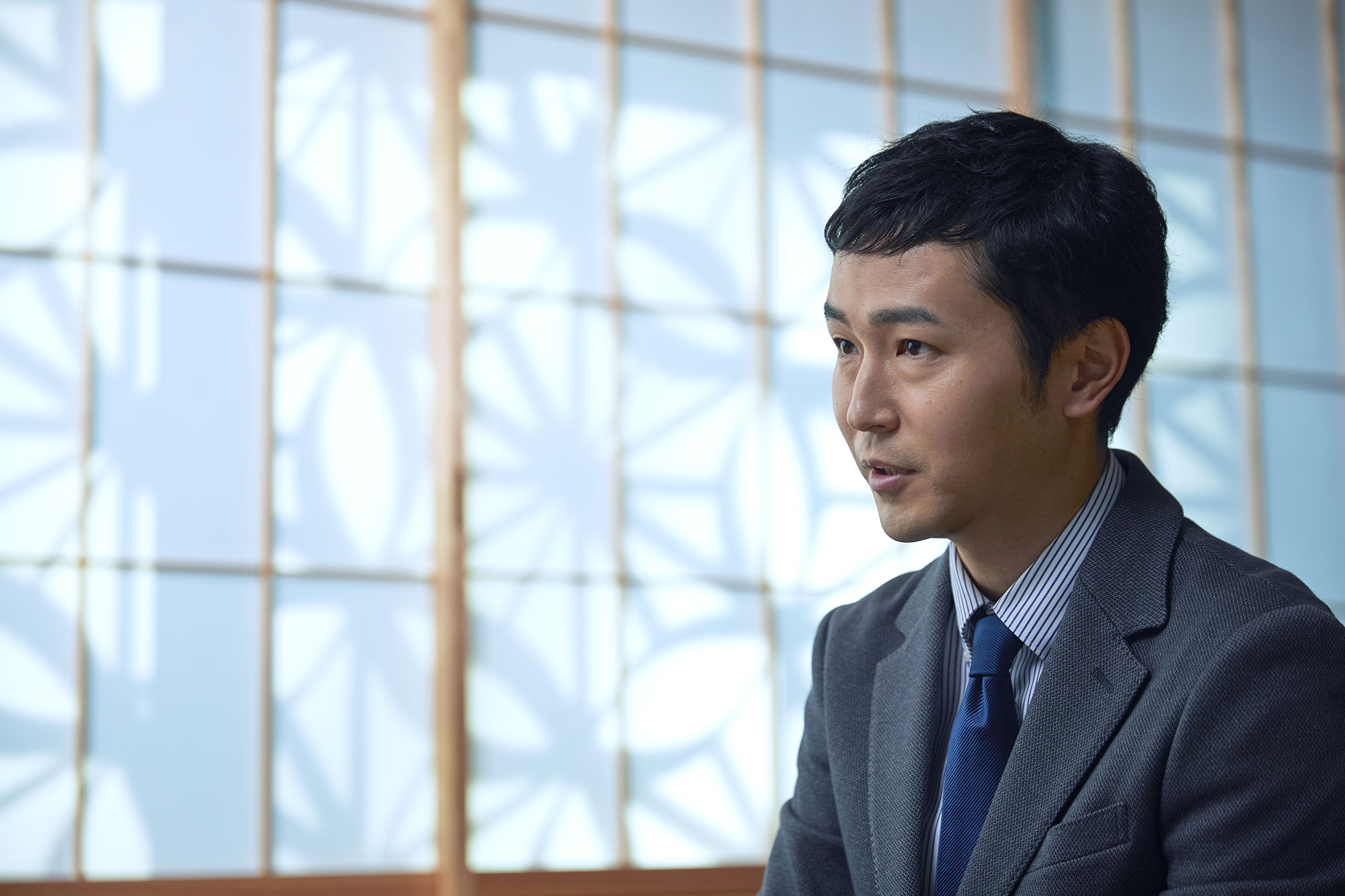 SLGH002 designer Kiyotaka Sakai, who was also involved in the development of the thin dress series and the Japanese Seasons Collections (exclusive to the US market), began his work for this design in 2017. He designed the watch for a more active lifestyle and wanted the case to feature more contrast. The contrasting hairline finish is very prominent, and when combined with the distortion-free, Zaratsu-polished mirror planes it’s incredibly impactful. Without question, the case is distinctly different from a 44GS, yet it retains some of its most defining elements.  As much as they wanted to respect the past, it was important to look ahead and establish a new look for the new era. The case design also incorporates a box-shaped sapphire crystal, which gives a slight vintage appeal but adds height, yet the case is still thinner than any other current Hi-Beat model. 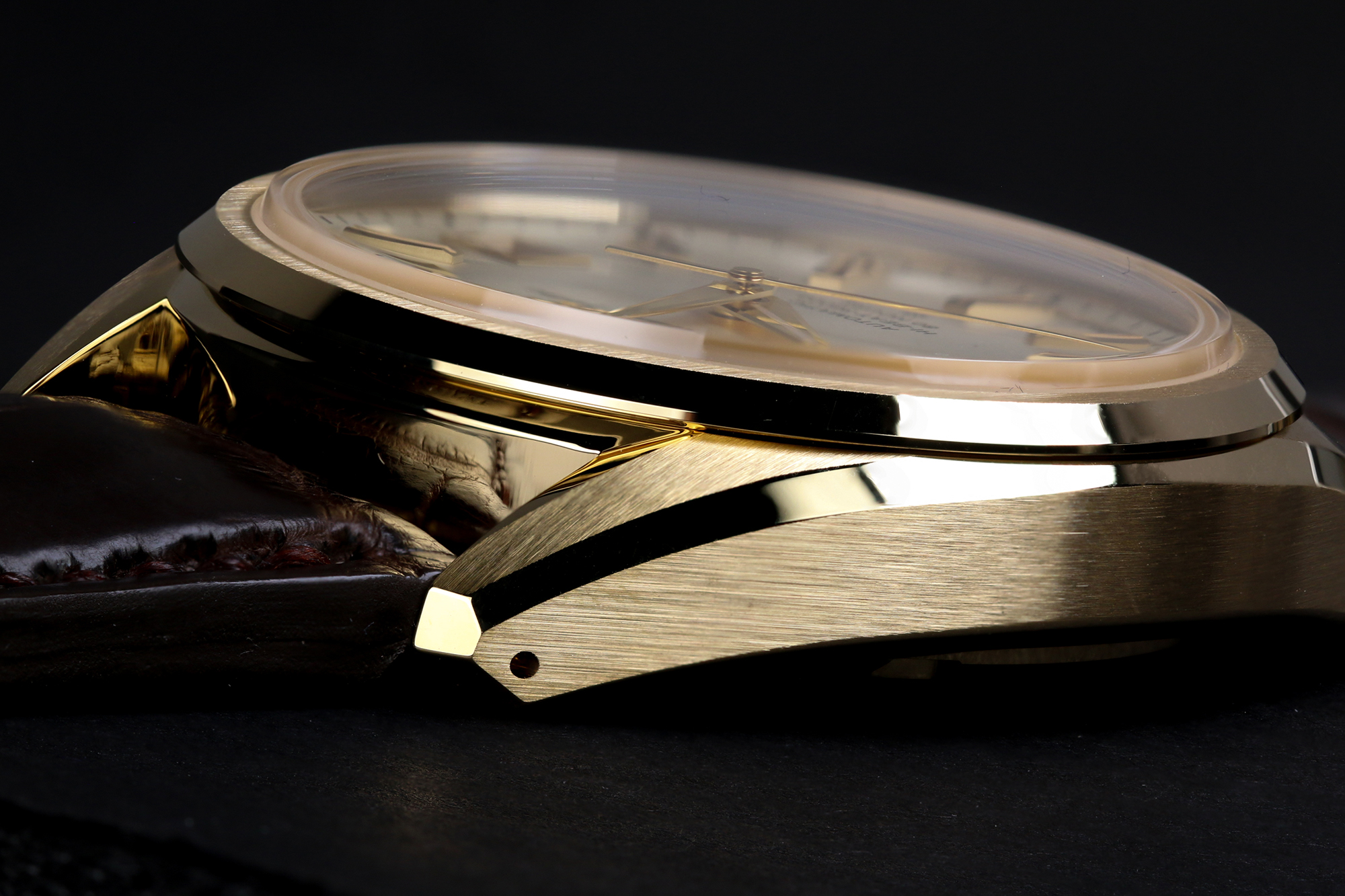 The bezel design for the SLGH002 is also a departure from anything in Grand Seiko’s line up. It incorporates more complex faceting, and the flat upper surface is hairline finished. This is a very rare detail, as most Grand Seiko bezels are mirror polished according to the Grand Seiko’s formative “Grammar of Design.” 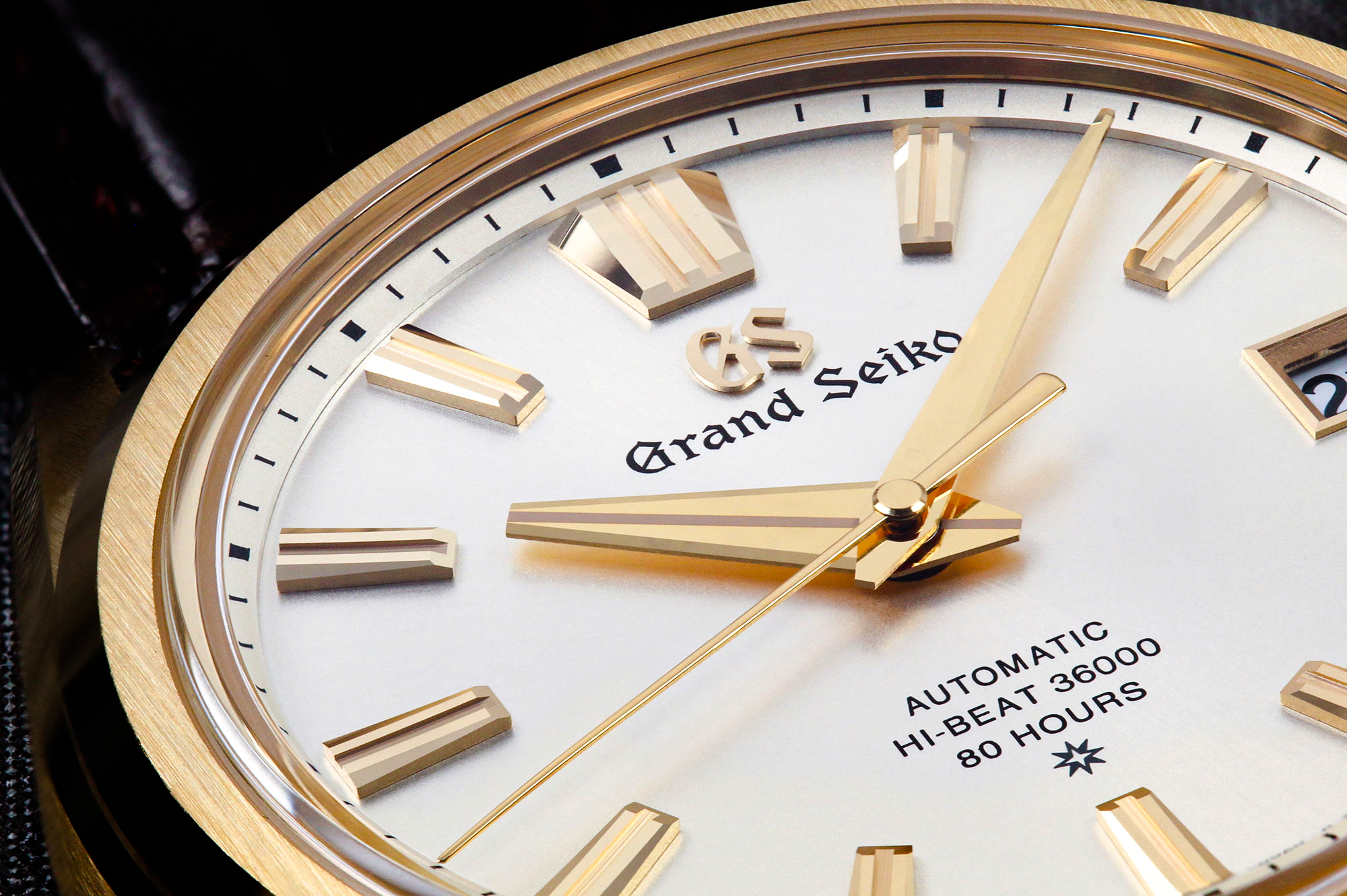 Sakai also reevaluated the dial. His inspiration for the new styling of the hands and indexes derive from the first Grand Seiko. With a broad hour hand and long slender minute hand, the first Grand Seiko set a distinct look emphasizing legibility. Large hands were incorporated as a part of Grand Seiko’s design philosophy, but the SLGH002 pushed for improvement. 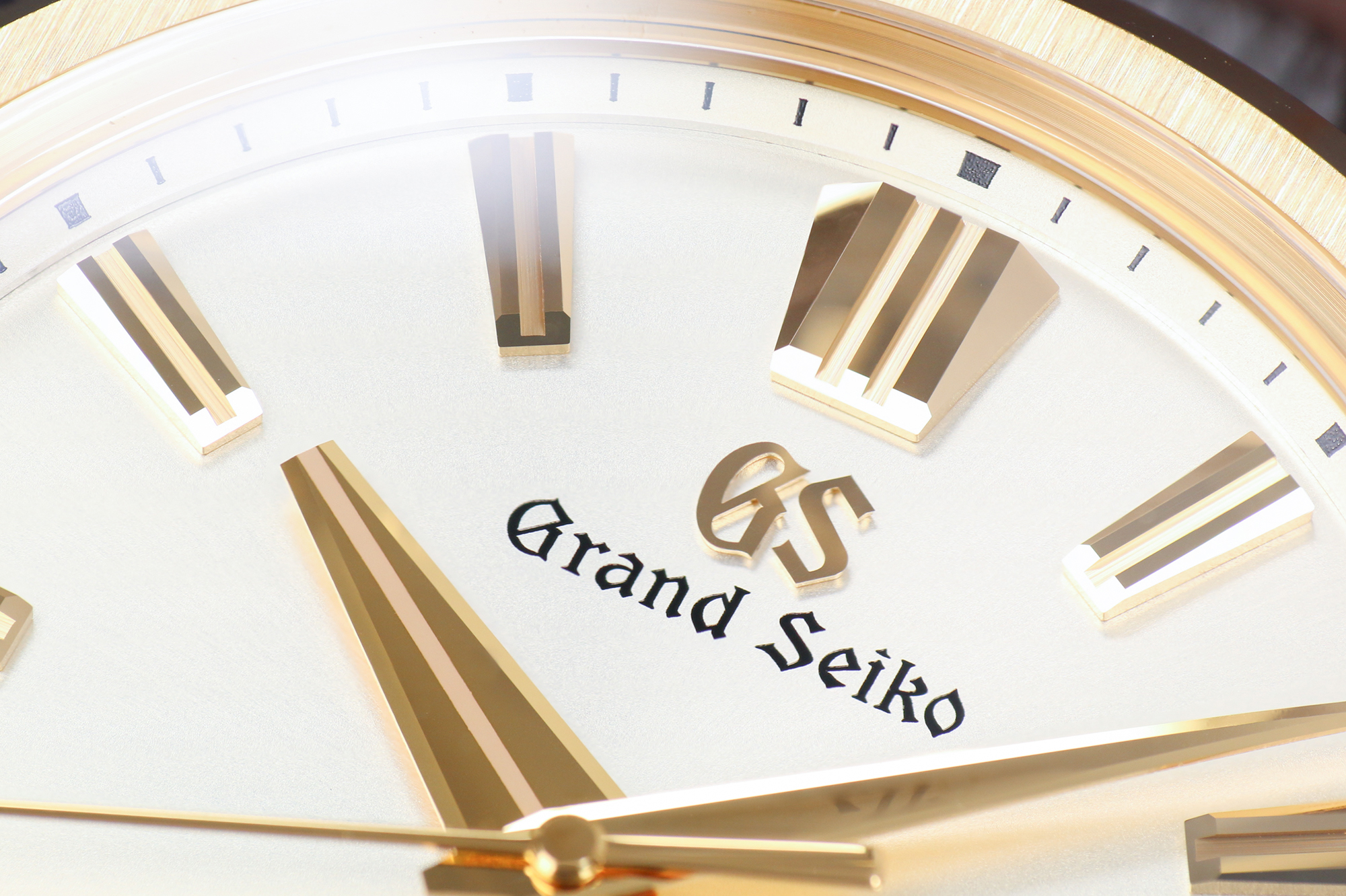 The 12 o’clock index is generally twice the size of the other indices, but this is 2.5 times the size of the others on the dial, making its position clear no matter what the angle. The hour hand is very broad and clearly aligns with the indices. The hands and indexes are multi-faceted and diamond-cut, and the hour hand has a flat tip that matches the exact width of the end of the index. There are also grooves running down the middle that improve legibility. The design of the indices have a new vibrance, complexity, and clarity to them. They are novel, but also undeniably Grand Seiko. 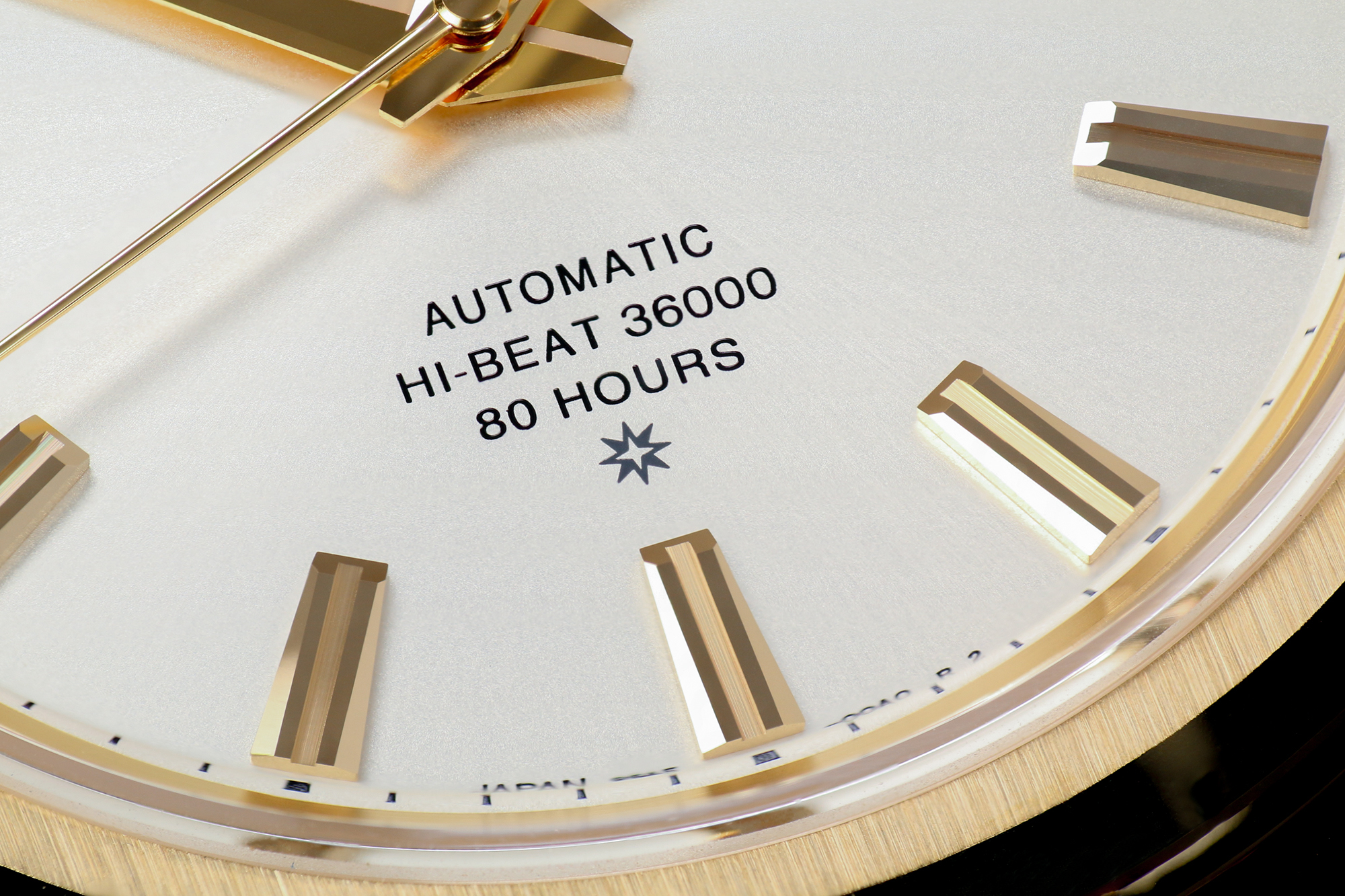 The SLGH002 has a star marking at 6 o’clock that is known as SD, or Special Dial. This eight-pointed star has been used by Grand Seiko since the first timpeice in 1960, and it signifies the use of solid gold indexes on the dial. In this instance, the indexes, the Grand Seiko logo, and the frame for the date window are in solid 18k yellow gold.

The date on the new 9SA5 allows for an instantaneous change, with the changeover occurring as fast as 0.015 seconds to 0.02 seconds. This advancement was brought to life through MEMS technology, which is used for the escapement components in most modern Grand Seiko calibers today. 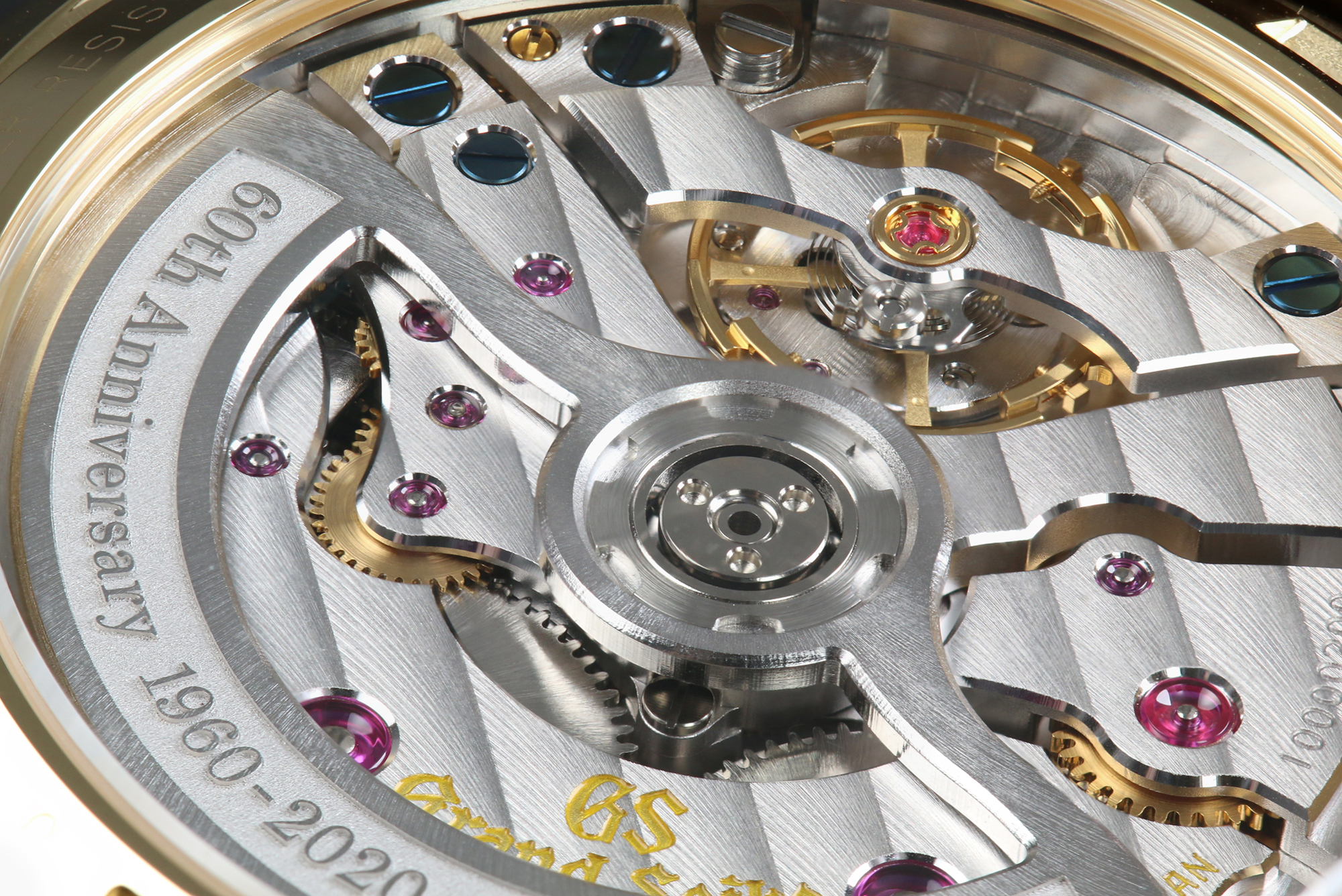 The 9SA5 caliber inside the SLGH002 has received great recognition this year (you can read  Jack Forster’s analysis HERE). This highly innovative movement focuses on improving efficiency in many different ways, while at the same time reducing thickness without sacrificing the long-term durability Grand Seiko requires for its calibers. Simply put, it accomplishes feats that do not often go hand-in-hand when it comes to watchmaking. Generally, you can expect a thinner movement to be less robust, yet 9SA5 retains its robustness. Similarly, high frequency calibers cannot support a long power reserve because they consume too much energy, yet the 9SA5 achieves an astounding 80 hours with a beat rate of 36,000 bph. These are just a couple of ways that 9SA5 defies expectations. 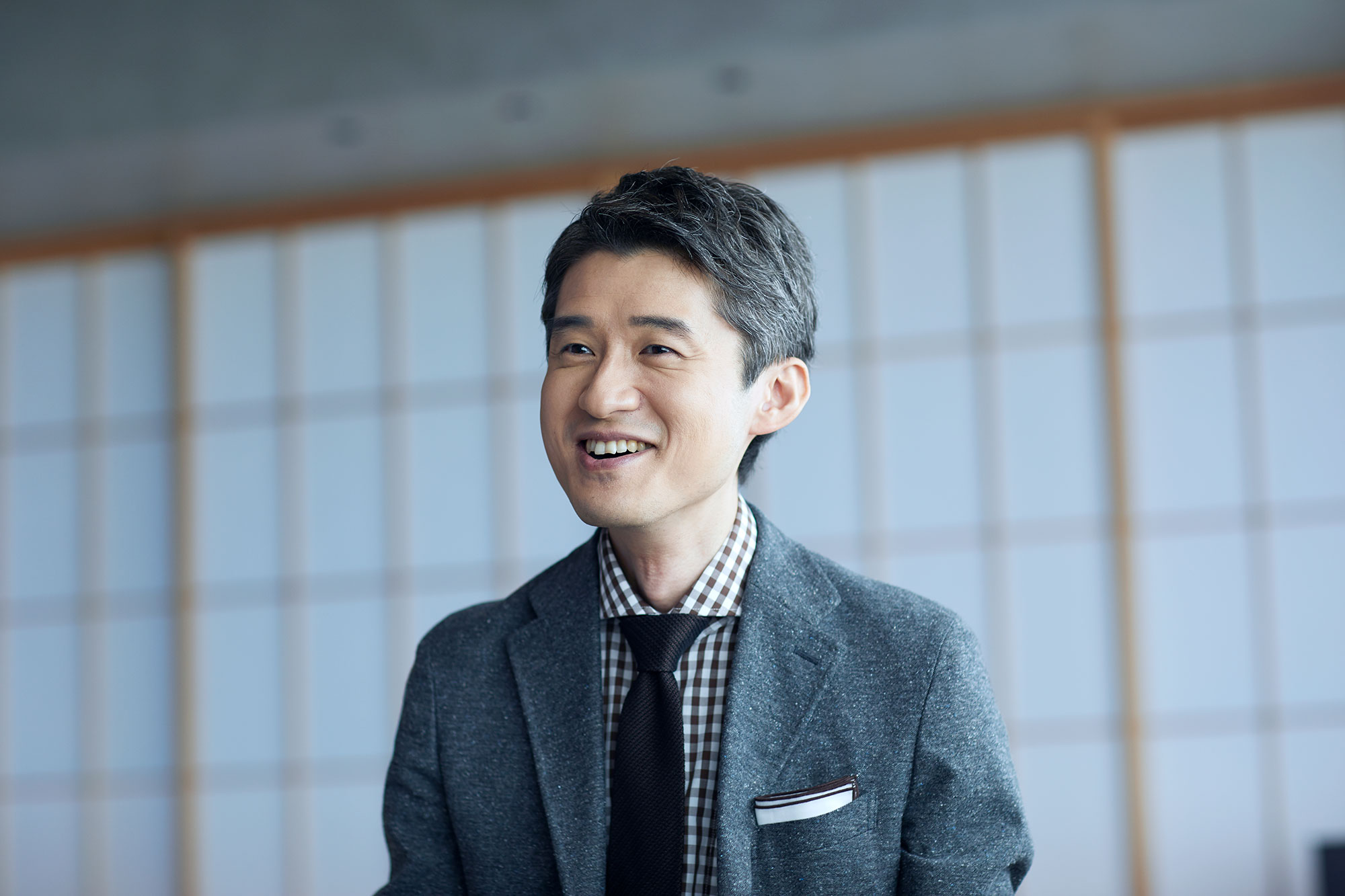 The development of caliber 9SA5 began in 2011. The better part of the last nine years was spent on bringing all of the pieces of the puzzle together, and the individual leading the charge was movement designer Hisashi Fujieda. 9SA5 was made possible through three brilliant innovations that make it one of the most innovative calibers from Grand Seiko to date: the Dual Impulse Escapement, the Grand Seiko Free-Sprung Balance, and the Horizontal Gear Train. 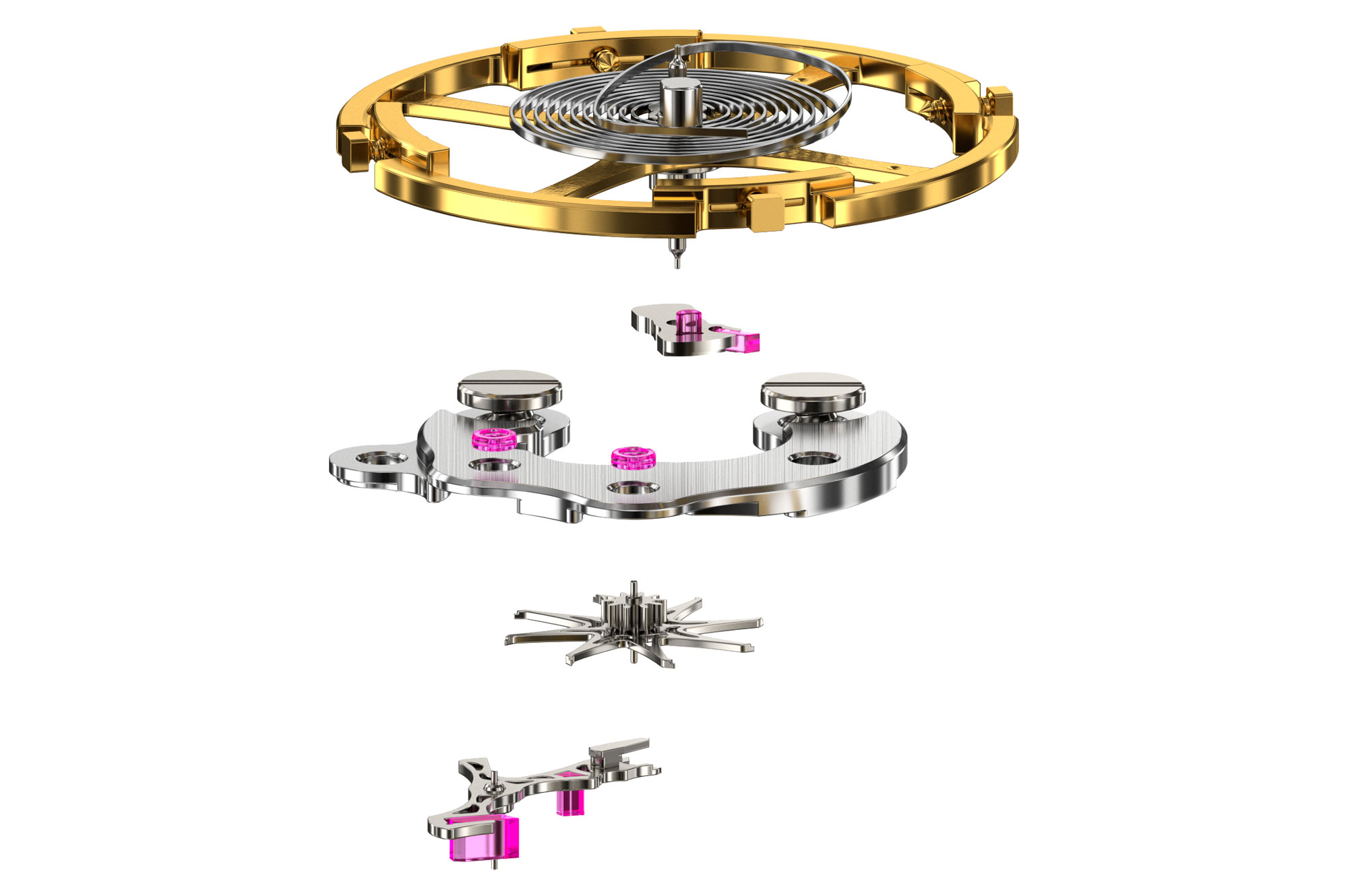 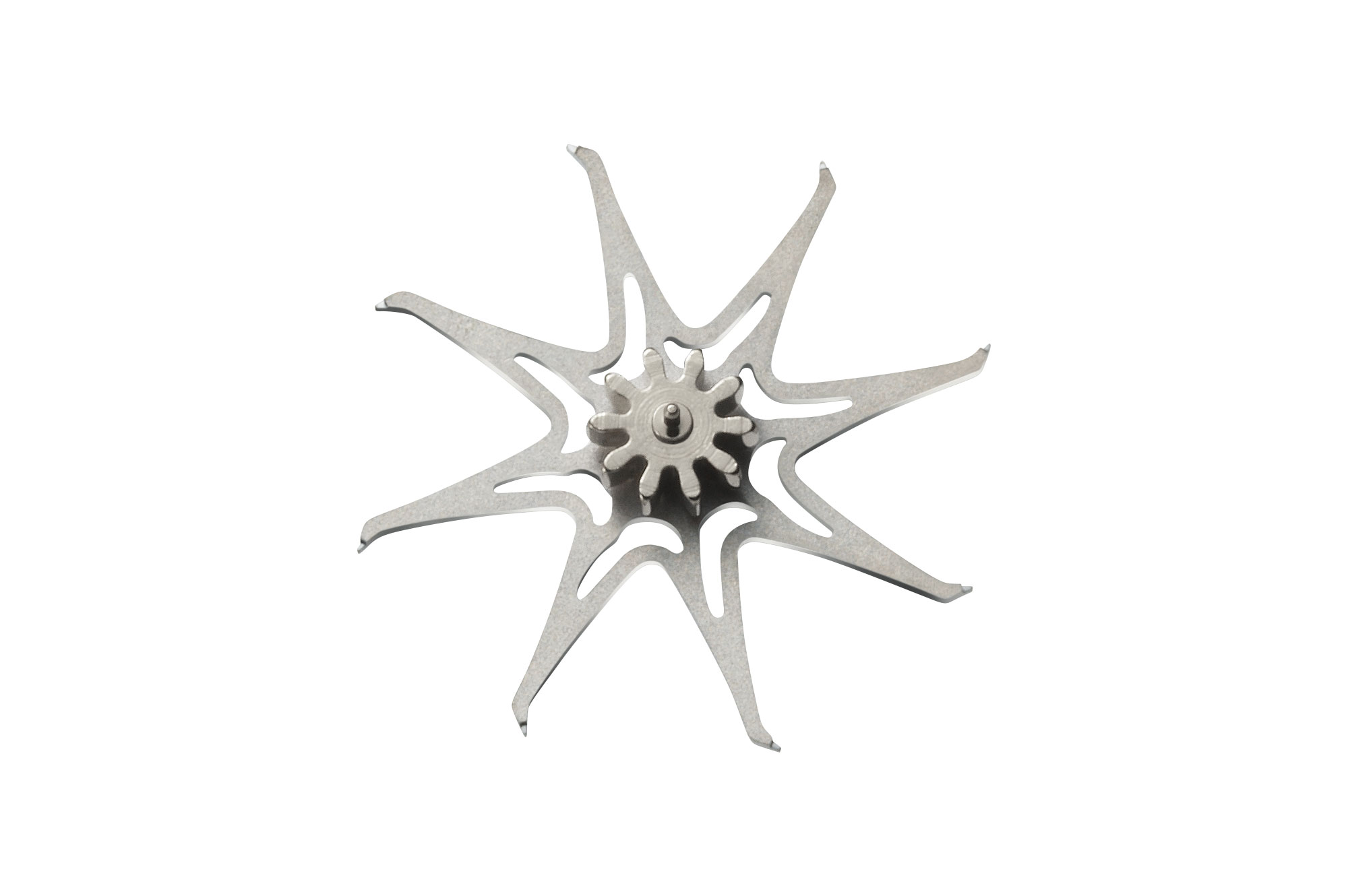 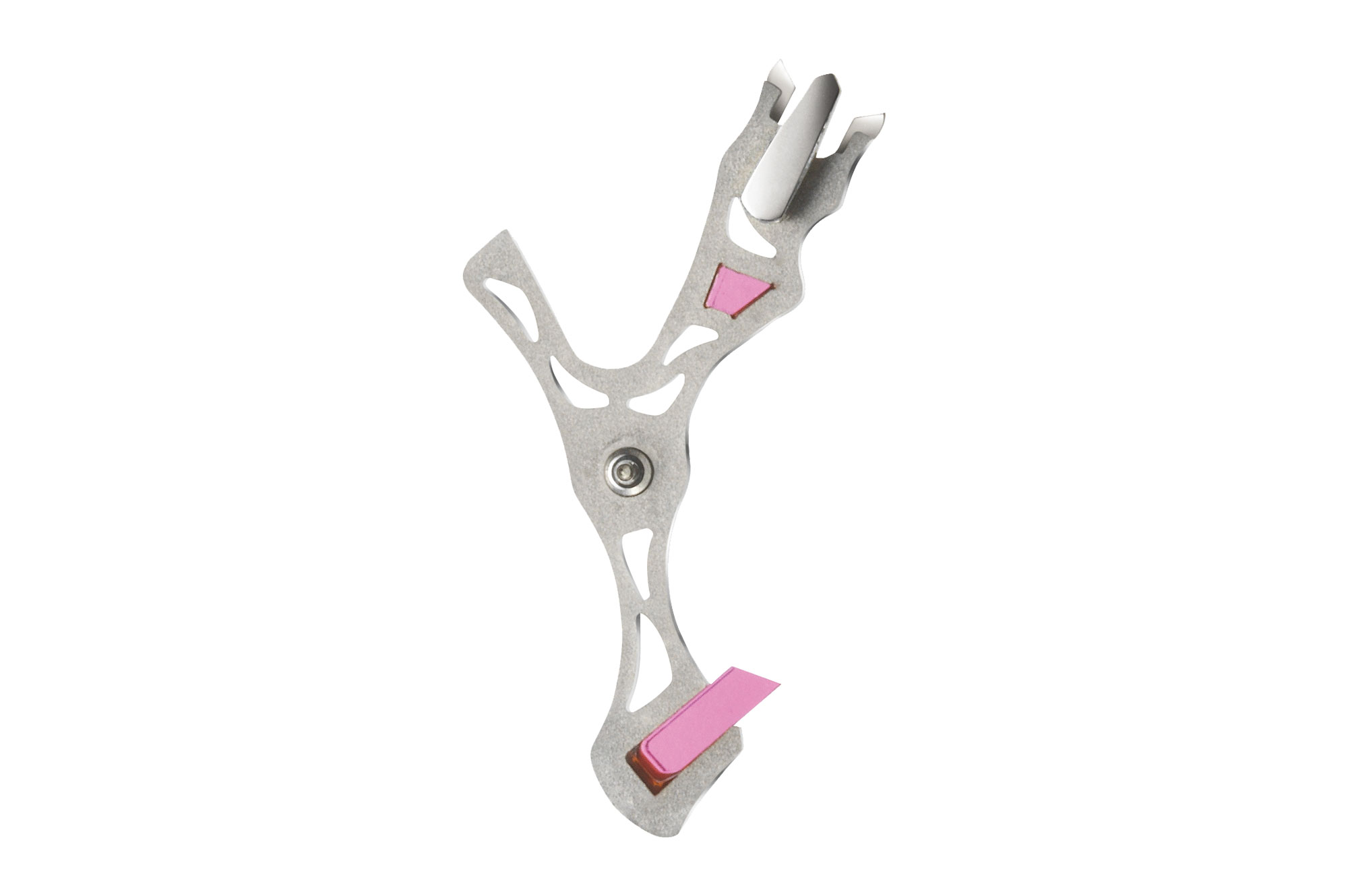 Like a lever escapement, the Dual Impulse Escapement creates an indirect impulse to the escape wheel delivered via the pallet fork and impulse pin. From there, the impulse is delivered to the balance in one direction. It also has some of the benefits of a lever escapement, such as its self-starting capability and security mechanism. In the other direction, the Dual Impulse Escapement operates on the direct delivery of energy, which is transferred by the escape wheel directly to a pallet jewel on the pallet roller, and in turn to the balance. This function is more comparable to a detent, or chronometer escapement, and is not something you’d generally find in use within the watch industry.

The Dual Impulse Escapement is manufactured by MEMS, which allows for 10 times the precision of conventional manufacturing methods and results in a unique design that is optimized for efficiency. The pallet fork and escape wheel are skeletonized, and the escape wheel has only eight teeth compared to the more common 15-20, resulting in a significant reduction of weight. This unconventional design also allows for lubricant retention steps on each tooth of the escape wheel, something first implemented in 2009 on the 9S85. 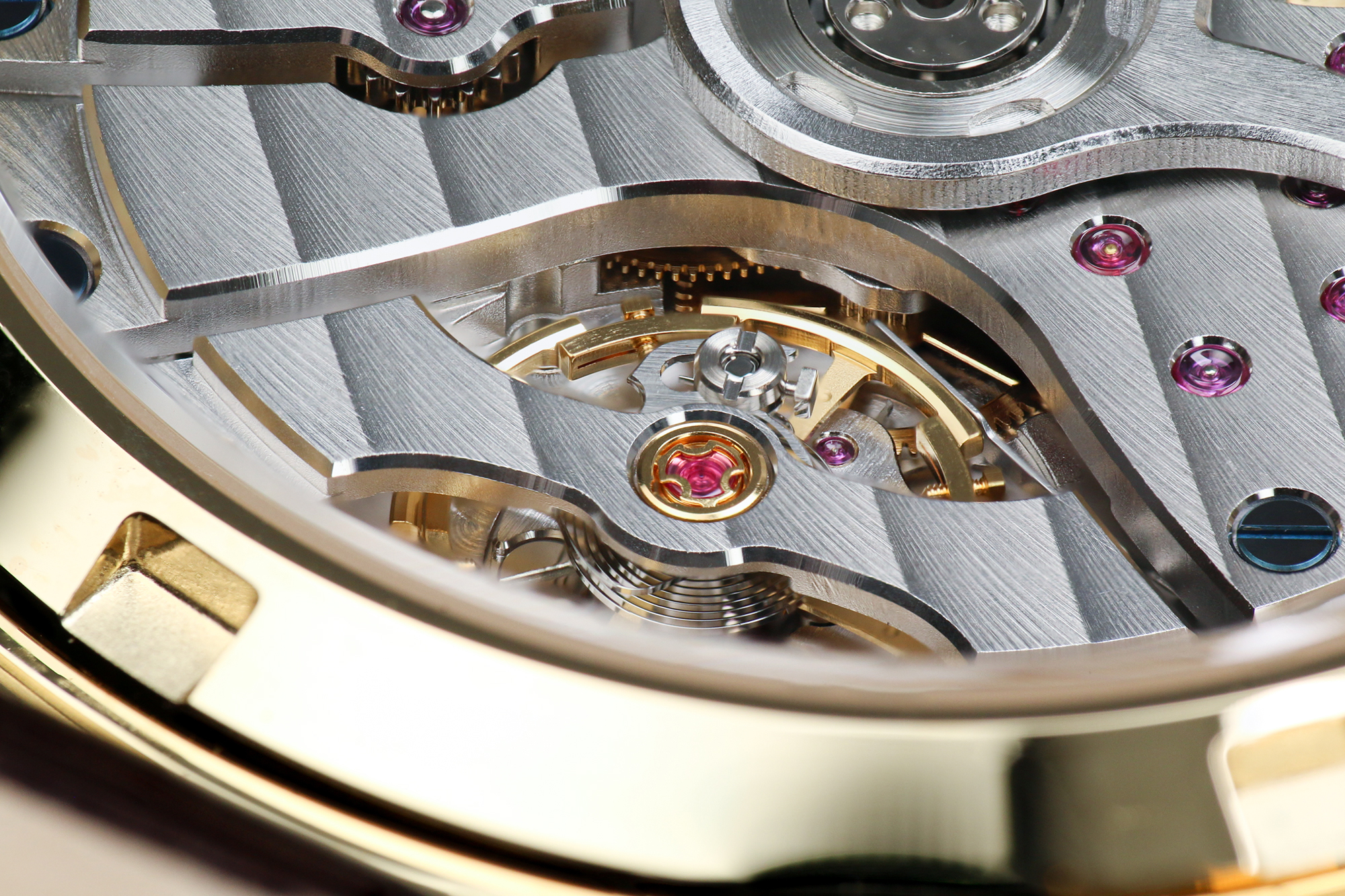 The Grand Seiko Free-Sprung Balance has no regulator to adjust the rate, the beat error, or the isochronism, which is possible with every Grand Seiko before the 9SA5. Here, the ends of the hairspring are fixed, and there is no regulator to adjust its active length. While this is helpful in improving long-term performance and durability since there is no regulating lever or pin in contact with the hairspring between its fixed ends, a free-sprung balance may be quite difficult to adjust outside of small micro-adjustments to the rate. Mr. Fujieda, however, developed a way to adjust isochronism in the 9SA5, a patented feature that has never before been implemented in any free-sprung balance. In this system, the hairspring’s outer terminal curve is attached to a rotatable stud that adjusts the isochronism. The hairspring itself was also redesigned for the 9SA5, and features Grand Seiko’s first overcoil, known simply as the Grand Seiko overcoil. This completely unique shape is patent pending, and much like other overcoils, it helps improve the performance in relation to changes in position. 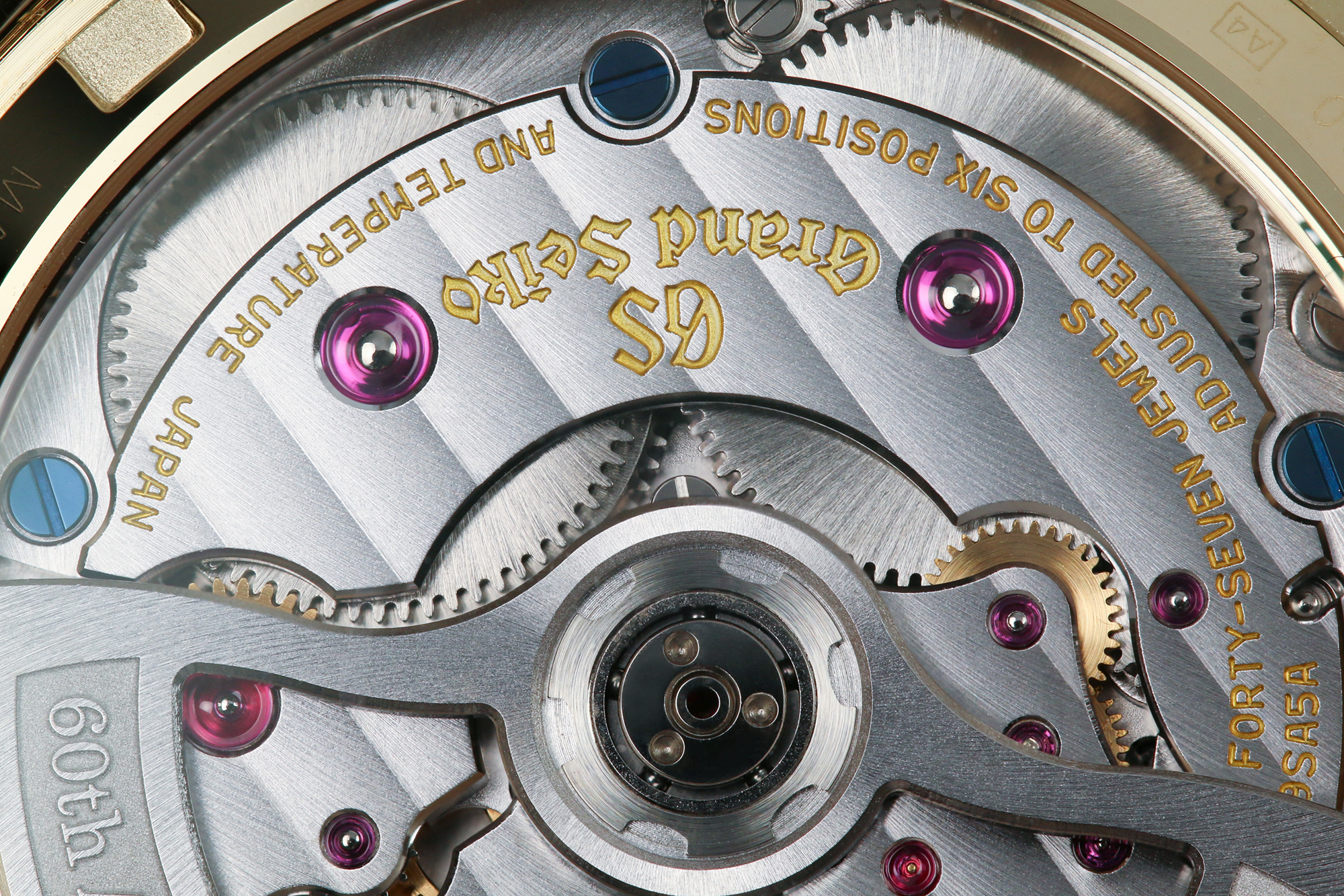 Lastly, there’s the Horizontal Gear Train. The 9SA5 is a notable 15% thinner than the 9S85, and its power reserve has increased by 45%, but despite this durability has not been compromised. This is thanks to the Horizontal Gear Train aligning the gears to fall in parallel with the new Twin Barrel design, which results in a reduction of thickness. The Twin Barrels of the 9SA5 use a longer and thinner mainspring, with both barrels winding and unwinding simultaneously. The first barrel feeds the energy to the second barrel, which then passes that energy to the center wheel before continuing to the rest of the gear train. 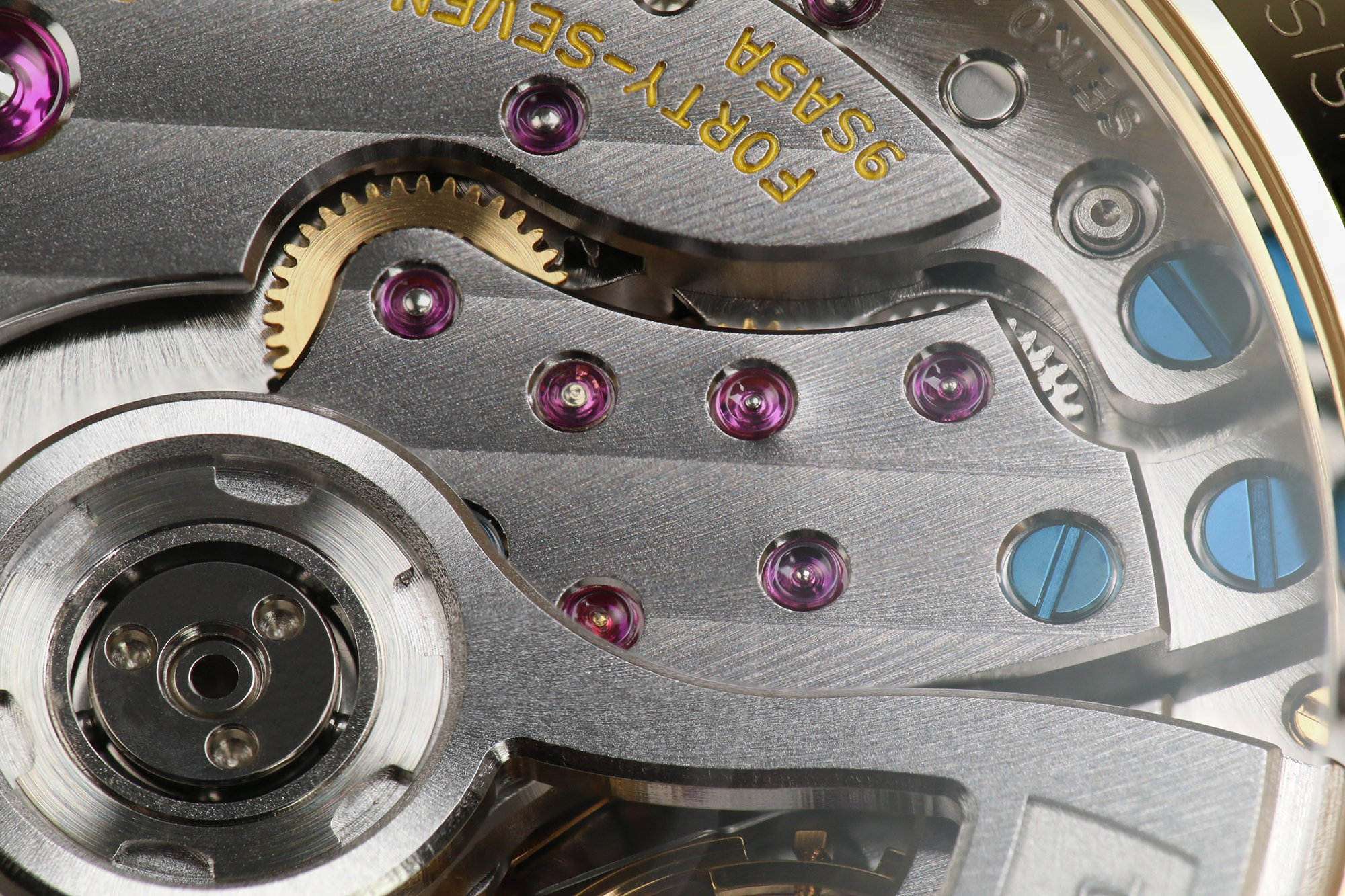 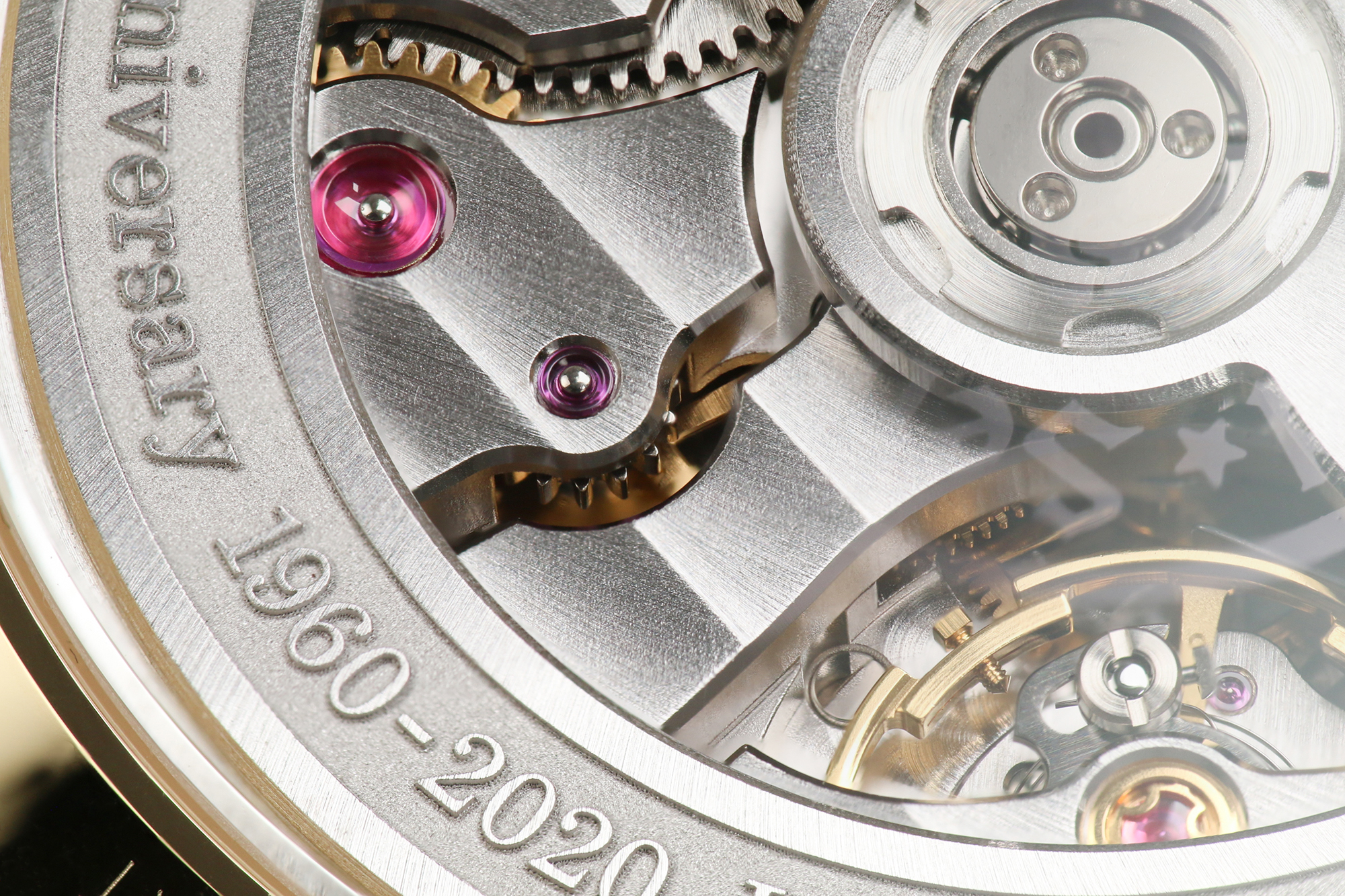 The aesthetics of the 9SA5 feature notable changes from the rest of the 9S series, implementing a new striping pattern known internally at Grand Seiko as Shizukuishi River Stripes. The design was meant to have a more matte finish in comparison to the Line Gradation Stripes of the rest of the 9S series, which are deeply cut and polished to create a more brilliant effect. This new method of finishing for the stripes plays with the highly polished beveled edges surrounding each bridge in the caliber. You will notice that on the central rotor bridge is a peak intended to represent Mt. Iwate, and there’s also a curved outline representing the bend in the Shizukuishi River. Both Mt. Iwate and the Shizukuishi River are near the Grand Seiko Studio Shizukuishi in Northern Japan. 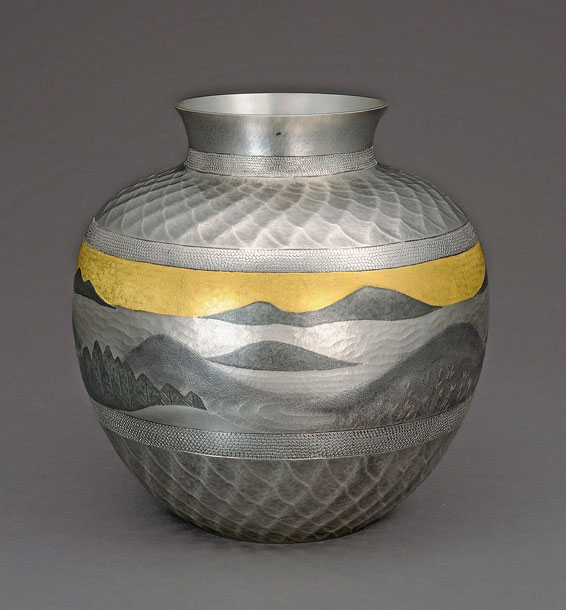 Around 2010, Mr. Fujieda visited an art museum that, while unknown to him at the time, would influence his design of the 9SA5, which he would begin to develop a year later. He encountered a piece of art called “Wave of Clouds” by Osumi Yukie (image credit galleryjapan.com), whose skill in smithing has led to her appreciation as a Living National Treasure, a popular term in Japan for individuals certified as Preservers of Important Intangible Cultural Properties. Her metal work involves hammering, a traditional artform known as tankin in Japanese. Fujieda admired the sense of tradition that was apparent in her work, but also its modern elements. This inspired Fujieda to fuse both modern and traditional elements in the design of the 9SA5.

Mr. Fujieda’s dream of creating the ultimate Grand Seiko mechanical caliber has come to life in the 9SA5 and its first completed watch, the SLGH002. This Limited Edition of only 100 pieces is available exclusively at Grand Seiko Boutiques worldwide. It is available in the USA for $42,000.