Studio Shizukuishi, where all Grand Seiko mechanical watches are made, is surrounded by woodland areas boasting nearly 1,000 wild-grown trees.  These forested areas are maintained and preserved by the people of Shizukuishi, with the manufacturer itself also taking part in the region’s sustainability, nature, and the local community. It is only fitting then that nature continues to influence the designs of Grand Seiko’s creations, as we have seen in the past with dials inspired by Mt. Iwate on models SBGJ201 or SBGJ203, among others.

In 2020, Grand Seiko Studio Shizukuishi introduced their best mechanical movement yet — the groundbreaking Hi-Beat 36000 80 Hours caliber 9SA5.  So far, this movement has only been utilized in limited edition models SLGH002 in 18k yellow gold and SLGH003 in stainless steel, both celebrating the 60th anniversary of Grand Seiko. 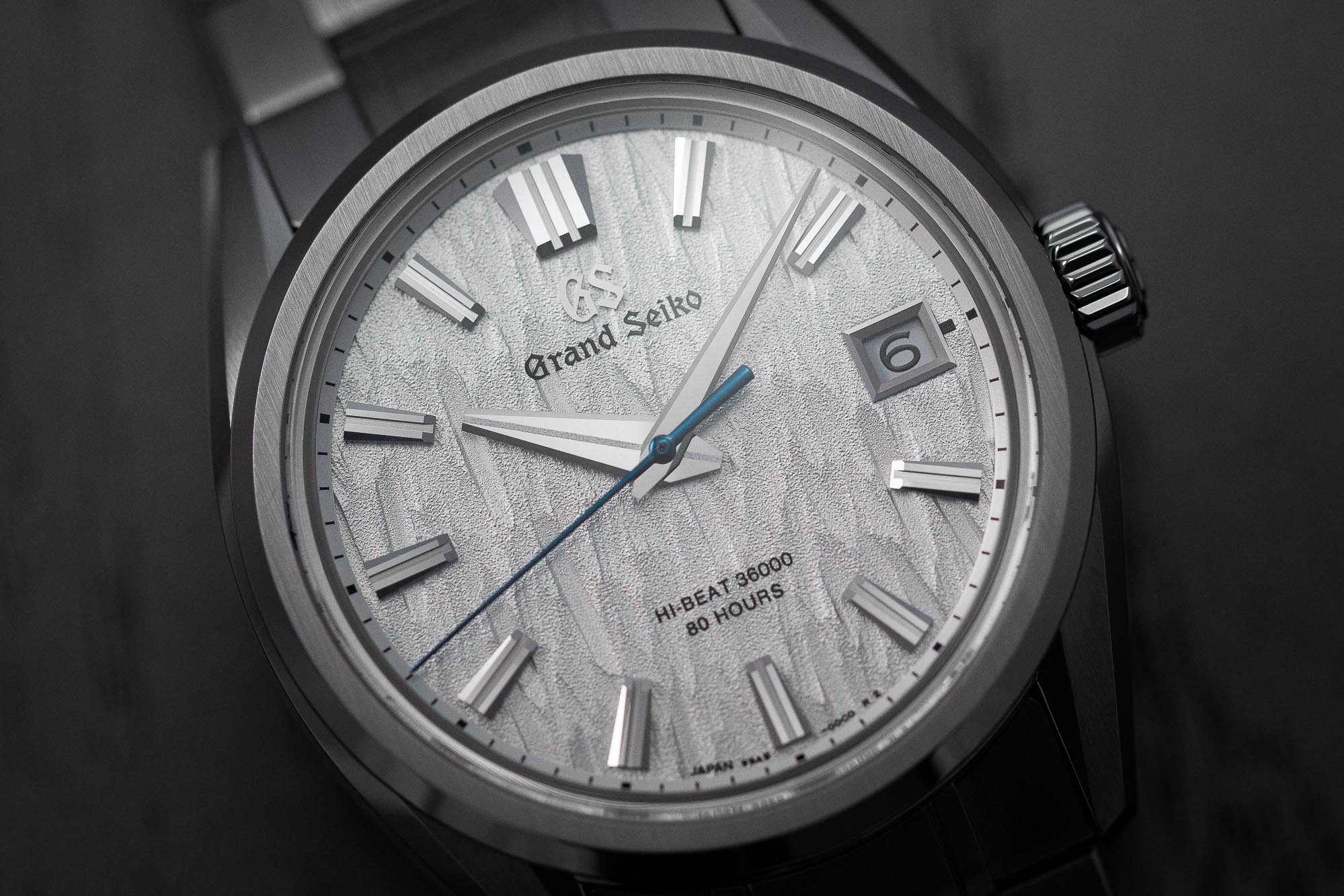 The beautiful Shirakaba forests of Shizukuishi

The admiration for nature and respect for living alongside it in harmony is a part of Japanese culture.  Japan’s forests account for nearly 70% of the nation’s land area, which is truly an incredible number to consider.  In Shizukuishi, the white birch forest, also known as shirakaba, is a beautiful and significant preservation site, one where Grand Seiko craftsmen and women pay special care, respect, and attention to. Over the years, drawing design inspiration from nature itself has become a defining trait for Grand Seiko. 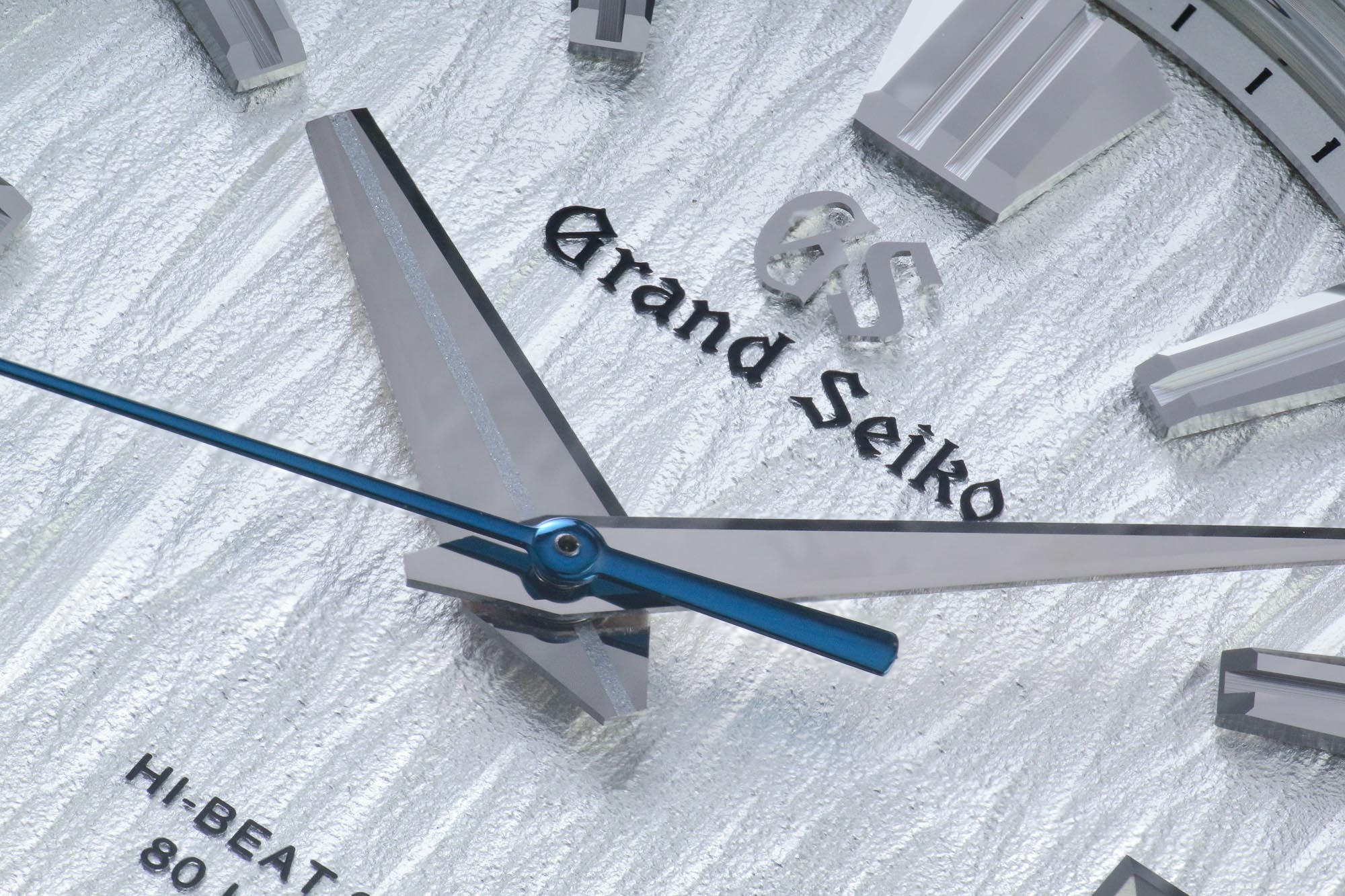 The distinct white birch texture on the dial of SLGH005.

The dial of SLGH005 is press patterned to a distinct and prominent look, featuring a jagged linear and granular texture that is expressive of the many white birch trees surrounding the birthplace of Grand Seiko’s mechanical timepieces.  The white of the bark is represented by the silvery-white color of the dial, which, depending on the light, can look matte white or metallic silver.  This texture also appears more prominent due to the fact that the dial of this model is actually closer to the sapphire crystal than the other models in the lineup.

When this new Grand Seiko design launched in limited edition models SLGH002 and SLGH003, it was simply a part of the Heritage Collection. Now, this design style has been given a distinct series name within that collection — Series 9.

The Series 9 name echoes the number 9, which is used in the naming of all modern Grand Seiko calibers.  The number 9 in Japanese is pronounced kyu, which is represented by the kanji symbol 九.  Another kanji symbol 究極 — also pronounced kyu — translates to “the ultimate.”  This representation of the ultimate, along with 9 being the highest possible single digit number, signifies Grand Seiko calibers and this new series as being the ultimate in precision, legibility, durability, and beauty.  These are the ideals behind Grand Seiko’s watchmaking philosophy.

Pulling from the past while still paving a path for a new road ahead, the Series 9 design represents a new flagship for Grand Seiko. One of the influences for this design comes from the first Grand Seiko timepiece from 1960, which featured a short, but broad, hour hand and a long, slender minute hand to easily distinguish between the two. The hands here are diamond cut and faceted at a distinct angle to capture the light (which improves visibility in low light settings), while the granulated strip running down the center of the hour hand provides contrast to the mirror finishing covering the rest of the hands.  The tip of the hour hand matches the width of the indexes at their tapered end, and the indexes are highly faceted and meticulously crafted to provide contrasting shadows and glimmers of light to enhance their visibility. 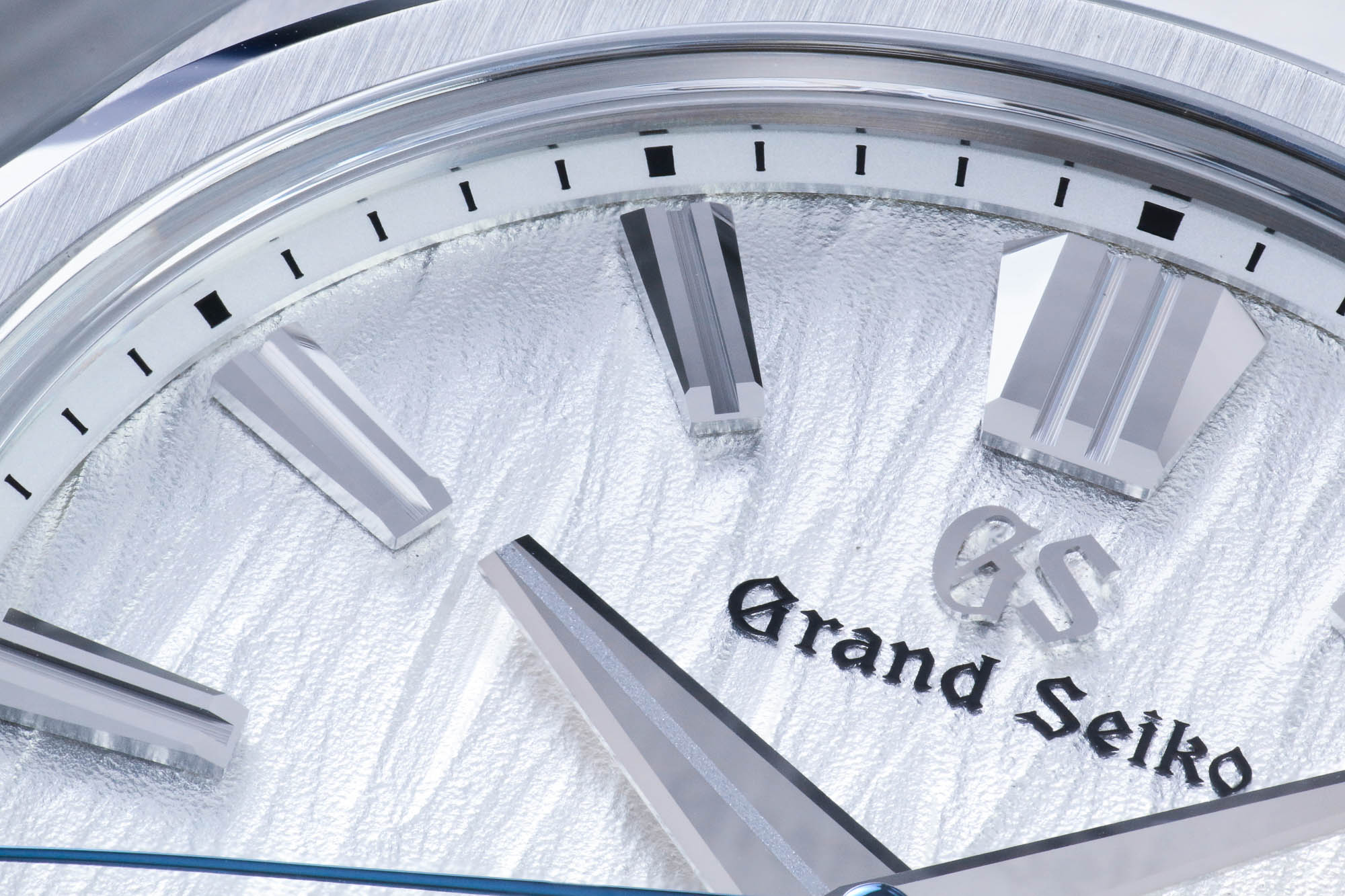 The hands and indexes feature incredibly complex geometry, lending the overall legibility of the dial.

Series 9 also pulls from Grand Seiko’s “Grammar of Design,” a standard first embodied by the iconic 44GS from 1967.  This guiding principle emphasizes flat surfaces, sharp defined angles, and perfect distortion-free mirror polishing to achieve an interplay of light and shadow that is expressive of Japanese culture.  In order to update this design for the modern era, Series 9 designer Kiyotaka Sakai decided to increase the amount of contrast in the case design, placing hairline finishing alongside zaratsu-polished surfaces (the 44GS, by contrast, generally features polished surfaces next to each other).  This, in a sense, makes the watch sportier and ideal for everyday wear. 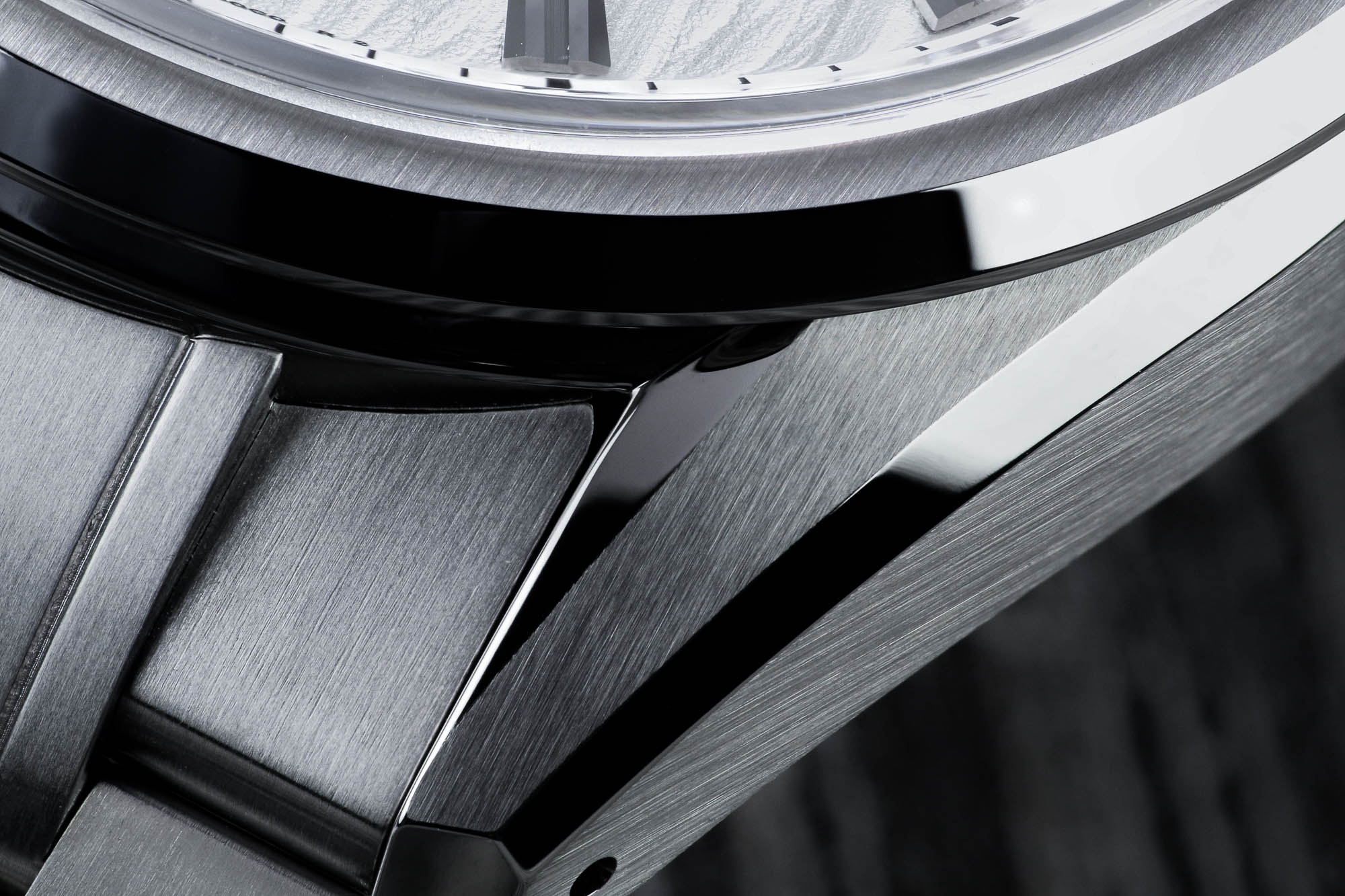 A delicate interplay of finishing - hairline surfaces contrasting against zaratsu-polished ones.

The bezel is distinctly different from that of many Grand Seiko watches. It is even more faceted than what one would generally find on other models, and it has a top surface adorned with hairline finishing.  It is quite different from the 44GS design code in that sense, but still has a striking sense of beauty, capturing light to contrast the mirror polish of the rest of the bezel.

Accompanying the bezel is a box-shape sapphire crystal, a type of crystal that is more commonly found on vintage watches. The modern-day box-shape is rendered in sapphire instead because of its durability. This shape is challenging to create, and this is especially true for Grand Seiko because it is important  for the crystal not to distort the dial and to allow for high legibility despite the curved and cylindrical shape of the glass. 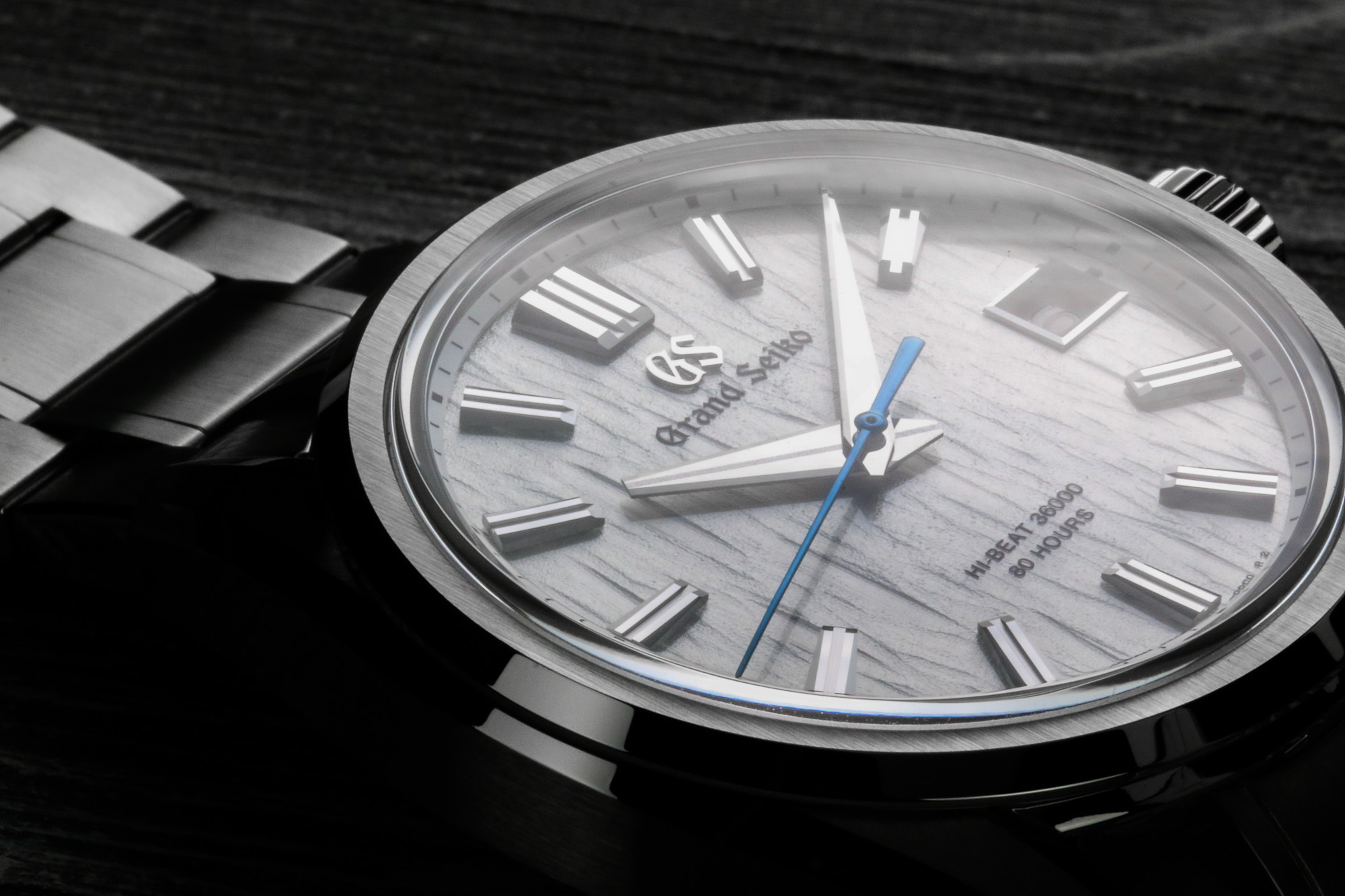 Rising from the top of the bezel, the prominent box-shape sapphire crystal recalls vintage watches.

The case is in stainless steel, which adds quite a bit of heft when compared to one of the most recognizable and iconic Grand Seiko watches, the “Snowflake” SBGA211.  The weight difference is substantial at 99g for the “Snowflake” and 178g for the new White Birch SLGH005, but the heft and stable feel of SLGH005 is sure to appeal to collectors.  The overall dimensions should as well, with a width of 40mm, a lug-to-lug length of 47mm, and a thickness of 11.7mm.  This includes the added height from the box-shape sapphire, which adds over 1mm to the thickness. 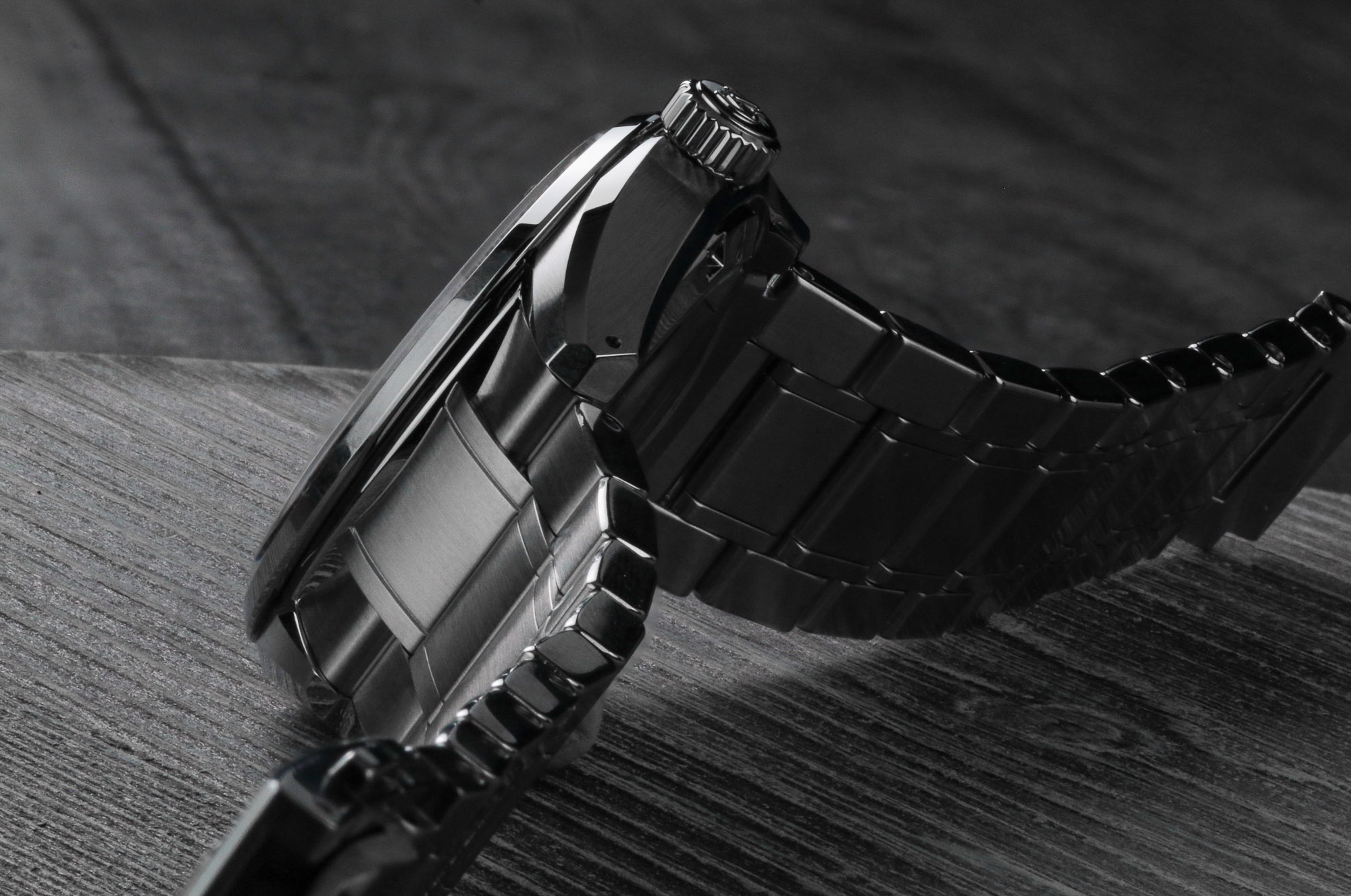 The stainless steel bracelet is a broad 22mm wide where it meets the case and it has a slight taper down to 20mm.  This, along with the newly designed lower placement of the crown that lowers the watch’s center of gravity, increases the stability and the overall feel of the watch on the wrist.  It truly feels unlike any other Grand Seiko you may have tried on before.  The bracelet has a new five-piece link design that gives it an almost integrated look with the case. It is nearly entirely hairline, or matte, finished, adding to its sportier and modern feel.  The only polished attributes on the bracelet are on the beveled outer edges and sides.

On the wrist, the Series 9 case has a highly ergonomic fit.

In 2020, Grand Seiko launched an entirely new mechanical movement, one designed from the ground up and unlike anything Grand Seiko has done in the past. It featured a new aesthetic and design, components, manufacturing and finishing techniques, and something incredibly rare, an entirely new escapement, solidifying Grand Seiko as a truly innovative watch manufacturer not just with its unique Spring Drive movement, but with a completely unique Hi-Beat 36000 mechanical caliber.  The 9SA5 is truly unlike anything on the market today. 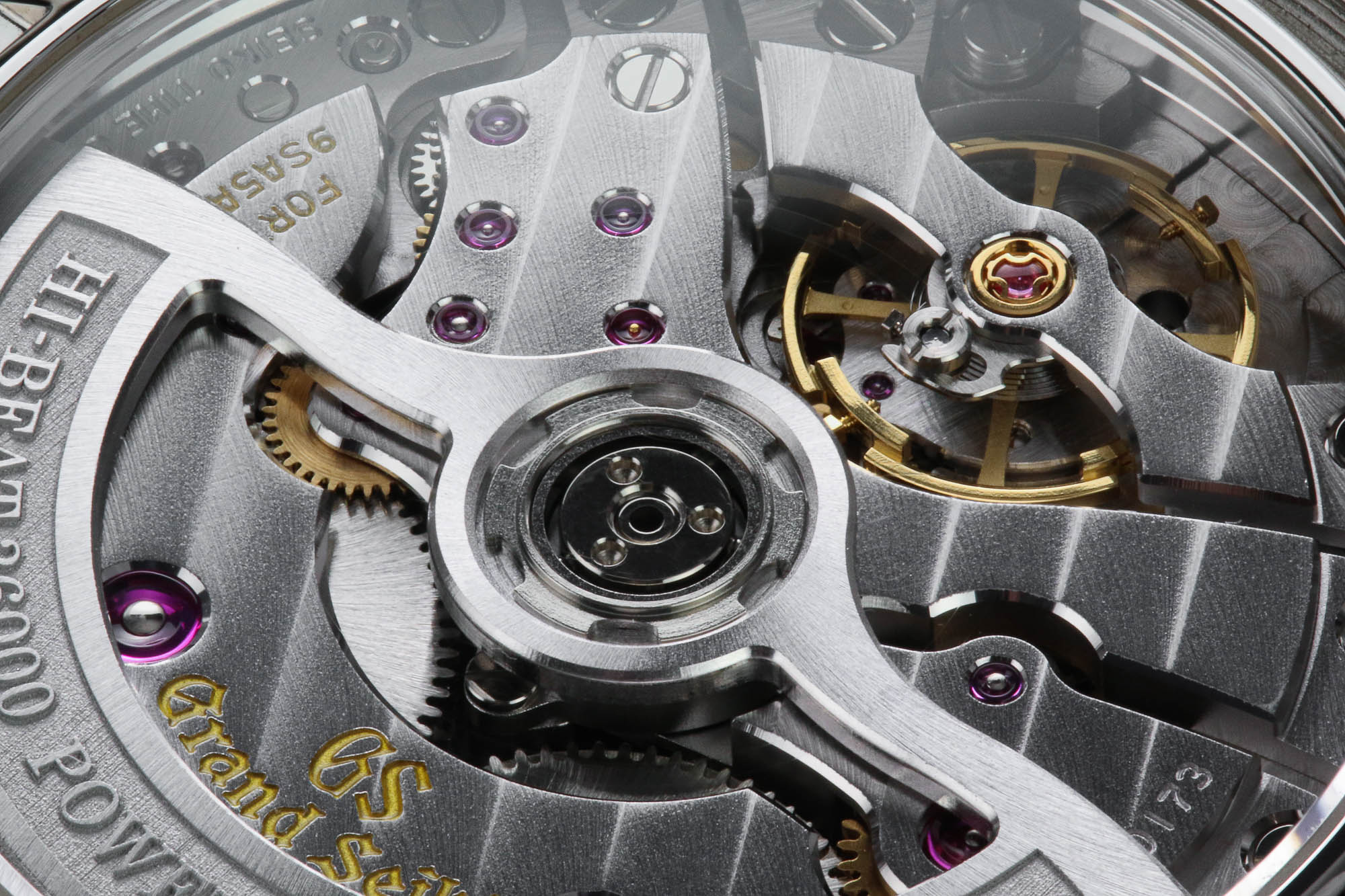 The driving force behind the movement’s design is energy efficiency, improving performance by making every aspect of the caliber to be as efficient as possible.  A huge portion of that comes from its Dual Impulse Escapement.

This new escapement design provides bursts of energy, both directly, like in a detent escapement, and indirectly, like in a club tooth lever escapement.  On each vibration, the balance receives energy. It happens indirectly through the sliding action of the escape wheel’s contact with the angled pallet jewel delivering energy through the pallet fork to the impulse jewel (similar to a lever escapement), and it happens directly to the balance via the escape wheel and a pallet located on the balance roller itself (similar to a detent escapement).  While this in itself is not unique, the design, and specifically the high efficiency of the design, is.

By using only two pallet stones on the pallet fork, one pallet roller and impulse jewel, a single escape wheel with only 8 teeth, and having each of these items fabricated through MEMS technology for ultra-high precision, the escapement is incredibly lightweight, which helps to stabilize its performance and increases duration of the power reserve.  Of course, this unique design has patents applied to it.

Another unique and patented aspect of the 9SA5 caliber is the Grand Seiko Free-Sprung Balance.  Grand Seiko watchmakers are masters of adjusting flat hairsprings with a regulator balance, which is how all other Grand Seiko watches were until the introduction of the 9SA5.  This helped in terms of serviceability, making it easier for adjustments to be made by a trained watchmaker so that aftersales service could be made more efficient.  A free-sprung balance, however, generally requires more work to adjust if one has to tinker with more than just the rate. 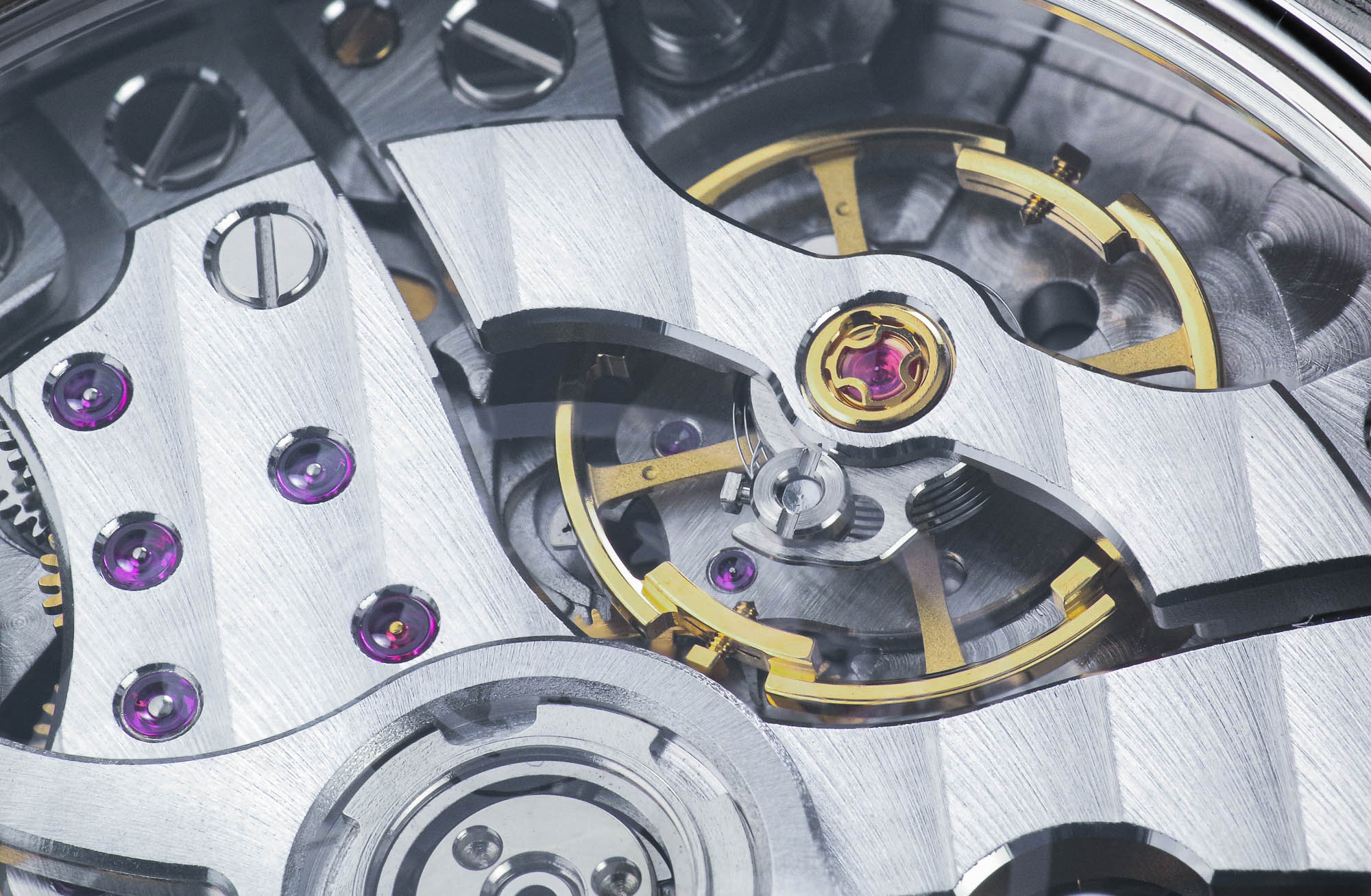 Generally, in a free-sprung balance, if there are issues with the isochronism, the hairspring would have to be manually adjusted.  But for the Grand Seiko Free-Sprung Balance, this was approached differently.  The 9SA5 incorporated a unique solution in that the stud that fixes the outer terminal curve of the hairspring can actually rotate and, in turn, can adjust the movement’s isochronism.

Incorporated into the Grand Seiko Free-Sprung Balance is the Grand Seiko Overcoil.  Another first in the brand’s history, the Grand Seiko Overcoil is not like the traditional Breguet variation.  This unique shape was determined over years of research and development and after 80,000 simulations of varying overcoil designs were tested.  Due to the shape of this new overcoil, the positional error, especially from horizontal to vertical, has been improved. 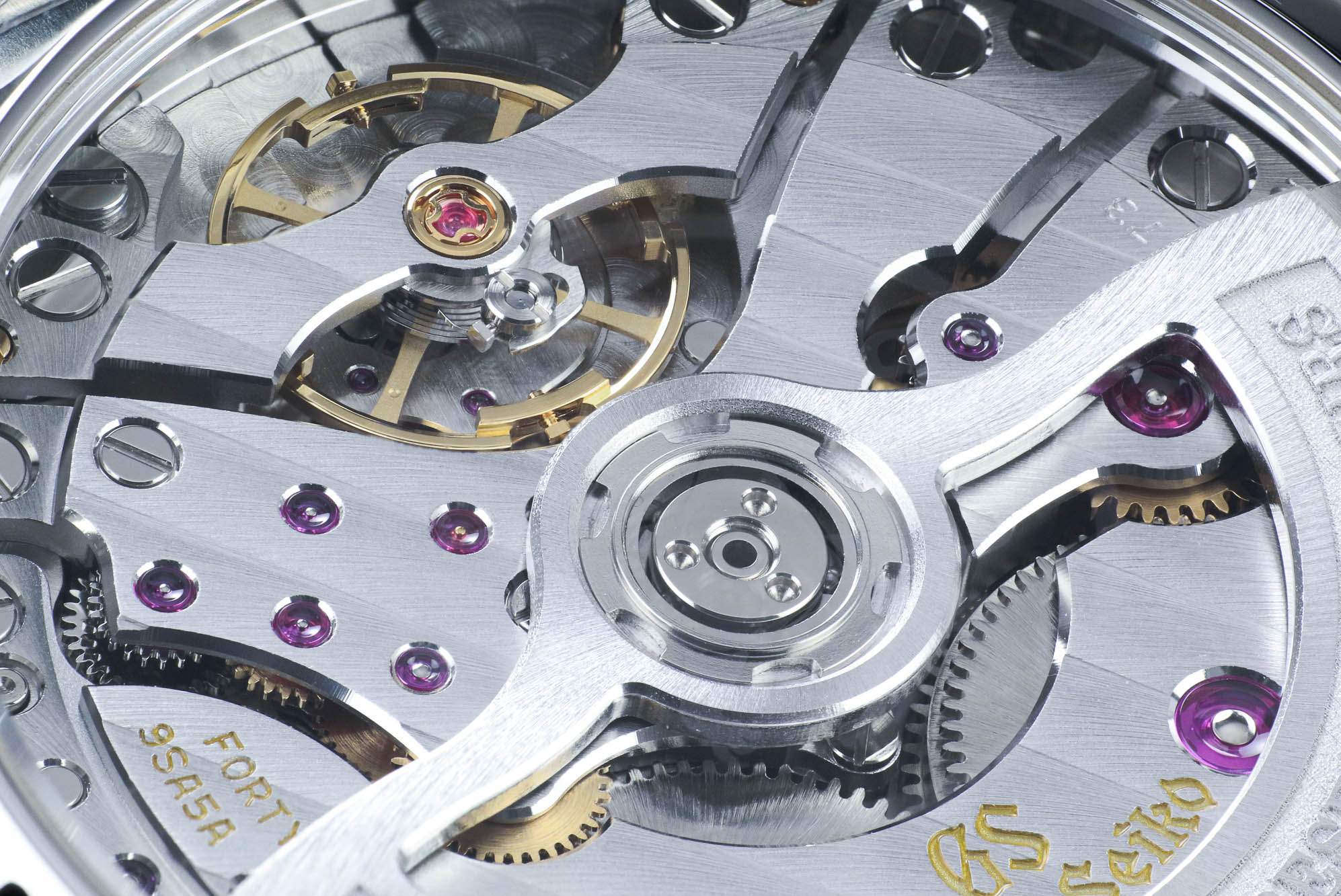 Two barrels, known as Twin Barrels, are featured in the 9SA5 and use long, thin mainsprings to achieve a power reserve of 80 hours.  The third main breakthrough, which incorporates the Twin Barrels, is the Horizontal Gear Train.  By utilizing this new design, all the gears in the gear train fall in parallel with the Twin Barrels and their ratchet wheels, allowing for a caliber that is 15% thinner than that of the previous generation 9S85 movement.  To be able to reduce the height with all of these additional features, plus having over 270 components while including an overcoil (which always adds height) is quite a remarkable feat in and of itself.  The 9SA5 incorporates other new features as well, such as MEMS manufacturing for additional components, an instantaneous date change, and a newly designed crown system that allows for the feeling of resistance of a manual-wind movement in an automatic watch. 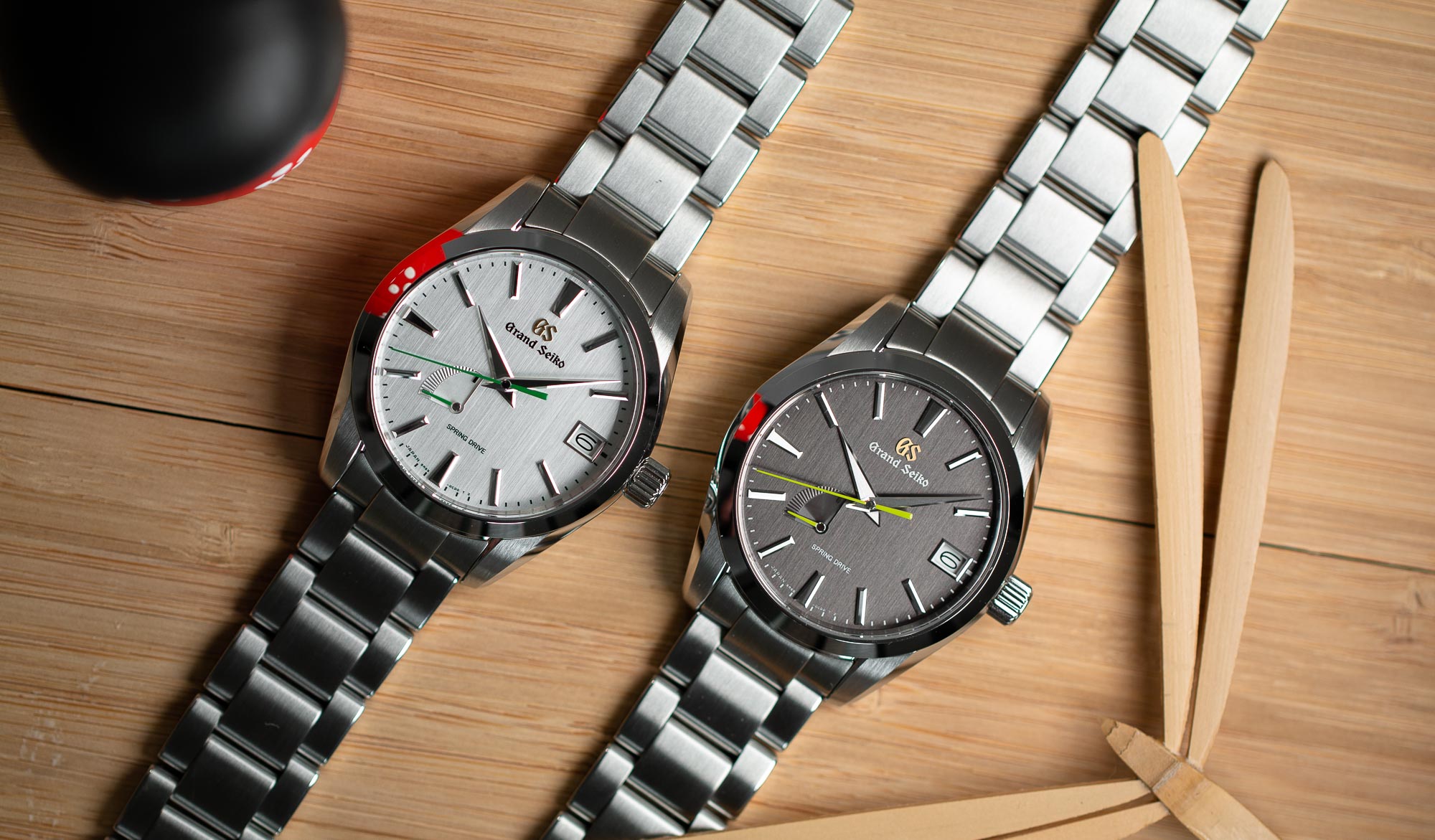 Grand Seiko Sōkō SBGA427 and SBGA49 - Inspired by Nature
We're taking a closer look at a collection inspired by the twenty-four sekki and the famed Arashiyama bamboo grove in Kyoto.
Read Article 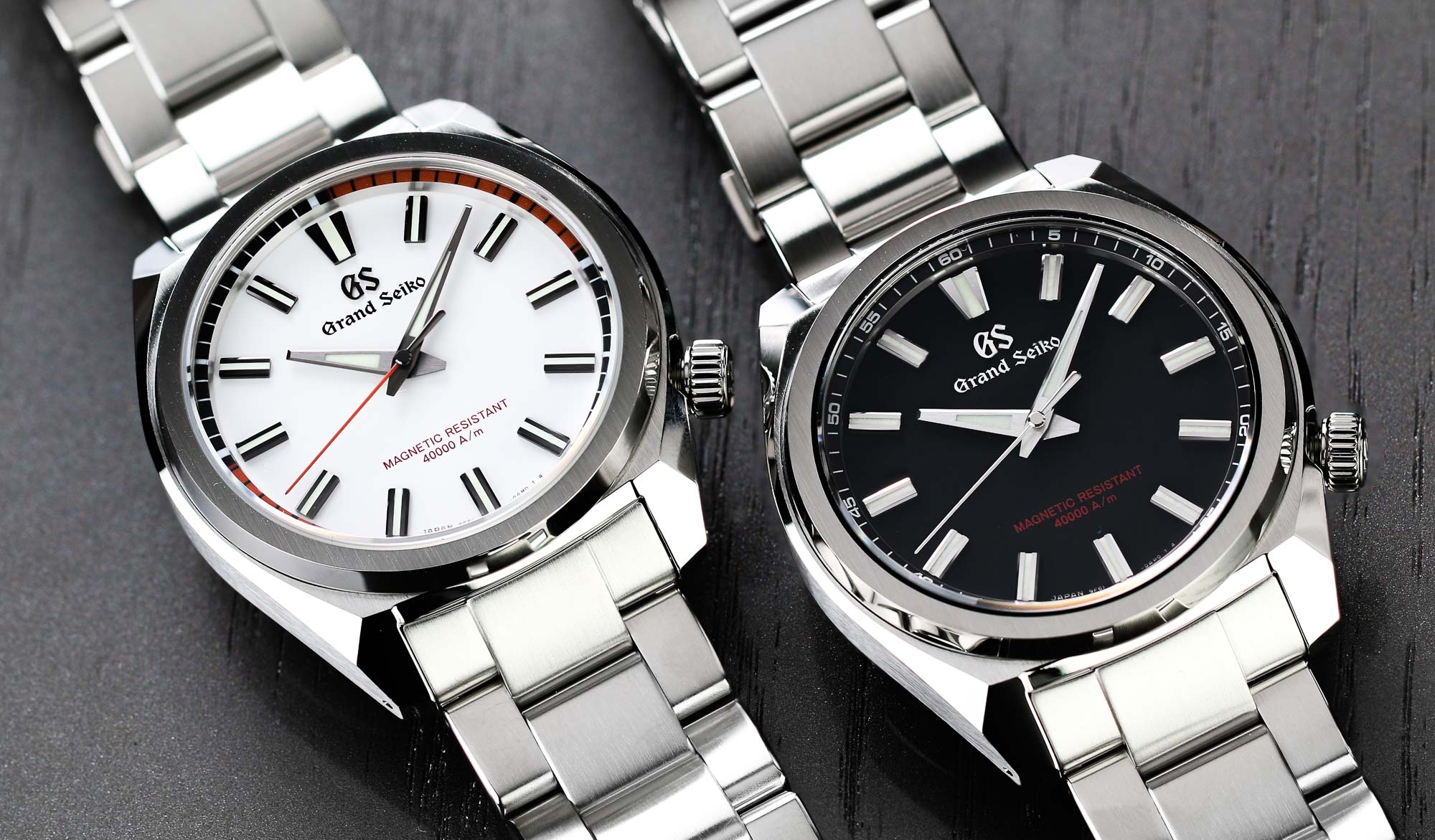 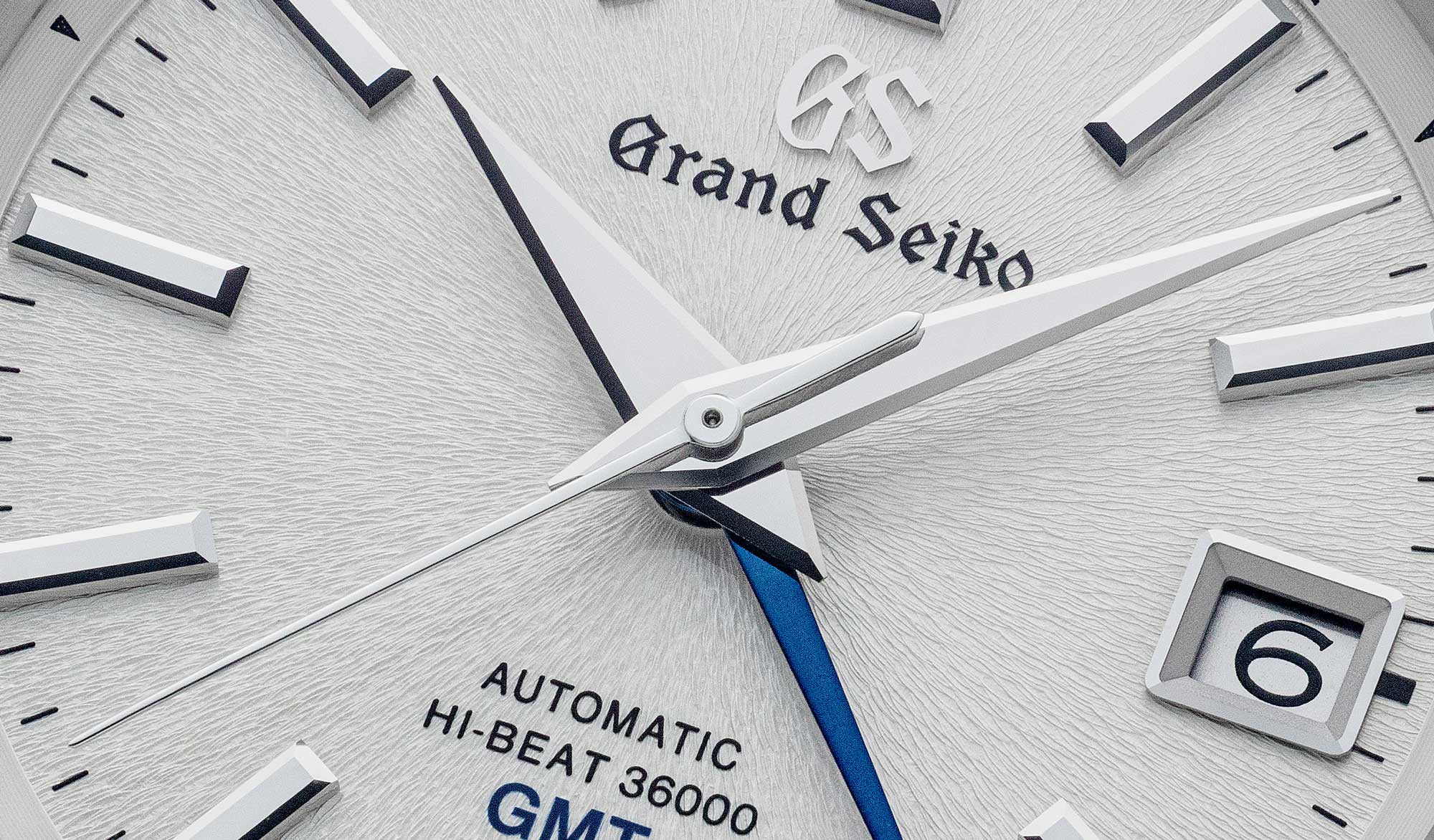 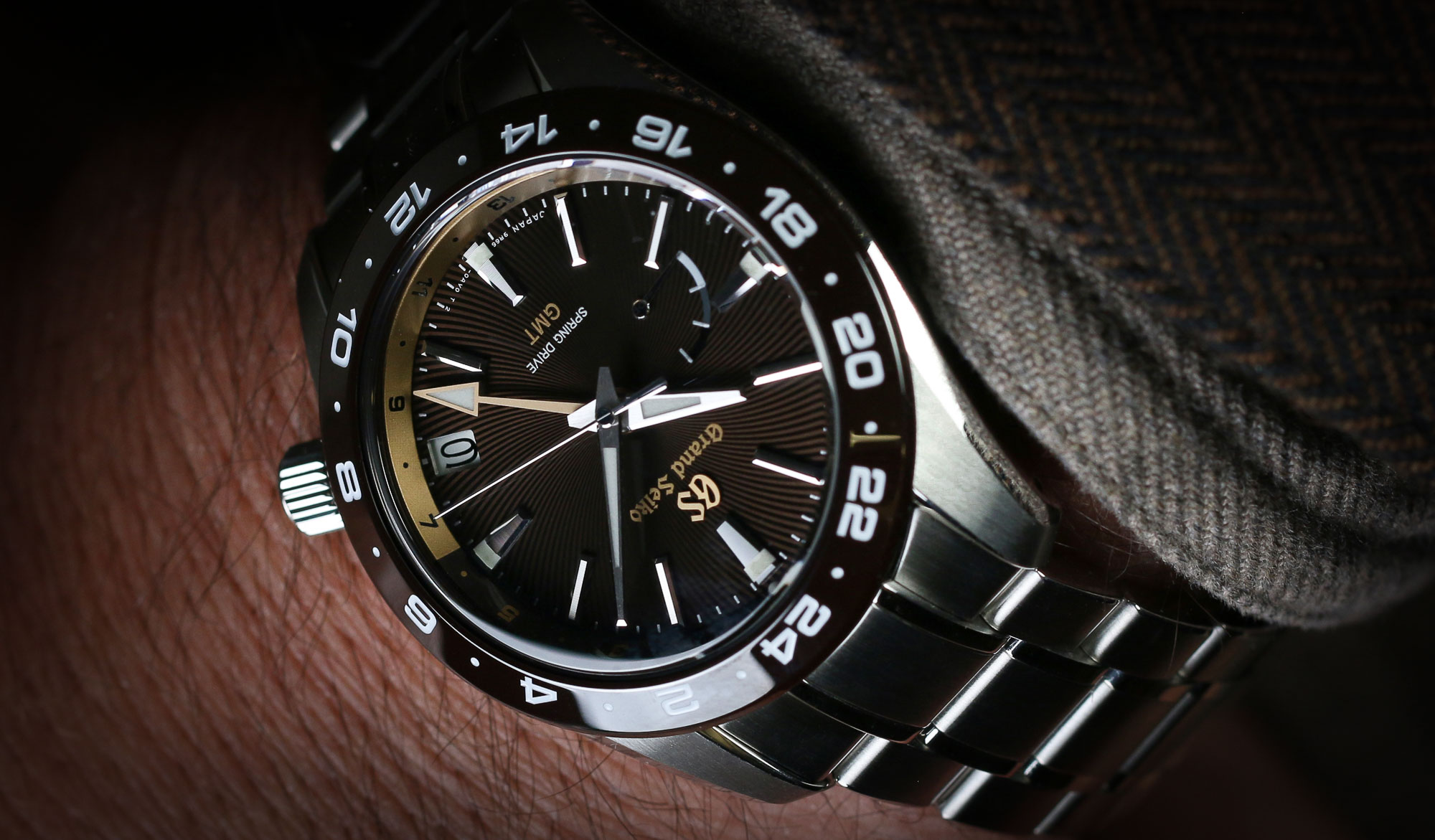 Grand Seiko Takes to the Sky with Ref. SBGE263
Inspired by the eagle, this US exclusive offers a new variant of the brand's popular 40.5mm Sport GMT unveiled this past summer.
Read Article