2021 will mark the 140th anniversary of Seiko, the company founded by Kintaro Hattori. In celebration of this milestone, Grand Seiko has released a watch inspired by Reference 3180, the first Grand Seiko watch ever made. With this modern interpretation of a classic Grand Seiko timepiece, Reference SBGW260 features an elegant 18k rose gold case, a warm cream dial, and a manual-winding caliber with some notable upgrades. 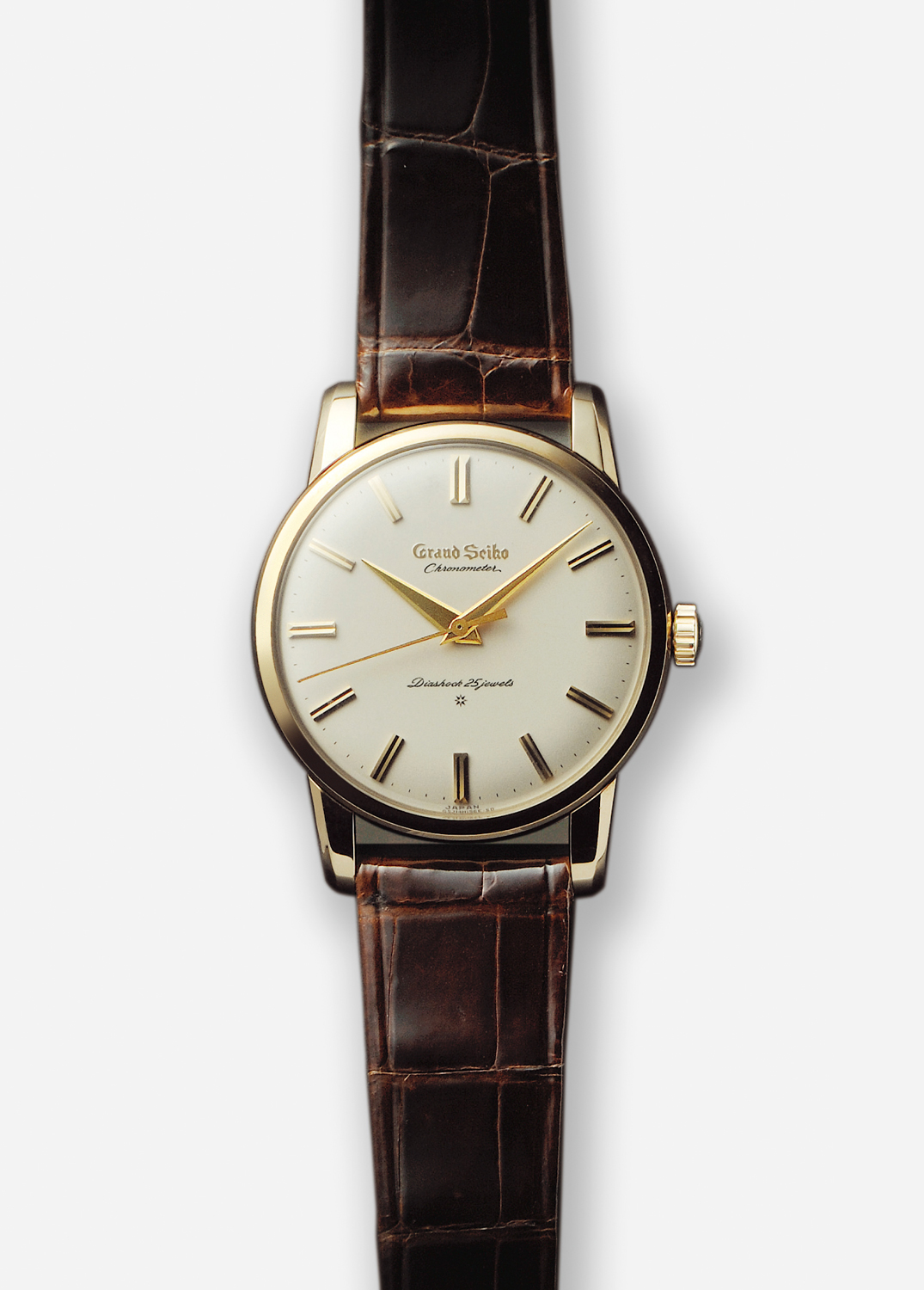 Launched in 1960, the first Grand Seiko was a major leap forward, boasting a new movement (Caliber 3180) with all sorts of impressive technical features for the time, among them improved shock resistance, hacking seconds, and a fine-adjustment regulator. That timepiece was also incredibly accurate, with the movement produced in compliance with the Bureaux Officiels de Contrôle de la Marche des Montres in Geneva, the most respected chronometer testing body at the time. Design wise, the first Grand Seiko set some important standards, including the Grand Seiko logo rendered in a Gothic font, as well as the diamond-cut markers and broad hands, today considered to be defining features of Grand Seiko timepieces. The case back also introduced the Grand Seiko lion emblem, which remains the brand’s symbol to this day.

In the years since, Grand Seiko has released a handful of modern interpretations of their first timepiece. In 2001, there was Reference SBGW004 made for Japan, and there were  limited editions in 2013, 2017, and then again earlier this year, this time with three regular production models (SBGW257, SBGW258, and SBGW259). Ref. SBGW260 continues this trend. 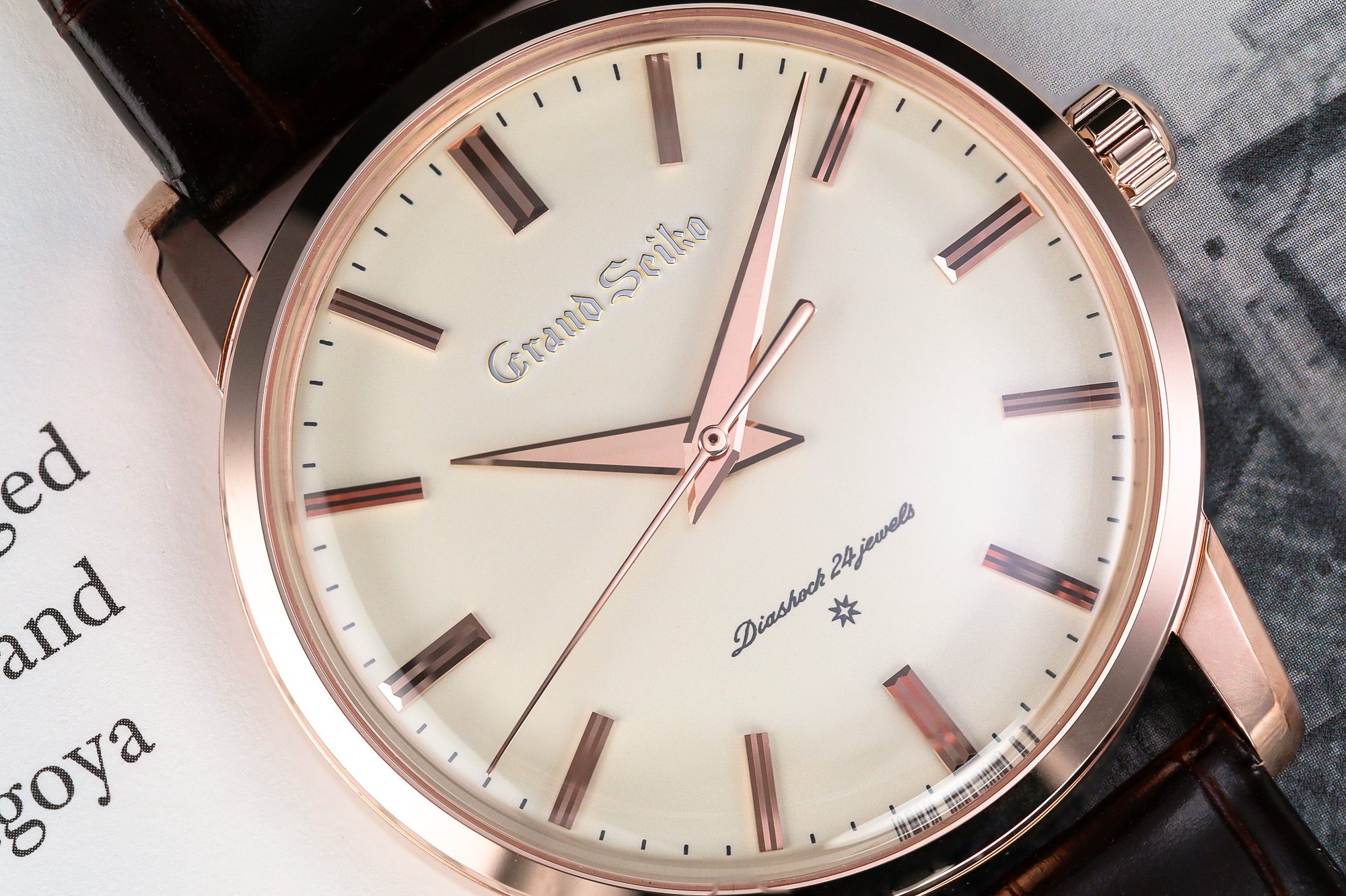 A masterclass in classic proportions.

Measuring 38mm in diameter and 10.9mm tall with a dual-curved sapphire crystal, the case is an excellent modern interpretation of the 3180’s classic proportions. The matte, wide-open dial is highly legible, with razor-sharp hands and diamond-cut markers (the latter rendered in 18K rose gold) making reading the time easy even at a glance (legibility is, after all, a key tenet of Grand Seiko design). The second and minute hands are ever-so-slightly curved, done so as to match the gentle slope of the dial. 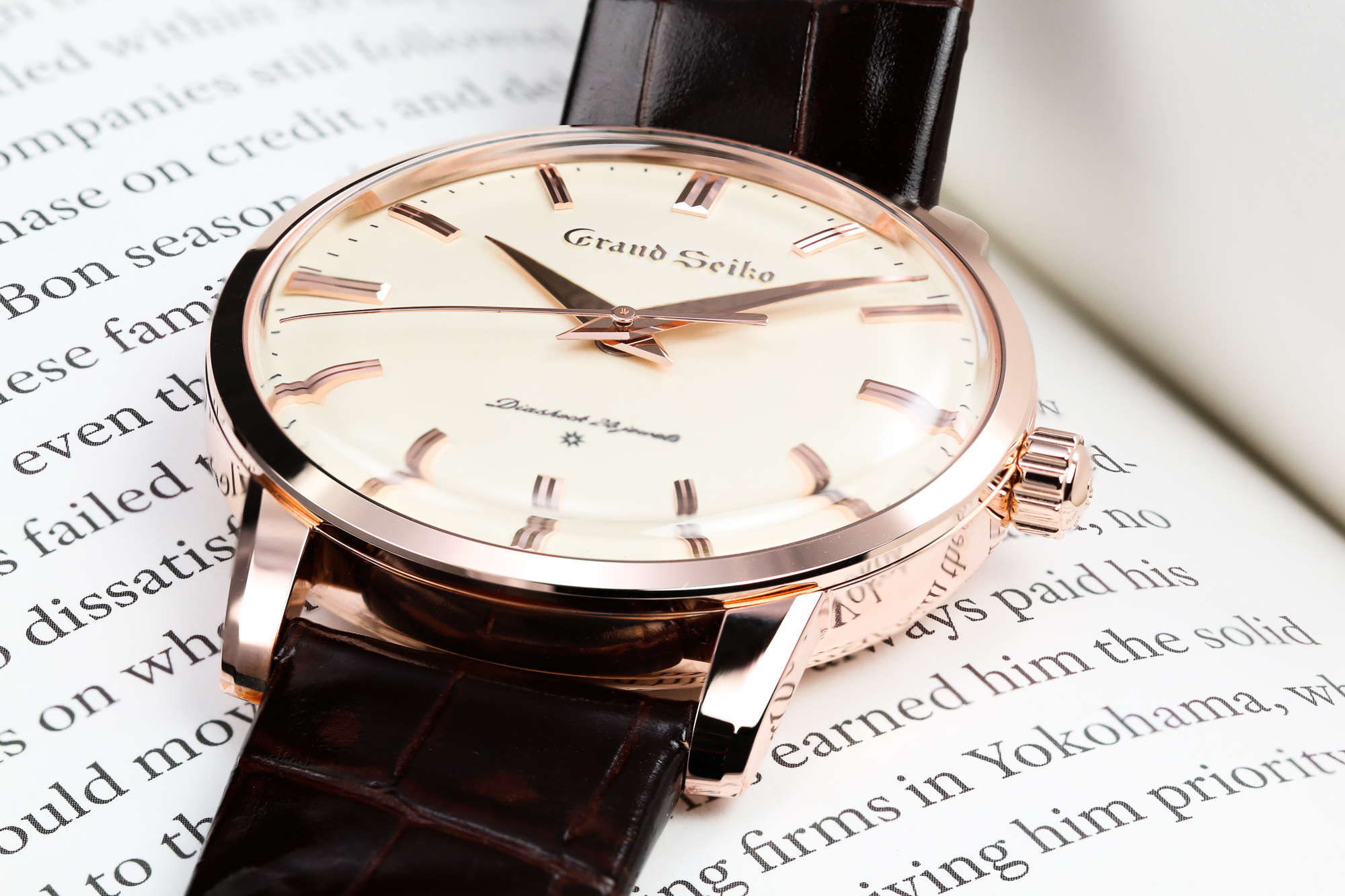 The dual-curved sapphire crystal recalls the domed acyclic of the original. 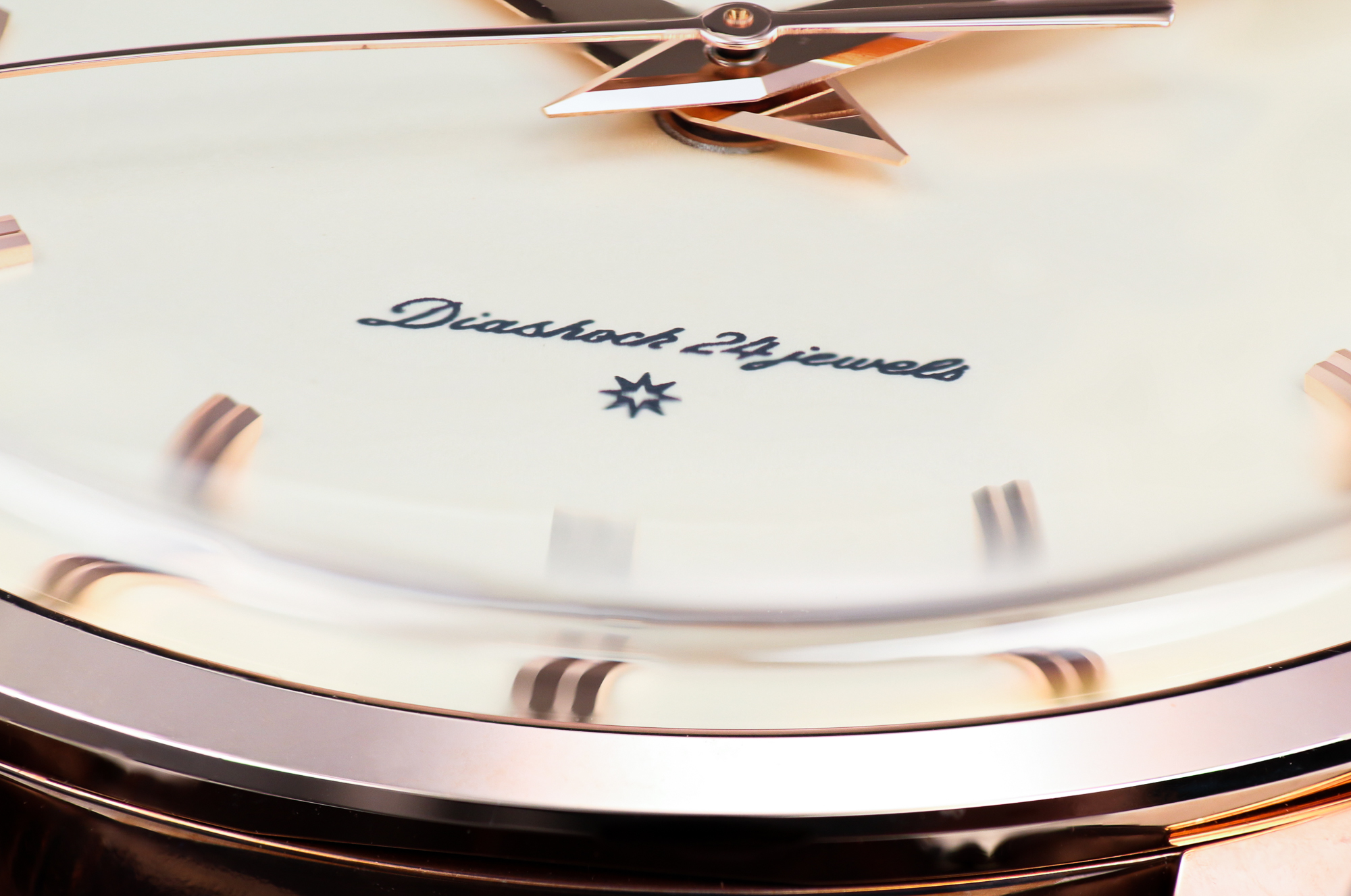 The star above 6 o'clock indicates that the indexes and hands are made of precious metal. 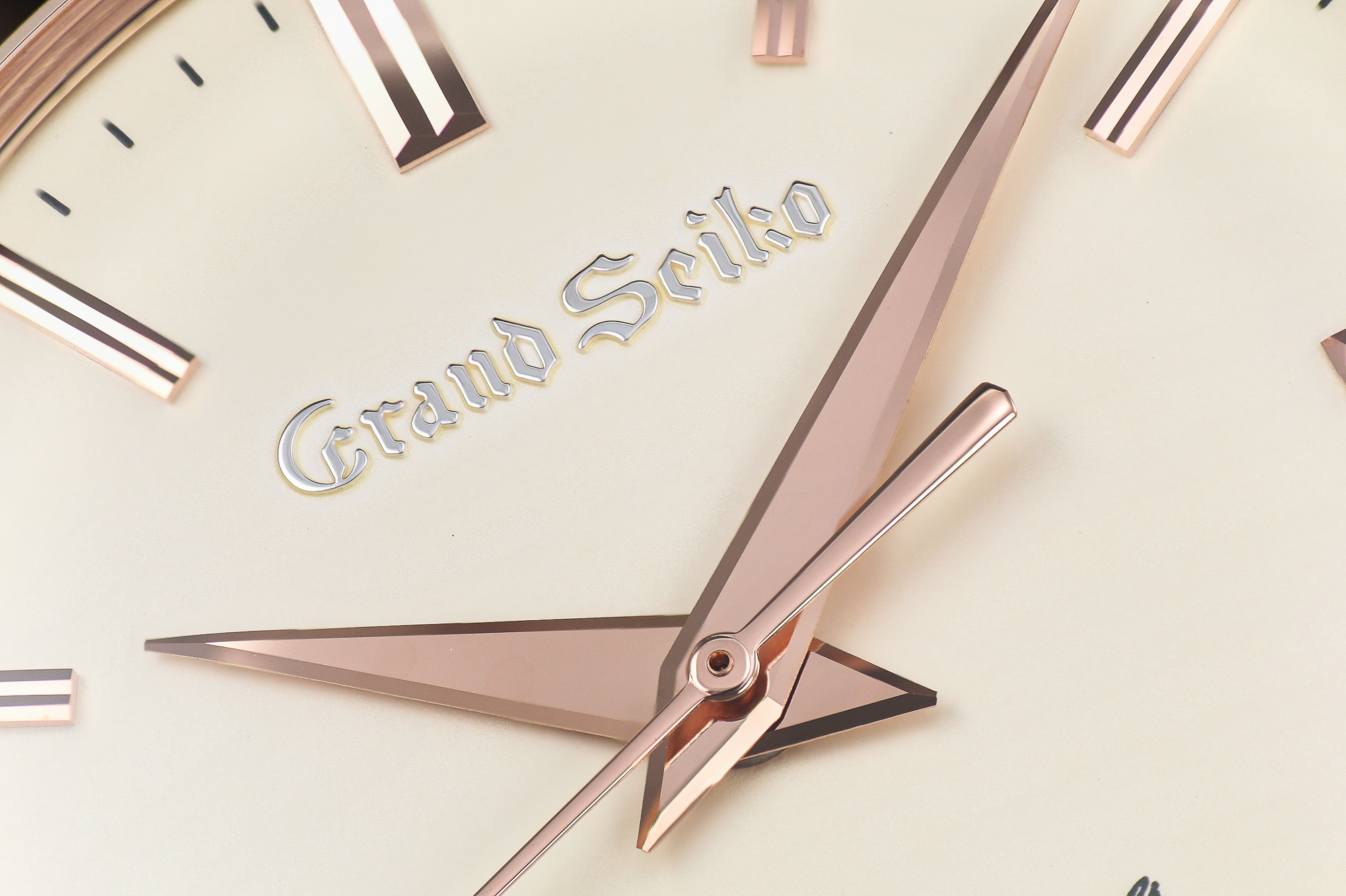 From the hands to the indexes, all the dial details are sharp and precise.

Powering the watch is the manual-wind Caliber 9S64 (rated to +5/-3 seconds a day with a power reserve of 72 hours), though the version of the movement used here features some notable upgrades from the standard 9S64. Aesthetically, the finishing here feels more like the sort one would see coming out of the Micro Artist Studio, the atelier that produces high-end Grand Seiko and Eichi Spring Drive calibers. Hairline finishing replaces the striping found on the bridge of the standard 9S64, and there’s eye-catching beveling done to the edges of the large plate. Heat-blued screws and a gold plate featuring the Seiko “S” adorn the movement and add a splash of color. The trademark “S” is significant here because it was registered by Kintaro Hattori in 1900 as the symbol of the Seikosha factory. All of this decorative embellishment is visible through an open case back. 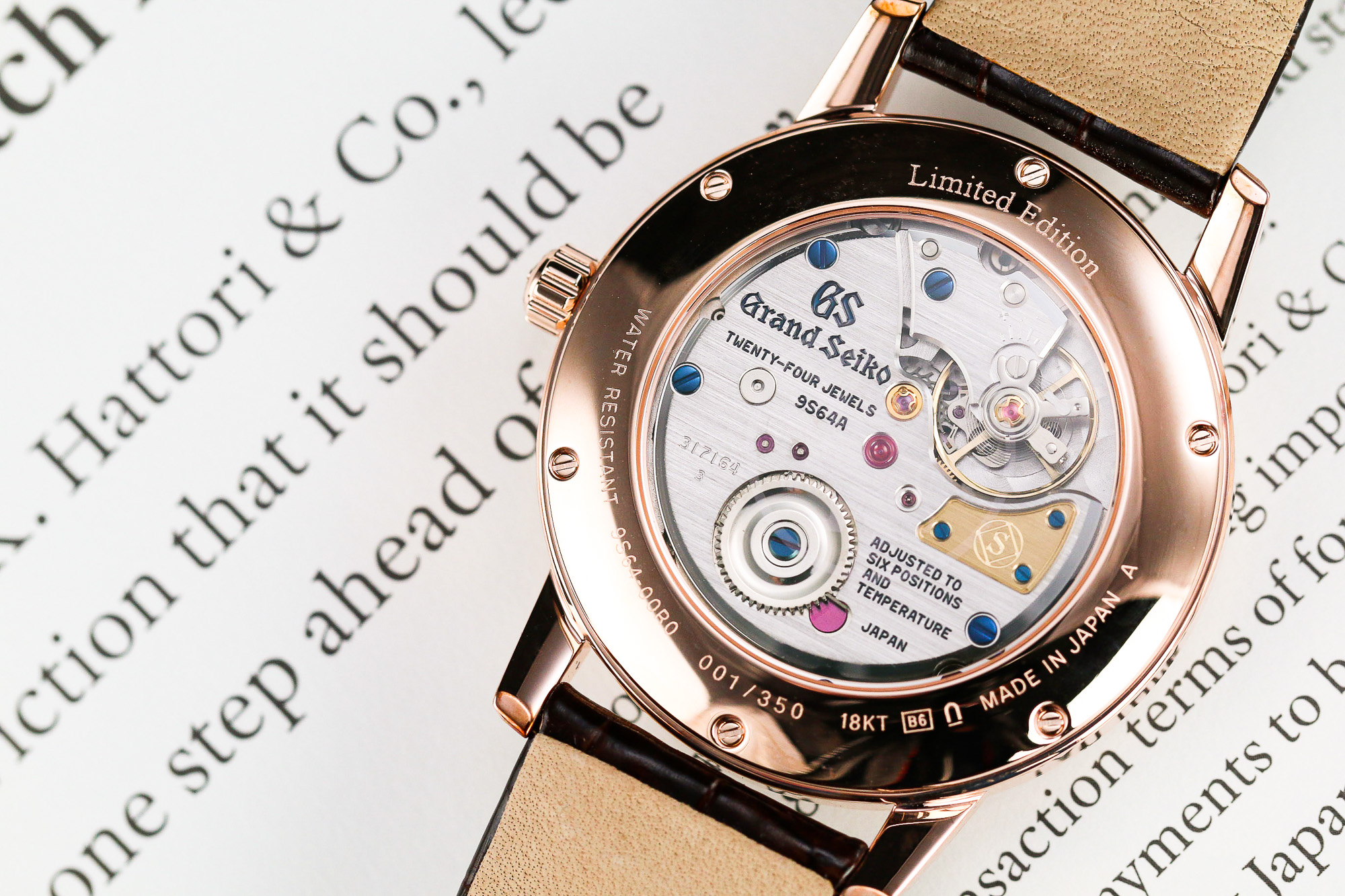 The special Caliber 9S64 visible through an exhibition case back. 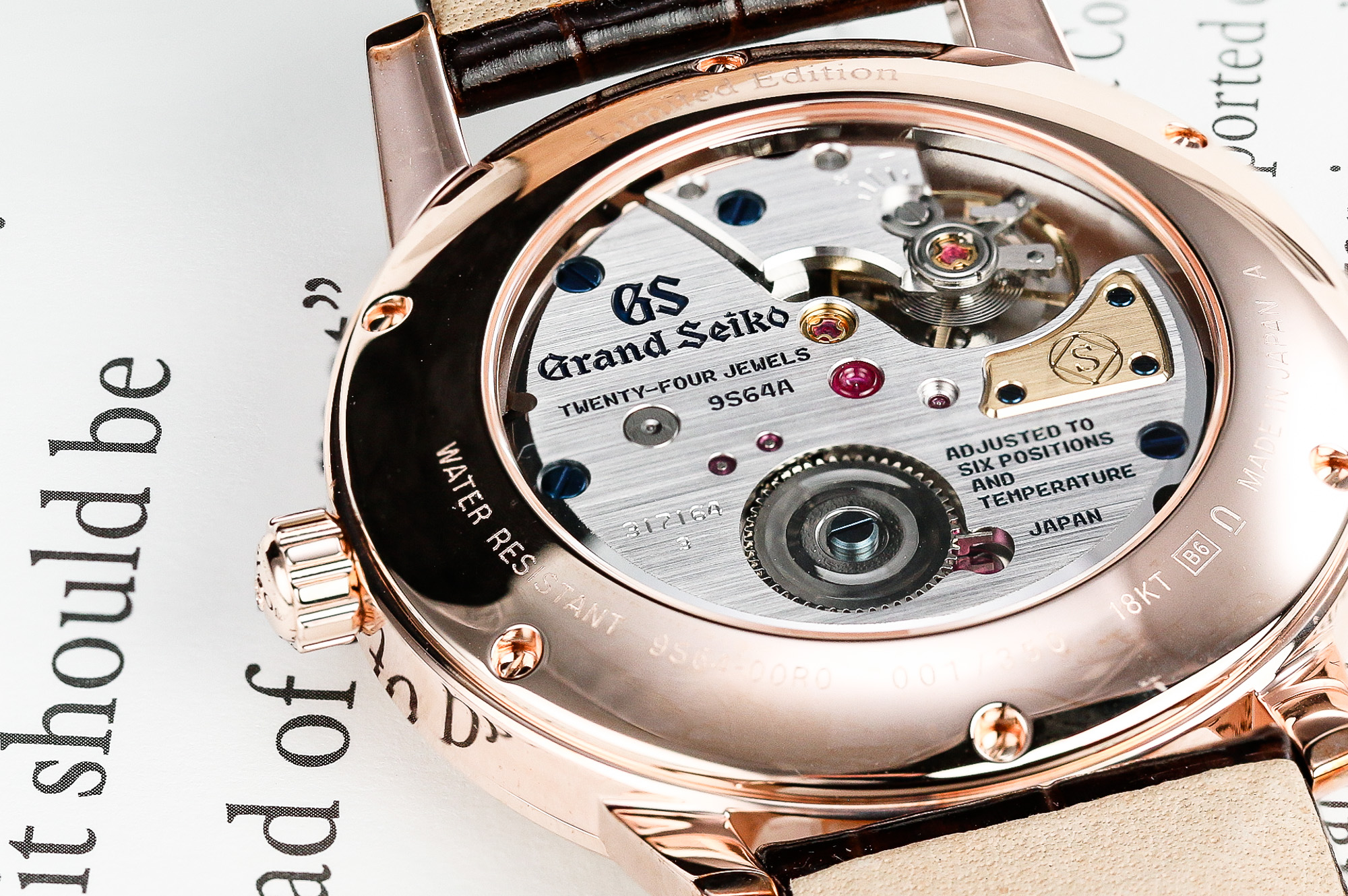 This version of the 9S64 features a higher level of finishing. 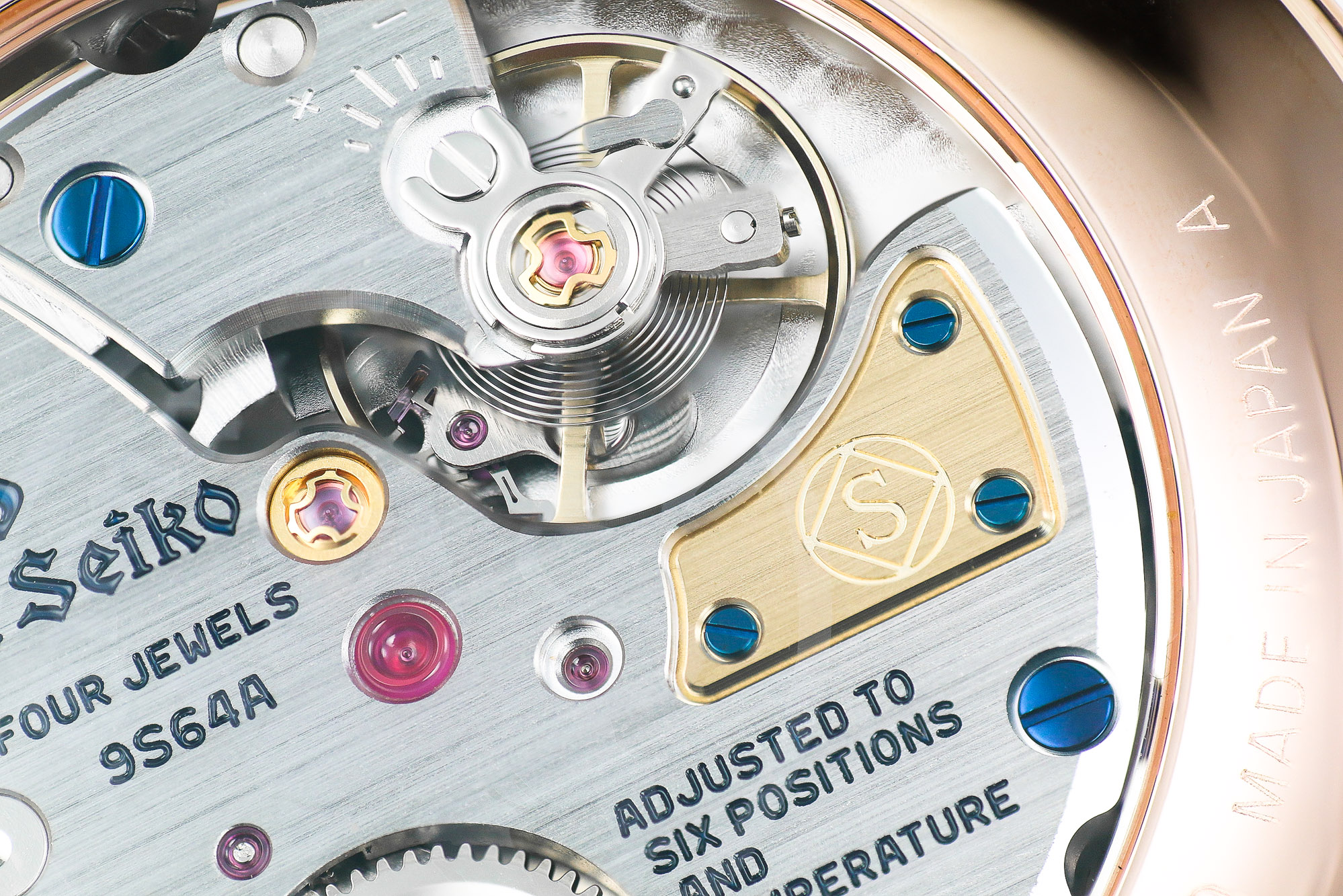 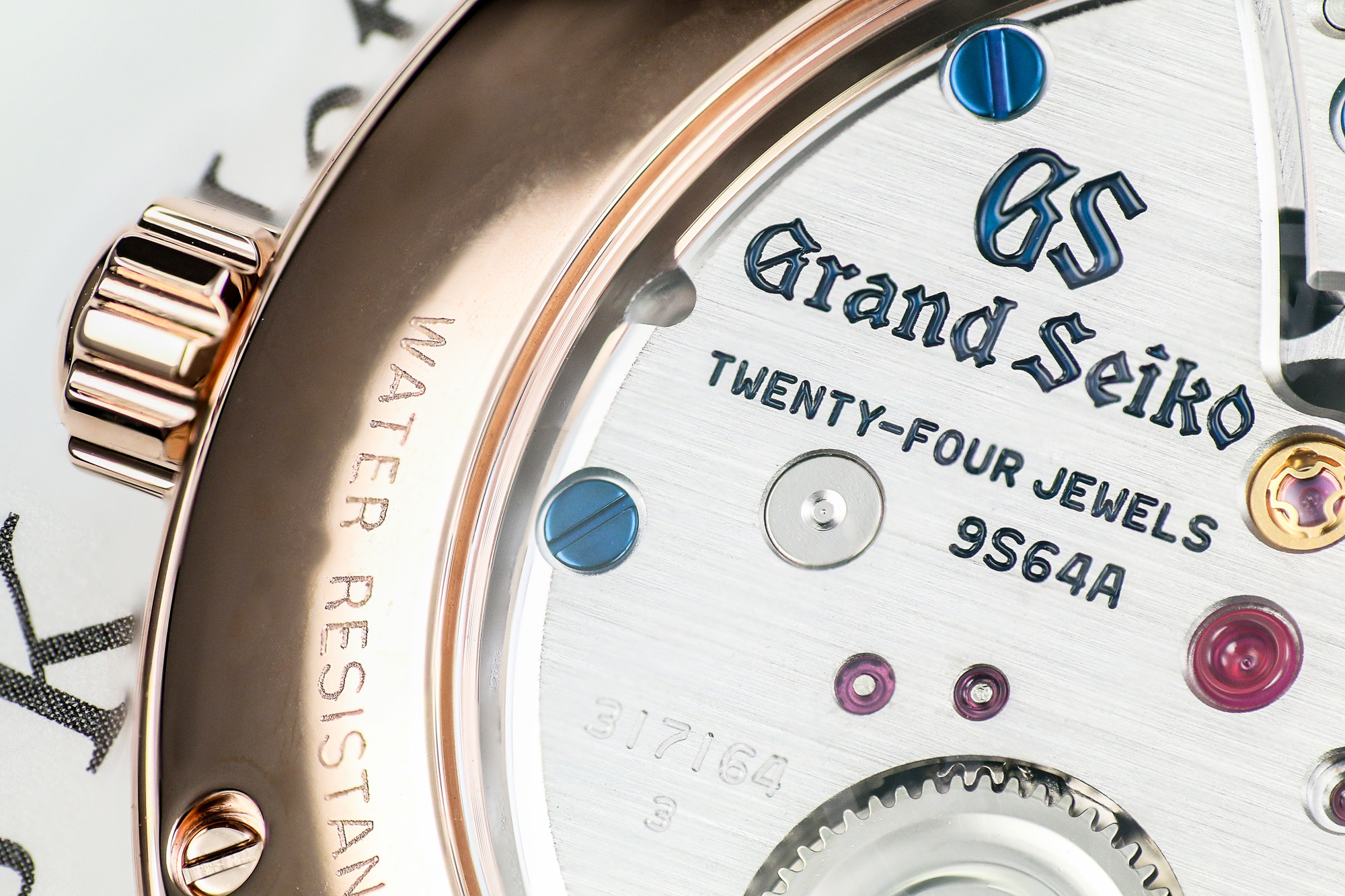 The watch comes mounted on a brown crocodile strap with a 18k rose gold three-fold clasp with a push-button release.

Reference SBGW230 is a limited edition of 350 pieces worldwide. 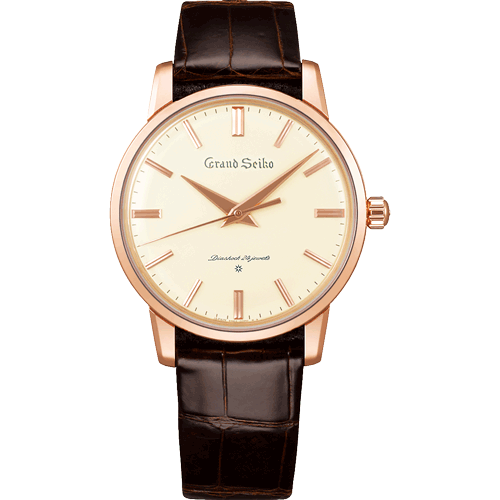